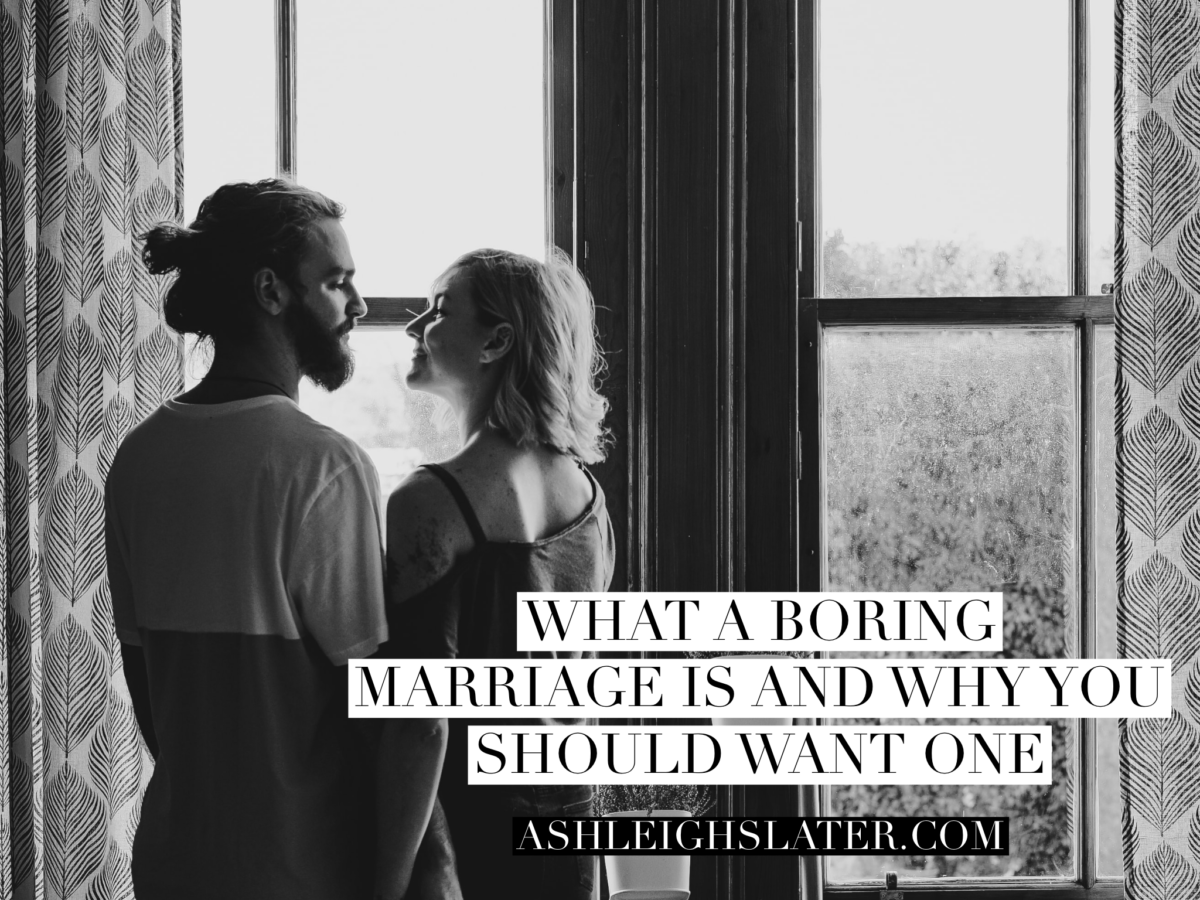 Boring marriages are highly underrated. Yep, you read that right. But just in case you need me to type it again, here you go:

I know I must sound crazy. Boring — really? Boring isn’t even remotely close to the adjective most of us want modifying the noun marriage — especially if it’s describing our own. But before you stop scrolling, give me a chance to explain. You might like what you read.

I’m not talking boring as many of us narrowly define the term: dull, uninteresting, tiresome. I confess that Ted and I have often agreed that we’re glad we have a “boring” marriage. But we don’t mean that if you hung out with us or listened to our stories, you’d start looking for excuses to go home. At least we hope you wouldn’t!

So, what do I mean? What is a boring marriage? Here are a few characteristics that make a marriage “boring.”

3 Characteristics of a Boring Marriage

Drama — or as Suzanne Hadley Gosselin defines it, “overblown emotions and actions” — isn’t synonymous with conflict. Although we often like to think that the two words are interchangeable, they’re not. While, yes, it’s true that all drama does include some kind of conflict, not all conflict results in drama.

Every marriage has conflict, the occasional disagreements that need to be worked through together. In James’ New Testament letter, he gives us insight into what causes these quarrels: Our selfish desires war within us and drive us to sometimes fight with each other (James 4:1-3). The thing is, no matter how far along we are in our walk with the Lord, we’ll always have some degree of selfishness in our hearts — and so we’ll often have some degree of conflict.

Where there’s an authentic bringing of yourself to the relationship, conflict is bound to happen. And with it comes the opportunity to grow closer and stronger as you face disagreements together as a team.

So how do you know whether the conflict has turned to drama? Here are some possible indicators:

But in a boring or drama-free marriage, conflict tends to look more like this:

A boring marriage doesn’t have drama; what it does have is two people committed to approaching and tackling conflict in a healthy, mutually beneficial way.

This heading may have put you on the defensive. I get it. We all want to feel personally fulfilled, right? Especially in our most important human relationship. And there’s nothing wrong with wanting that to a certain extent. However, and this is a big “however,” once we’ve made that “until death do us part” covenant, a driving need for personal fulfillment has the potential to add a lot of unwanted drama to marriage. And boring marriages are drama-free zones, remember?

Look back at the first couple, Adam and Eve. God created them to be united, cooperative, and committed. And they were … until, well, they weren’t. When they started seeking personal fulfillment over God’s instruction, everything fell apart (Genesis 3).

Fast forward to today. We all either know or know of couples where one or both parties have determined that personal fulfillment is more important than the commitment they made to each other. When this happens, marriages crumble and families are destroyed. There’s the spouse who decides they made a mistake and didn’t marry their “soul mate.” Or the one who feels held back from chasing their dreams. They need freedom … and decide divorce is the answer.

Now, let me clarify here. When I say commitment outweighs personal fulfillment, I’m not advocating that anyone remain in an abusive relationship. If there’s abuse, it’s vital to get safe and find help. If there’s dysfunction or addiction, it’s helpful and necessary to seek biblical counseling. I’m specifically talking about when couples decide their spouse doesn’t make them “happy” or “fulfill” them anymore.

Obligation isn’t a dirty word. And while feelings matter, marriage isn’t meant to be built on a foundation of how we feel about each other at any given moment. That’s why in a boring marriage, commitment outweighs feelings and personal fulfillment. It remembers that “you” and “me” have become “us.”

We are subscribed to the streaming service Discovery+ and often watch Chip and Joanna Gaines’ Magnolia Network. Can I just say that I love this couple? Our family even made their Magnolia Market a stop on not one, but two of our cross-country road trips. Chip and Jo are definitely what our culture would label a “power” or “superstar” couple.

Jeff and Alyssa Bethke are, too. If you’re not familiar with the Bethkes, they live in Hawaii and were on a reality TV show. They also write books and e-courses, host a podcast, and are social media influencers. Plus, they’re doing it all while raising two kids. Impressive, right?

I’m grateful for couples like the Gaineses and the Bethkes. Both are amazing teams that God is using to encourage others. But I think when it comes to evaluating a potential mate, too many of us feel the pressure to look for someone who can be our Chip or Jo. You know, a spouse we can do something high-profile with or at least something exciting and fulfilling.

But here’s the thing: God doesn’t call all of us to be a power couple — and that’s OK. There’s nothing wrong with marrying a plumber or an accountant, serving faithfully together at church, and spending Friday nights in your pajamas watching Discovery+.

I love a quote that Alyssa Bethke posted on Instagram. “God never told us we needed to be successful,” she wrote. “He told us to be faithful. And it’s in that faithfulness that we are successful.” While yes, that’s coming from a power couple, it’s wisdom plain and simple. It’s not position or prestige as a couple that matters most. It’s obedience and devotion to the God who brought you together in the first place.

3 Practical Ways to Have a Boring Marriage

Maybe you’re starting to think a boring marriage doesn’t sound so bad after all. Well, here are three ways you can have one.

Sometimes couples spread themselves too thin. The pursuit of the next great thing — even if it’s being chased together — has the potential to take priority over the relationship itself. But boring marriages don’t let that happen.

When I was writing my two books a few years ago, I had friends ask me, “How do you balance it all?” My response was: “I don’t.” There’s no such thing as having it all. When we say yes to everything, there’s a good chance something will suffer or be neglected. It’s essential to pick your “yeses” wisely.

For us, there have been times when I’ve scaled back on my writing or we’ve taken a break from serving in areas we enjoy, such as premarital mentoring. Often what we’re saying no to is a good thing, just not the best thing for that particular season of our marriage.

I once heard someone say that comparing ourselves with others isn’t all bad. On the contrary, it helps us strive to do better. But are we choosing comparisons that are not only positive but also realistic?

If we compare ourselves and our marriages to Chip and Jo or Jeff and Alyssa, we’re probably going to feel like we come up short. We may start striving to be a power couple when maybe that’s not what God has for us.

Instead, we can look at a couple at our church who quietly walks out their marriage with mutual respect and an unwavering commitment. Or maybe we seek to learn from our parents who have shown us what it means to navigate the highs and the lows of life hand-in-hand. Accept comparison but choose it wisely.

3. Pick your friends and advisors wisely.

I read a social media post from author Kari Kampakis on parenting teens. The wisdom she shared works in marriage too. She wrote: “As your kids get older, your circle of advisors gets smaller.”

What’s that mean for marriage? I take that to mean that there are many opinions on the right way to walk out marriage and the best way to love a spouse … but that doesn’t mean all of them are helpful. Not all of them are biblically centered or put commitment above personal fulfillment. Because of this, it’s so important that we choose our close friends — the ones who often become our advisors — wisely.

While I unpack this in-depth in my book Team Us, here are three characteristics we can look for when we pick our friends and advisors:

When a marriage hits rough patches — and every marriage will, even a boring one — these are the friends and advisors who help us finish well. They encourage us to say no to drama and yes to commitment.

The Beauty of Boring Marriages

What do you think? Are you with me on boring marriages being underrated? Are you up for the challenge to reject the excitement of drama and embrace the security of stability? Maybe you’ve come to see that these kinds of marriages really aren’t that boring, but can be beautiful. Beautifully boring.

“May you live in interesting times” goes the old saying. Ironically, it’s meant not to be a blessing but a curse. It reminds us that interesting times are often times of trouble — and I wouldn’t wish that on anyone. So instead, let me leave you with this: May you be blessed with a boring marriage, one characterized by comforting commitment and a lighthearted lack of drama.