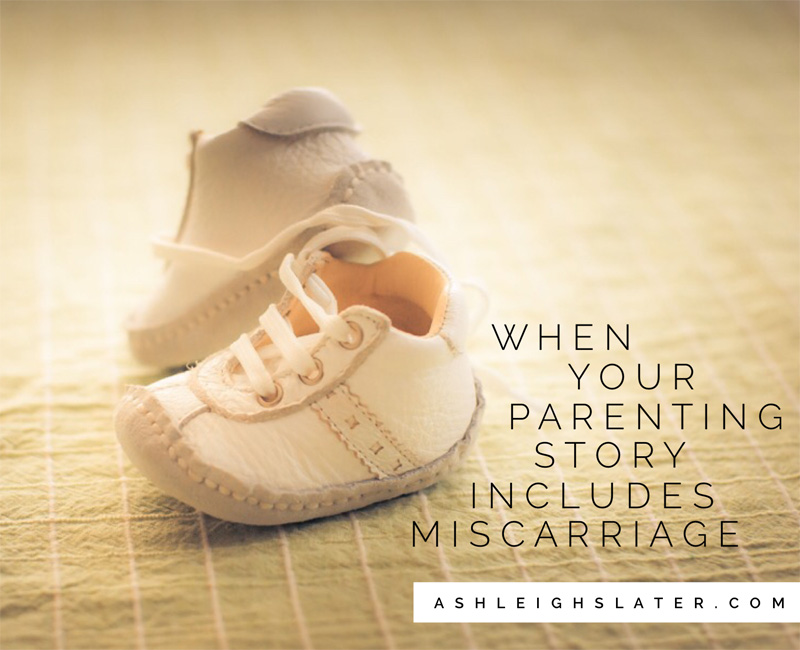 Maybe your parenting story includes miscarriage. If so, you are not alone.

Seven years ago this week, we learned that our fourth child, whom we named “Noah,” died by miscarriage. I wrote this piece a couple months later, in June 2010, about our miscarriage. I thought it was fitting to repost it on my blog today.

We named her Noah. I will never forget her.

News of her death came at my 10-week OB appointment. I woke up that fateful Wednesday to the thought, Today your life is going to change. Two hours later, it did. A doppler failed to detect a heartbeat; an ultrasound revealed a body much smaller than my due date required. The doctor estimated she had stopped growing at five weeks gestation.

For five weeks — 35 days — I was unaware that I was a walking tomb. I avoided caffeine, exercised with care, and jotted down lists of potential baby names, not knowing her tiny body had ceased to grow within mine.

A week after my D&C, a friend asked my husband Ted, “How’s Ashleigh doing? Is she getting over it?”

Life felt as if it played out in a bad dream; a nightmare from which I longed to wake up. I wept, paced, and had to force myself to climb out of bed and to eat. At times, anger overwhelmed me.

And then I hit resigned.

Resigned was worse than numbness; worse than a pillow wet with tears. It was the acceptance that this was just the way it was and there was nothing I could do to change it. It was realizing that we wouldn’t have a baby on or near Ted’s birthday, and that when Christmas came, there wouldn’t be four smiling kids on our card. It was a place where the comfort of weeping came to me less often.

But in the early weeks, the scariest moments were the ones where I felt better. Because in those moments when the sadness wasn’t so bad, I felt disloyal to Noah. 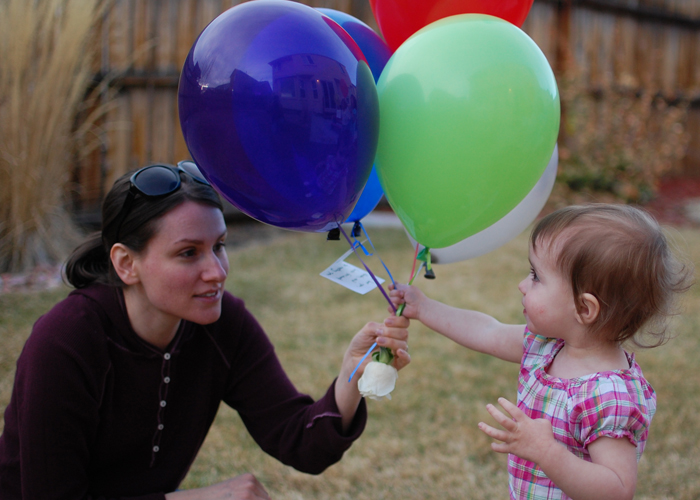 I’m not alone in struggling with feelings of disloyalty. My friend Amy, who lost a baby several years ago, told me, “I know just what you mean about feeling disloyal. We moved across the country, from Indiana to California, six months after my miscarriage. I felt very disloyal, as though I were leaving my child there. When I became pregnant again after losing the baby, I felt disloyal to be excited.”

And Angie Smith, whose daughter Audrey died two and a half hours after her birth, writes in her book, I Will Carry You: The Sacred Dance of Grief and Joy:

The process of healing has been winding and unpredictable to me. One day I’m starting to feel like myself again, and even that can make me feel guilty sometimes. I don’t feel like I have a right to be normal.”

The truth is, there is no such thing as “normal” after the death of a baby. There is, as my friend Jennifer — whose sister and preborn nephew died in a car accident six years ago — points out, a “new normal.” She shared with me:

From my experiences there isn’t really a moving on … but a new “reality,” a new normal…. I think you will gradually “acclimate” to your circumstances but there will be a lingering of what would have been…. You will think of how old Noah would be and what you imagine her to be doing.”

To say the patient is getting over it after an operation for appendicitis is one thing; after he’s had his leg cut off it is quite another. After that operation either the wounded stump heals or the man dies. If it heals, the fierce, continuous pain will stop. Presently, he’ll get back his strength and be able to stump about on his wooden leg. He has “got over it.” But he will probably have recurrent pains in the stump all his life, and perhaps pretty bad ones; and he will always be a one-legged man. There will be hardly any moment when he forgets it. Bathing, dressing, sitting down and getting back up again, even lying in bed, will all be different. His whole way of life will be changed…. At present I am learning to get about on crutches. Perhaps I shall presently be given a wooden leg. But I shall never be a biped again.”

I’ve come to understand that this miscarriage is not something I’ll “get over.” Noah’s short life and untimely death are ingrained into who I am. It’s something, as Lewis points to, with which I have to learn to live.

But as an amputee, as Lewis now labels me, I have a choice on how I will live with it. What will my “new reality” or “new normal” look like? Will I equate a depressed state with loyalty to Noah and her memory? Will I feel guilty in those moments when the sorrow isn’t as strong? Or will I choose to honor her life with what some have labeled “bright sadness”?

Jenny Schroedel, in her article “Rachel’s Tears,” describes this term bright sadness as “a kind of ‘bitter joy’ or ‘joyful mourning.'” To the logical mind, this figure of speech is an oxymoron. Pairing the contradicting emotions of “sorrow” and “joy” together simply doesn’t make sense to the rational. But as I and many others who have walked through grief have learned, these two antonyms can and do co-exist. The joy doesn’t negate the sadness; rather it mingles with it. The two dance, as Angie Smith writes.

For me, bright sadness has come after slowly and painfully wading through the raw emotions of grief. I simply had to walk through this anguish first. And the truth is, when the pinlight of joy began to shine into my sorrow, I didn’t know what to do with it, except accept it as a gift from God.

As I’ve started to make sense of and embrace this “joyful mourning,” I’m seeing that I can honor Noah through it. And it’s this realization that I took with me on my second visit to her grave. 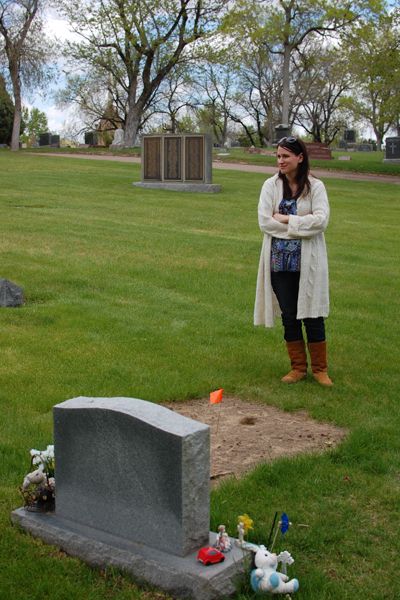 Many babies who die through miscarriage aren’t given a physical resting place on earth. We were fortunate that the hospital I had my D&C at holds firmly to the sanctity of life. As a result, we were given options on what would happen to Noah’s body after the procedure. We chose to have her tiny frame buried in a community memorial alongside other preborn babies who have died. This service was offered to us at no charge; a gift from a local Catholic diocese.

Ted and my first visit to the cemetery was marked by deep sorrow, tears, and the longing to lay my body prostrate on the fresh dirt and weep (which, I held myself back from actually doing). I mourned the physical body I’d never get to nurture.

It was a surreal experience. One that left me reluctant to leave. As a mom I’d been taught to never leave my babies alone. I felt like I was abandoning her, in the ground, unprotected and left to the elements. It went against everything my mother’s heart felt was right. Ted had to remind me, “She’s not really there, Ashleigh. She’s not there. It’s OK to leave.”

I determined this second visit would be different. My tears of sorrow would intermingle with exclamations of praise to the One who promises that, though memory of Noah may fade for many, He will never forget.

As the sun emerged and the grayness of the day lifted, we approached the grave marker. There, Ted read Psalm 34. We both cried as he spoke aloud the words in verse 8, “Oh, taste and see that the LORD is good! Blessed is the man who takes refuge in him!” Through my tears, I whispered, “Yes, Lord, You are good.”

There was a peacefulness to the memorial gardens that day. Not only externally in the beauty of the trees and spring beginning to make its appearance, but also internally within my heart.

Yes, I was sad. I mourned the baby I would never hold in my arms. But this bright sadness that accompanied me brought with it a hopeful reminder: Noah is not lost. She isn’t abandoned to the cold ground of a cemetery. Her spirit is alive and well in the presence of a strong, tender, compassionate Savior. While my arms may not hold her, His do.

We named her Noah, our child who ushered me into this season of bright sadness. I will never forget her.

If you are currently grieving the loss of a preborn baby, or know someone who is, here are a few others articles I wrote about our experience.

Also, look for my new book, Braving Sorrow Together: The Transformative Power of Faith and Community When Life is Hard, coming October 2017 from Moody Publishers.