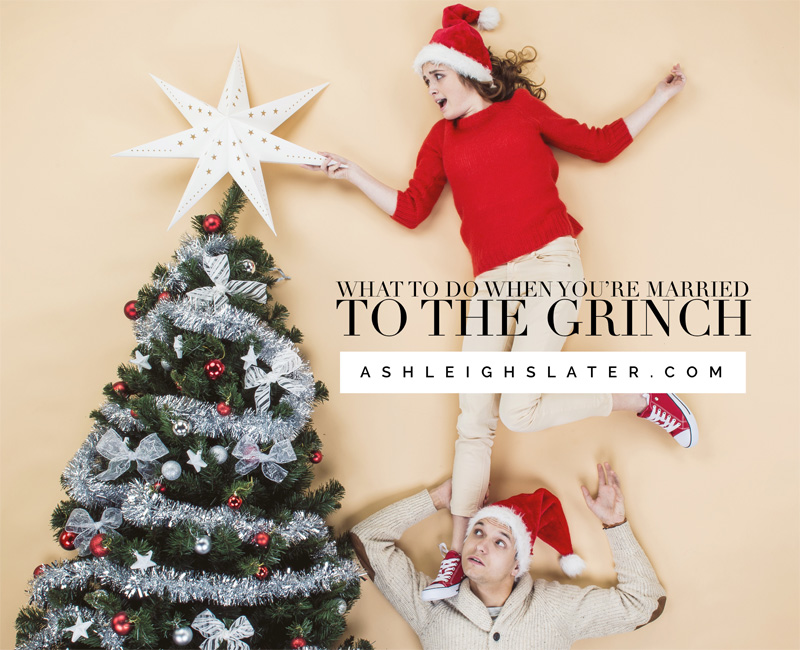 In your marriage, does one of you find more excitement in the holiday season than the other? If so, here are two ways I’ve learned to navigate being married to a Grinch.

Every year in December, there are moments when I feel like my husband Ted is a regular Grinch compared to my Buddy the Elf.

Take, for example, the much-anticipated Christmas tree trimming. Without fail, for most of our married years, Ted has consistently pulled a Harry Houdini at what’s traditionally a group activity. Yep, he mysteriously escapes all involvement.

While I’m busy stringing lights, hanging ornaments, and creating holiday memories, he’s holed up in a milk can somewhere, strategically avoiding all evergreen contact. You’d think he had a synthetic pine needle allergy.

The thing is, when we first got married, I didn’t realize that Ted preferred life on snowy Mount Crumpit to citizenship in Whoville.

Our first holiday season together we were too busy exchanging vows and honeymooning in Paris for me to see that this man to whom I pledged my life and love didn’t share my enthusiasm for the holiday season. Nope, his lackluster attitude for holidays in general wasn’t something we covered in premarital counseling.

Rather, it was something I came to discover with time. Something that, if I’d been more observant during our engagement, perhaps wouldn’t have come as such a shock our first Christmas stateside. After all, he was the guy who intentionally spent his last Thanksgiving as a single man in his condo, by himself, playing video games.

When the Heart of a Grinch Grows One Size Bigger

In the last couple of years, though, a miracle of sorts happened. You could say that Ted’s Grinch-like heart grew at least one size bigger.

It had nothing to do with Whos down in Whoville singing. Instead, it all came down to this holiday event he normally avoids with the skill of, as I mentioned, that famous twentieth-century illusionist.

You see, we traded in our synthetic pine for a real Fraser fir. Not only did Ted go Christmas tree shopping with me, but he set the tree up. Although, I suppose he didn’t have much choice, seeing that my five-foot, two-inch frame can’t handle a nine-foot evergreen on its own. Even so, I dare say he enjoyed both the shopping and the set up.

Does that mean this Grinch of mine is one step closer to my Buddy the Elf? Maybe.

But reality is more likely this: Just because Ted is now involved in our Christmas tree trimming, doesn’t mean his excitement level for the holidays has increased that much. After all, as I noted, his heart grew only one size bigger, not three.

If Your Spouse is a Grinch Too

Maybe you and your spouse are like Ted and me. It could be that one of you finds more excitement in the holiday season than the other. Perhaps you feel frustrated and discouraged that Christmas cheer isn’t something you share in equal measures. If so, here are two ways I’ve learned to navigate our differing attitudes when it comes to the holidays.

1. Force Doesn’t Work with a Grinch

I can’t force Ted to be as excited about Christmas as I am. There’s no amount of bribing or yummy syrup-drenched spaghetti that’s going to get him to feel excitement at the level that I do. He simply doesn’t care as much.

And the thing is, I know better than to use pressure or guilt to coerce Ted. You see, no amount of “pretty, pretty pleases” and extra pouty lips would give me what I want – which is genuine enthusiasm. Rather, they’d most likely have the opposite effect. You know, reluctant participation that does little to raise the cheer barometer in the room, ultimately leaving me further disappointed.

So yeah, after my initial shock early in our marriage, I backed off on trying to force Ted to embrace the holidays with equal excitement.

2. Realistic Expectations Do Work with a Grinch

Before you conclude that I’m fatalistic and have relinquished all hope of ever growing Ted’s heart two sizes bigger, let me share the second, and perhaps more important, thing I’ve discovered.

While I don’t pressure Ted to enjoy Christmas in the same way I do, I haven’t given up entirely. What I have done is become more realistic in my efforts.

Since I realize he isn’t ever going to be gung-ho-ho as I am about celebrating, instead I look for small ways to make shared memories this time of year.

For example, the process of picking out a real Christmas tree as a family. Or, since we both love theater, looking for a holiday production we can see together. When I keep my expectations realistic, yet still hopeful, I’m find myself more appreciative when Ted does experience genuine excitement over a holiday-related activity or event.

When all is said and done, in those moments when I feel like I’m married to the Grinch, I remind myself that apathy isn’t something Ted brings to every area of our marriage. While his excitement for Christmas doesn’t equal mine, there are plenty of other things we can celebrate together with shared enthusiasm.

And I’d say that makes me one fortunate woman, Grinch for a husband and all.