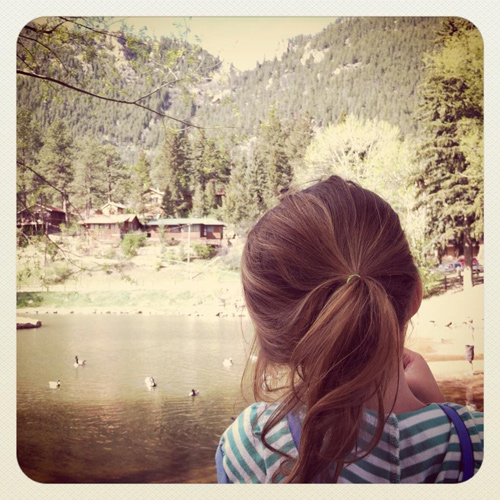 She was angry. There was no doubt about it.

Her words, “You stupid egghead,” made it clear … even if they proved to be an oxymoron. After all, it’s common knowledge that eggheads are smart, right? Well, at least to all of us over the age of five.

I swiftly placed her on our designated “thinking spot” and set the timer. I knew she needed a few minutes to calm down; that her anger had to subside before we could really talk about her words.

Five minutes later, the timer beeped. And there I was, sitting next to her.

She nodded, ever so slightly.

“You were angry at your sister, weren’t you?” I probed.

“Did you act unkind when you were angry?”

I hate to admit it, but I haven’t always been intentional when it comes to helping Savannah process her anger. It’s not that this type of heart-probing conversation is a foreign concept for me. I’ve read the books on it. You know, Tedd Tripp’s Shepherding a Child’s Heart and Ginger Plowman’s Don’t Make Me Count to Three. I even read Plowman’s twice.

So you’d think I’d have this “shepherding a child’s heart” thing down by now. You know, since she is our third kid and all. But I don’t. Our first two never struggled with anger to this degree. It’s thrown a definite curve ball Ted and my direction. Even though she’s only in kindergarten and can’t spell the word “anger,” she feels it intensely. When things don’t go her way. When we tell her “no” instead of “yes.” When one of her sisters doesn’t listen or choose to play with her.

Until recently I’ve often reacted by simply focusing on her behavior; on how the anger is expressed. I’ve poured my energy – and yes, sometimes frustration – into merely punishing words like “you stupid egghead.” But that hasn’t worked so well.

Something had to change. And it has. I’ve started to slow down and offer her more than simply discipline. I’m now taking the time — even if it means we have to interrupt dinner or be 10 minutes late to the next puppet show — to give her hope and practical help. Here are two ways I’m learning to not just discipline, but equip my little girl.

1. Remind her that it’s what she does with her anger that matters

The truth is, Savannah will feel anger. We all do sometimes. At least, I know I do. The problem isn’t that she feels this emotion, it’s how she chooses to express it.

Now in those post “thinking spot” talks, I don’t stop at correction. I don’t just tell her, “When you’re angry, don’t hit and call names. It’s not nice.” I go on to instruct, “Here’s what you can do when you feel really, really upset. First, you can pray. You can say, ‘God, I’m really angry at my sister right now. Please help me not to be mean to her.’ Second, you can run to Papa or me. You can tell us you’re upset and ask us to help you calm down.”

2. Remind her what God made her mouth and hands for

When Savannah gets angry, she tends to hit, scratch, or call her sisters names. Yep, no sugarcoating of my kids’ behavior here. While, sure, I still instruct her not to do these things, I also remind her what God did make her hands and mouth for. He wants her to say kind, encouraging words to others, for example. He wants her to use her hands to offer loving hugs and affirming pats on the back.

The “stupid egghead” incident ended with a hug for me and an apology for her sister. I doubt it’s the last time I’ll have to correct and instruct Savannah when it comes to anger. But now that I’m being more intentional about the process, I have hope that we’re making progress. That with my help and God’s, Savannah can learn how to properly handle this anger.

What about you? What’s one practical way you’re learning to get to the heart of the matter with your kids?