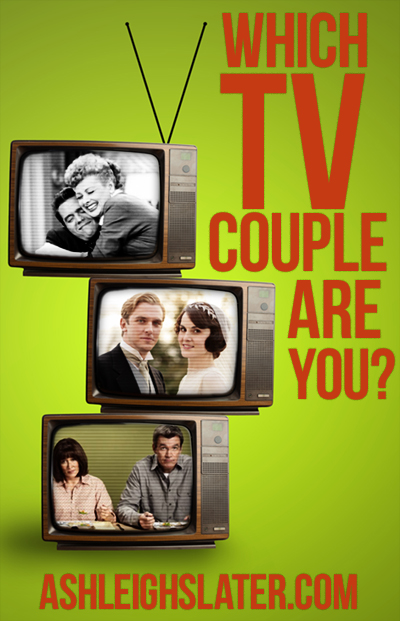 Several months ago, I took an informal poll on Facebook. I asked my friends and family, “Who’s your favorite television couple and why?”

I got lots of great answers.

I don’t know about you, but I think it’s fun to recognize how my husband Ted and I are like certain television characters. While, yes, God has an individual plan for each of our marriages and doesn’t want us to strive to have someone else’s relationship or spend our lives comparing, I strongly believe stories can teach us. And isn’t that what television shows are? A weekly chapter of a book, as it were. Well, unless you’re binge-watching reruns on Netflix and then it’s more like a daily chapter.

So when it comes to teamwork in marriage (ahem, the theme of my book Team Us), I thought it would be fun to look at some small-screen couples and analyze their teamwork. What do they teach us? The good? The bad? While I realize there are a ton of standout television couples, let me list just three and how they rate on the teamwork scale.

The Middle’s Frankie and Mike Heck

The Middle is one of my favorite shows currently on the air. Oh, and already in syndication too. Ted and I even own five seasons on DVD. So how do Frankie and Mike Heck rate when it comes to teamwork?

The truth is, these Indiana natives’ polar opposite personalities often frustrate their efforts at teamwork. While Frankie cares passionately about everything, Mike isn’t riled up too easily. As a result, they find themselves struggling to find an emotional balance in their relationship. Despite their strong personality differences, they have a deep commitment to each other and to making their marriage work. They live by the motto “When the going gets tough, the tough team up!” Frankie and Mike both know the other has their back … no matter what.

I grew up on I Love Lucy. While I had trouble watching Ricky and Lucy for a while after I got married (you can read the full story of that in Team Us), I can now laugh at their antics. I just don’t emulate them in my marriage. In fact, in many ways, they may be an example of what not to do when it comes to teamwork.

You see, when it comes to team effort, this onscreen 1950’s couple has some rehearsing to do. (And note, we’re not talking about their off-screen tragic marriage. That’s a separate issue.) While their love for each other is strong, their individual ambition often gets in the way of their unity. This results in conflict. The positive thing is they’re both quick to forgive and forget. In the end, they are committed to sticking together no matter what zany adventures they find themselves in.

Matthew and Mary may be a couple with whom you’re not as familiar. I’ve found that many of my friends and family don’t know this BBC aristocrat pair who almost never made it to the altar.

How does their teamwork stack up? Well, Matthew and Mary normally have different ways of initially approaching a problem. Which can be a problem in itself. But with some time and work, they’re eventually able to find common ground and compromise. And once they do? They’re each other’s biggest supporters.

When it comes to teamwork in marriage, which of these TV couples are Ted and I most like? Well, sometimes we’re a bit like Matthew and Mary. Most of the time, though, we tend to be a toned down version of Frankie and Mike Heck’s polar personalities. And, just like them, we have each other’s back … no matter what.

How about you? Want to know which of these couples you and your husband are most like? If so, you can take my fun quiz, “What Television Couple Are You and Your Love Most Like?” below. After you do, be sure to come back and share your results with me.

Who knows? You might just discover that you’re one “heck” of a couple too.