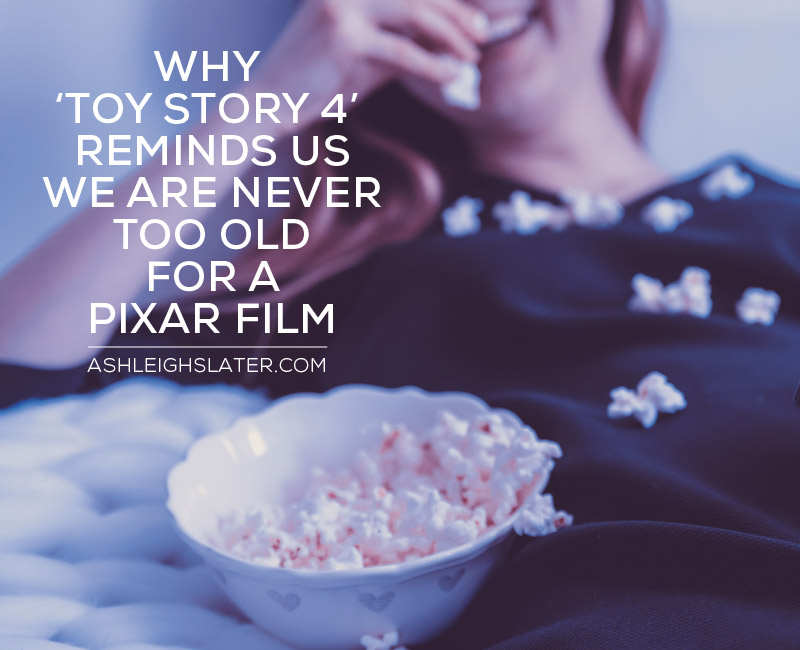 Toy Story 4 is a film about belonging and purpose that’s as much for adults as it is for kids. Maybe even more so.

I was seventeen when the first Toy Story film premiered in 1995. Now, as Toy Story 4 hits theaters in 2019, two of my four daughters are teenagers.

It looks like I’ve come full circle—and I’m not afraid to admit as much. I just hope I’ve aged more like fine cheese than ripe bananas.

As I’ve traveled life’s path from a teen myself to the mom of little ones, then medium ones, and now a couple of bigger ones, I find comfort in knowing that I have yet to grow too old or far along in life for a Pixar film.

If like me, you’re old enough to remember the 1990s too, perhaps you can say the same.

Whether it’s been Finding Nemo, Up, Inside Out, Coco, or The Incredibles 2, these onscreen tales have somehow hit the bulls-eye—so to speak—of what I’m feeling in each of these stages of life. I credit that to the masterful storytelling for which Pixar has become known. Their ability to tell universal stories that appeal to our deepest emotions is what guarantees I laugh and I cry and I offer that nod of understanding. Every. Single. Time.

And, as I sat in a theater last week watching Toy Story 4, I realized it is no exception.

Toy Story 4 is a film about belonging and purpose that’s as much for the mom of a teenager as it is for the kid starting kindergarten. Maybe even more so.

For me, it not only hit on emotions I’m aware of as my kids grow older and more independent, but also ones I was afraid to admit were there. Feelings of becoming unneeded, irrelevant, and—dare I say it—obsolete.

You see, the Woody of Toy Story 4 not only misses Andy in this film, but he also misses how much he meant to Andy. As I realized that Woody grieved this loss of purpose, I also felt the sting of knowing I too cared for kids that would someday go off to make memories I might never see. And, like Woody, I grappled with feeling lost within this loss because so much of my current belonging and purpose relates to my kids.

Now, before you start thinking this film is a downer for all of us aged-cheese adults, let me tell you it’s not.

Instead, Toy Story 4 is a beautifully bittersweet but hopeful reminder that just as you and I are never too old for a Pixar film, we’re also never too old for new adventures. We only become unneeded, irrelevant, and obsolete if we choose to be.

So what meaningful encouragements did I take away from Toy Story 4 that I hope you’ll contemplate too? Here are two … which do include one or two spoilers.

1. You Are More Than Your Responsibilities

As adults—whether we’re parents or not—it’s easy to define ourselves by those things for which we’re responsible. It might be our jobs and the daily tasks assigned to us. Or, if we are a mom or a dad, it could be our children and what they need from us daily.

In this film, Woody has allowed his responsibilities to determine who he is. Without someone or something to care for, he lacks purpose and meaning. We watch as he desperately seeks to remain relevant and needed by caring for Bonnie’s newest toy, Forky. But with time, and a little help from his friends, Woody comes to realize he is more than his responsibilities. As a result, he’s willing to let go and move on as life changes.

So, today, as you work and serve and care for others, remind yourself you are more than what you do. Your value goes beyond to-do lists at the office or making PB&J or grilled cheese sandwiches or driving your kids around.

2. You Have Untapped Potential

Woody believes that his full potential lies in being loved by one child at a time. His role in life was to care for Andy, and now for Bonnie. But, when an old friend, Bo Peep, enters his life again, she helps him realize he has untapped potential as a “lost toy.”

I believe that the same is true of you and me. Sometimes we are so wrapped up in what immediately demands our time and attention, that we lose our ability to see outside of it. And, when we enter a new season—whether it’s a change of vocation or it’s our kids demanding less dependence and more independence—we can feel like we’re becoming obsolete.

But, just like Woody discovers, as life changes, we are given opportunities to discover our untapped potential. Maybe it’s dreams we put on the backburner because of the neediness of our children or it’s newfound interests.

So, today, if you are feeling discouraged as you contemplate the future, remember that you too have untapped potential. Let this push you to be a person who can laugh without fear of the future.

With Toy Story 4, Pixar once again made me laugh and cry and offer that nod of understanding.

I believe it will do the same for you.

After all, no matter what age the calendar says you and I are, we are never too old for a Pixar film.