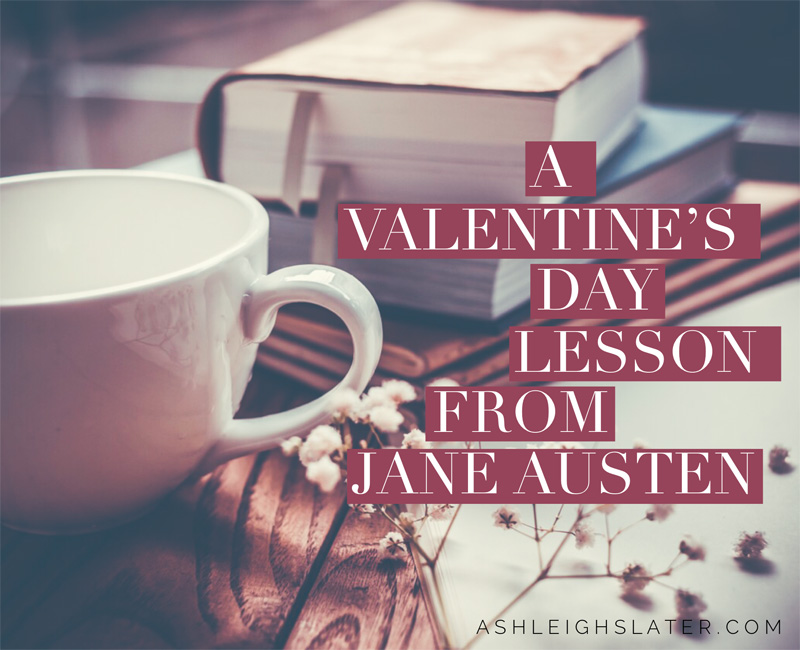 The ordinary days of marriage sometimes leave us believing that our husbands can’t be romantic in the way Jane Austen penned them. One Valentine’s Day taught me otherwise.

I was completely captivated by the beauty of his words. They were tender, heartfelt, poetic. “You must know — surely you must know that it was all for you…. You have bewitched me, body and soul.”

Too bad these words were written by a woman.

I’d gone to see the movie version of Pride and Prejudice with my three sisters. It was a bit strange to sit there, the only married woman of the bunch, and watch as the Bennet sisters sought their potential mates. After all, I no longer wonder how, where, or when I’ll meet my husband.

To borrow a popular phrase: Been there. Done that. And frankly, I’m glad.

Glad that instead of waiting eagerly for “Mr. Right,” I now can marvel at the wisdom of God’s matchmaking, putting together two people who complement and challenge each other.

The ordinary days of marriage sometimes leave us believing that our husbands can’t be romantic in the way Jane Austen penned them.

But being the married one of the bunch also has its drawbacks. I’d lost the ability to believe men could be romantic in the way Jane Austen penned them.

Once the film ended, it took a few minutes for me to pry myself from my seat. I wanted to bask in the glow of Mr. Darcy and Elizabeth’s romance. The romance filled with words I didn’t hear on a daily basis. Words that were much more romantic than, “Are the dishes in the dishwasher clean?” or “Did you get a chance to wash my white t-shirts?”

As we left the theater, I turned to one of my sisters and said, “Real men don’t talk like Mr. Darcy.”

That’s all it took for discontent to set in. I began to examine how the romance between my husband Ted and me had seemingly disappeared.

During our courtship and engagement, Ted had expressed his affection with homemade cards, roses, and words that made my heart flutter. In fact, he verged on poetic.

What to do when you realize real men don’t talk like Jane Austen’s Mr. Darcy.

But once we got married, after two babies in two years, he was too busy putting together swings, heating up bottles, and installing car seats in our newly purchased minivan even to think about romantic gestures. And the cards, roses, and poetic words dried up.

Now my mind began to concoct other reasons for my husband’s lack of romance.

Could it be I’d become boring?

Did he see me only as the mother of his children, not the love of his life?

Perhaps my sweatpants and ponytail weren’t as alluring as I’d thought.

What Mr. Darcy Really Reminds Us

I spent a few days brooding in unhappiness and doubt. Until the clouds parted and I had a revelation.

Mr. Darcy won Elizabeth’s heart not with flowery words, but with actions. He salvaged her family’s name and gave the encouragement that led to her sister’s engagement, and it was the very living out of his love that brought Elizabeth to admit her true feelings for him.

This is exactly how my husband goes about winning my heart day in and day out: with his actions. Maybe he wasn’t so different from Mr. Darcy after all.

I started to pay attention to the evidence of my husband’s love.

It was in a fridge full of Starbuck’s mocha frappuccinos.

In the way, he gave up his daily newspaper reading to watch our girls so I could find time to shower.

In surprising me with a book by my favorite author.

In painting the house so that color fills my day.

It’s in these displays of unselfishness, in the laying down of his wants and desires in order to bless me, that I see his love.

This is exactly how my husband goes about winning my heart day in and day out: with his actions.

Between all of life’s responsibilities, there’s not much time for what society defines as “love” and “romance.” Not a lot of candlelight dinners for two, spur-of-the-moment romantic getaways, and long walks happen when a married couple is busy with life. When you’re parenting little ones, that breathless newlywed excitement fades as diapers, meals, and bath times take over.

Love has met the reality of ordinary days. But it’s through these ordinary days that love is lived out in a much more authentic manner.

The Love Shown in Ordinary Days

This past Valentine’s Day I felt like a young bride again when my husband had a dozen roses and a box of chocolate delivered to my door.

But in all honesty, I’ve come to realize that isn’t where I see his love most clearly.

Instead, it’s his practical, daily displays of service and selflessness that mirror the Mr. Darcy who abandoned his place in society to better Elizabeth’s world.

And in that, my heart is captivated far beyond the power of words.

P.S. I first wrote this article for the magazine Marriage Partnership back in 2008 when I’d only been married for five years. This Valentine’s Day, I thought I’d revisit it and share it here on my blog. You see, at our house, we aren’t into big displays of affection on Valentine’s Day — not that there’s anything wrong with them, there isn’t — but we choose to instead focus on the day-to-day, all-year-long expressions of love.

In fact, the roses you read about near the end of the piece may be the only Valentine’s Day gift I’ve gotten in all our years of marriage. And that’s okay. My goal with this isn’t to downplay the big displays of love, but to encourage us all to more deeply appreciate the little things our spouses do day in and day out.