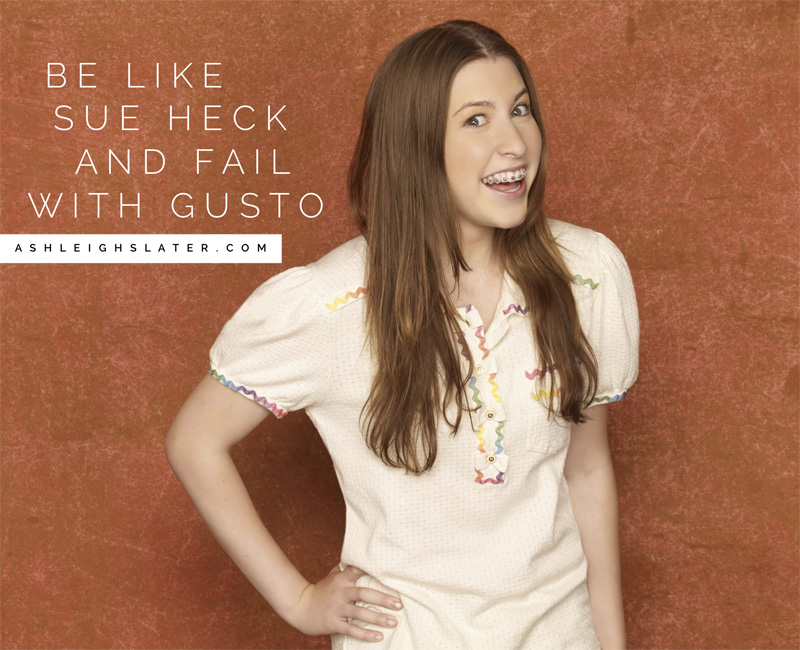 It’s inevitable that each of us will fail at times, but will we choose be a Sue Heck and fail with gusto? Here’s how we can do that.

If I’m going to fail, I want to fail with gusto, just like Sue Heck.

Kid #2 in ABC’s sitcom, The Middle, ninth-grader Sue Heck is the daughter of Mike and Frankie Heck, a middle-income, middle-aged couple raising their three kids — Axl, Sue, and Brick — in Orson, Indiana.

At first glance, Sue Heck has a lot going against her.

For one, on the high school social ladder, her rung is “nerd.” Even her own brother and popular jock, Axl, refuses to be seen with her.

Her nonstop chatter leaves her dad-of-few-words, Mike, uncomfortable, while her over-the-top nonverbal communication gets her dismissed from a community production of The Wizard of Oz.

Oh, and have I mentioned her fashion sense?

In each episode, this middle child attempts to find her niche in the world. She seeks to discover where she fits in and what she’s good at.

Cheerleading. I don’t think so.

Musical theater. Not this year.

I could go on, but I won’t. Let’s just say it turns out that Sue Heck is good at failing.

Yet I admire Sue Heck. Why? Well, when I watch, my take away isn’t that she fails. I ponder how she fails and what I can learn from her example.

Obviously, failing isn’t a goal of mine. I want to do things well, not poorly.

But at the same time, it’s inevitable that I won’t succeed 100% of the time, and that concerns me. Why try if I might fail? Is it worth it?

This is where Sue Heck comes into play.

Casting caution to the wind, Sue Heck does try. And when she does fail, she fails “with gusto.” She approaches every aspect of life with enthusiasm, delight, and fervor regardless of the outcome.

I believe the Apostle Paul would approve of her enthusiasm. In Colossians 3:23, he instructs,”Whatever you do, work heartily, as for the Lord and not for men.” The word heartily — which means “exuberantly” or “vigorously” — is an adverb. As my second grade daughter reminds me, adverbs modify verbs. They answer the question How?

So, when Paul exhorts us to work heartily in whatever we do, he’s instructing us to examine each task we approach and answer the question How? with the word Heartily.

How will I train my kids to get along and not fight?

How will I tackle the challenging work project I’ve been handed?

How will I work through conflict with my husband?

How will I risk failure?

In the first episode of 2012, the Heck family writes New Year’s resolutions for one another. They toss their five names into a pile, each draw one, and anonymously pen a resolution. Sue’s reads: “Stop trying out for things you’ll never make.”

Talk about discouraging. Sue’s own family doesn’t believe in her attempts at self-actualization.

Yet instead of seeing this comment as an excuse to give up, Sue Heck interprets it positively. In a moment of epiphany, she determines this anonymous family member is urging her to make her own opportunities. She exclaims, “I can’t believe I ever looked at this negatively!”

This “dork optimist,” as Axl labels her, starts a cheerleading squad of Wrestlerettes. Maybe not what I’d do, but nonetheless, I can glean from her glass-half-full perspective.

Paul wrote to the Philippian church:

In discouraging situations, Sue Heck chooses to embrace the lovely: She hears a call to opportunity, not to resignation. She determines to see the commendable: She’s pointed toward bigger and better, not mediocrity.

Just like Sue, I can evaluate situations, circumstances, and individuals through a positive lens. I can determine to see the honorable, the lovely, the commendable, and the excellent in daily life and in those around me.

When Sue starts high school, she turns to Axl for advice. Axl’s irritated by Sue’s questions and decides to trick her. He convinces Sue to sign up for a swim class located on the opposite side of the school from her next class. Axl knows Sue won’t be able to make it from one class to the other without being tardy.

What Axl forgets is Sue’s determination.

“Sue Heck does not give up,” she soliloquizes. And she doesn’t.

Through trial and error, Sue finds a route that allows her to make it to class on time. Axl’s response? “You don’t give up. It’s actually almost kind of impressive.”

I agree. Her tenacity is inspiring. Unlike Sue, I too often give up too easily.

“The meatloaf I spent hours on is dry and the bacon I wrapped it in didn’t crisp. I’m never making that again!”

“The discipline we use with our 3-year-old isn’t working. I’m at the end of my rope.”

“This long-distance friend is so slow at responding to my notes. Why bother?”

Paul told the Galatians, “And let us not grow weary of doing good, for in due season we will reap, if we do not give up.” Sue found the perfect route to class because she didn’t grow weary. She didn’t give up. With determination, I can make a better meatloaf, remain consistent in discipline, and show my friend that I love her unconditionally.

English writer G.K. Chesterton once stated, “If a thing is worth doing, it is worth doing badly.” His point was that we may not succeed at everything we attempt, but if something is important enough to us, we will attempt it. Just like Sue.

Yes, Sue Heck is good at failing with gusto. I aspire to fail just as well.