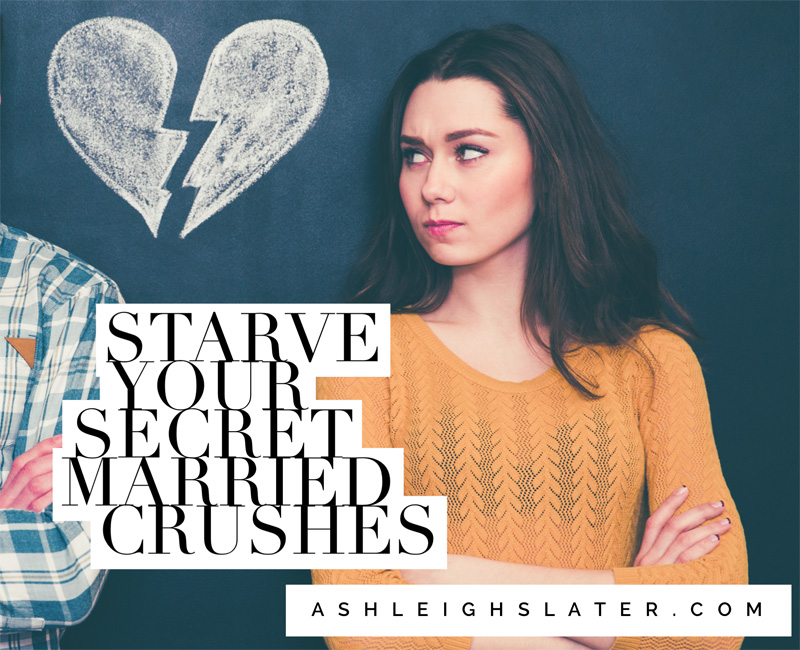 Is it harmless for husbands and wives to have secret married crushes? While some experts say yes, I have a different opinion.

Five years, one month, and twenty-something days ago, I walked down the aisle of a century-old church. There I committed to forsake all others for the man standing beside me at the altar. On that day, I publicly proclaimed not to have any secret married crushes.

As a new bride, I determined that the only man who’d make me weak in my knees was my husband. And, that even on those days when I didn’t swoon in his presence, my heart would still remain steadfastly faithful to him.

Now, after living through the reality of in sickness, in health, for richer, for poorer, for better, for worse, in sadness, and in joy, I still hold to my belief that my romantic affections are to be undivided.

I realize to some this may sound idealistic … and old-fashioned.

I’m not naive enough to assume that as a married woman I can’t be tempted to turn my attention elsewhere. That there won’t be days when the grass seems greener next to someone on the other side of the fence.

But I’m wise enough to know I need to be on guard against actually doing so. I realize entertaining butterflies in my stomach at the sight of a man other than my husband isn’t something I should add to my list of hobbies. After all, many a tragic divorce began with fluttering … bugs.

Not everyone feels this way though.

The Argument for Secret Married Crushes

My convictions may very well be out of date in our feel-good-at-any-cost culture. I was reminded of just how unhip my thinking is while thumbing through the pages of a Fall issue of Parents Magazine. In it was an article titled, “Secret Mommy Crushes.”

Writer Reshma Memon Yaqub argues that not only is it considered perfectly normal for a married woman such as myself to develop a secret crush, but experts actually believe indulging these fantasies can be beneficial to marriages. The article states:

An innocent crush can actually enhance your marriage, says Dr. McCarthy [a sex therapist and the author of Getting It Right the First Time: Creating a Healthy Marriage]…. “The healthiest kind of infatuation is one in which you use the idea of the guy you have a crush on as a way to bring more passion to your relationship.”

Yaqub goes on to affirm the harmlessness of crushes, pointing to the payoffs women receive. She writes:

Sure, we’ve become older and wiser, and we’ve settled down with men we love and children we adore. But even the most blissfully partnered woman is susceptible to the occasional schoolgirl crush. And, say moms, these crushes—ones that you certainly never act on—are harmless, providing a harried, tired caregiver with a bit of an ego boost.

The Case Against Secret Married Crushes

I don’t have unrealistic expectations that our popular culture holds marriage in the same esteem I do. Yet, I honestly didn’t expect a parenting magazine to celebrate and even encourage women to harbor and feed secret married crushes. Let alone tell me that “fantasizing about a hunky fireman, mooning over TV’s Dr. McDreamy, or flirting with the guy who pours your coffee may actually make [my] marriage hotter.”

I remember the first time my husband Ted confided in me that he thought Condoleezza Rice was sexy.

It was three months into our marriage and let’s just say, it didn’t go over well. Despite the fact I knew nothing would come of the attraction.

The truth is, I had no desire to share any of his affections with another woman. I didn’t even want her occupying one millimeter of his brain. Unless, it somehow had to do with some government issue that he was fascinated with despite her involvement.

For me, attraction toward any other woman was unacceptable. Case closed.

And as someone who doesn’t believe in double standards, I don’t view secret married crushes as acceptable territory for me either. Even if it’s a so-called innocent way to feed my ego. Even if it does offer a quick escape from trips to the grocery store, sticky fingerprints on my favorite jeans, and dish-worn hands.

It’s not that I don’t understand the desire to feel good as a woman. I understand it perfectly. It’s natural to want to be affirmed. For me, one word of encouragement from Ted goes a long way. Simply telling me, “You look pretty” can make my day.

But just because I don’t hear these words on a daily basis, doesn’t mean I need to look to develop a secret married crush on another man to fill that need. Rather, on days when I’m not feeling appreciated and loved, I have an opportunity to find out where my hope and security ultimately lies.

Is it in my relationship with Ted? Or is it found in Christ?

Because if it isn’t found in Christ, then I’m more likely to buy into the logic of Parents Magazine. I’m more apt to look for a confidence boost through harboring affections for, as the moms in the article confessed to, the guy who works at Starbucks, the Brink’s delivery man, America’s television hero Jack Bauer, or even Anthony on The Wiggles.

The Problem with Secret Married Crushes

When it all comes down to it, the problem with this article isn’t that as women we want to know we’re valued and that we’re something other than wives and mothers. Nor is it the fact that we may be tempted in this area. Temptation will come.

As Jenny Schroedel says in her article, “Caught in a Crush“:

If we can recognize that our weaknesses are simply part of the larger package of being human, we might be better able to cope with them. Sometimes when we have unsaintly thoughts, we’re tempted to berate ourselves, to say things like, “How can I possibly be having such a thought. I’m a horrible, wicked, person— more worm than human, in fact!” These thoughts don’t liberate. The don’t heal. They stink. They keep us in a small, stuck place, because they’re not about God, they’re about us.

So while we do need to flee the temptation to have secret married crushes on men other than our husbands, we don’t need to beat ourselves up over it. Instead, we need to realize the true problem with articles such as this is the message of where we’re being told it’s acceptable to find this affirmation.

Looking for affirmation in a fantasy, rather than working to make my marriage better without it, is entirely self-serving. And excusing it because it somehow impassions a marriage is not something I should be quick to justify, no matter how many experts may support it.

After all, marriage isn’t simply about me and what I get out of it.

Why Not to Entertain Secret Married Crushes

While marriage can be incredibly fulfilling, God didn’t create it to simply make me feel good about myself.

He designed it to be an earthly reflection of the relationship between Christ and His bride. A chaste relationship that’s intended to illustrate sacrifice and unconditional love. A place where two people become willing to put the other’s needs above their own.

Which means, as a wife who seeks to glorify God through my marriage, secret married crushes aren’t something I should entertain.

My family’s been battling sniffles and coughs this past week. Nothing like a touch of sickness to bring to mind that old maxim, “Feed a cold, starve a fever.”

It’s a maxim I believe, with a little tweaking, can also be applied to secret married crushes.

The next time I’m tempted to start fantasying about a man I’m not married to, I’ll be sure to remind myself to “feed marriage, starve secret married crushes.”