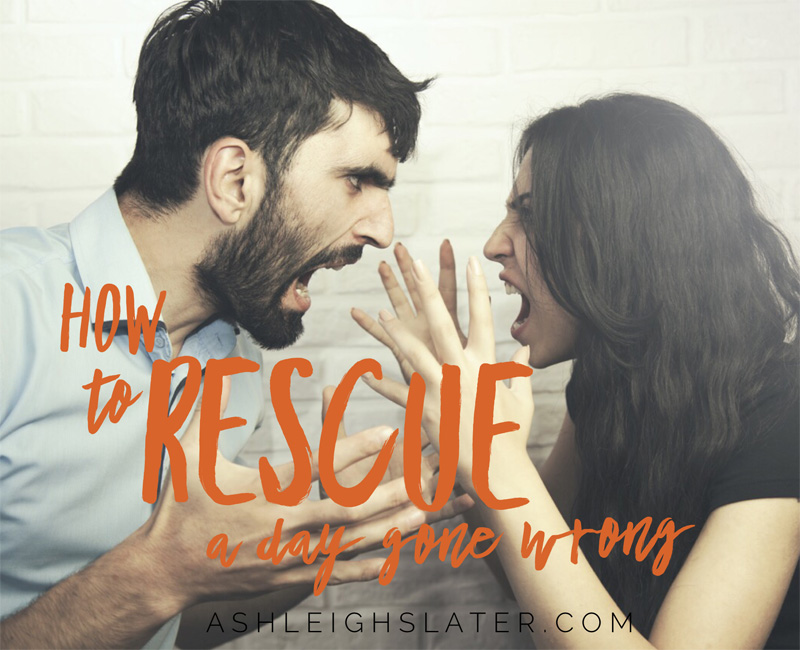 I was fairly certain that Ted, my husband of a mere 56 days, had just called me fat.

Okay, maybe not in so many words. But rather than soothe the insecurity I’d expressed to him about the 10 pounds I’d gained since our wedding, he did the unthinkable. He dared to travel the road most seasoned husbands know better than to even set foot on.

“Well, maybe you need to change your diet.”

And to make matters worse, he uttered this suggestion on Valentine’s Day. A day I’d hoped would be a sweet one, ended up being a very sour one indeed.

Yep, our first V-Day as husband and wife is recorded in our marital history book as our worst. By far.

Looking back, though, I see that Ted’s proverbial foot in the mouth didn’t have to spoil that particular February 14th. A fight didn’t need to follow. If I had chosen to react differently to Ted’s words, we could have rescued that day gone wrong.

My reactions aren’t just important on Valentine’s Day, though. How I respond to Ted’s words and actions on any day — whether it’s an anniversary, a birthday, or a normal, average weekday morning — makes a difference in the day-to-day of our relationship.

Our reactions make a difference in the day-to-day of our relationships.

I’d guess it’s the same for you in your marriage. And not just for wives like me, but for husbands like Ted, too. Because let’s face it, men aren’t the only ones who choose their words poorly at times. We women are equally guilty.

So how could I have rescued that day from going wrong? Here are two things I now do differently to rescue — and even prevent — a day gone wrong.

Take his comment about my diet. His subtext wasn’t, “Yeah, you sure are fat,” even though that’s what I heard. The truth was that, as an eager new husband, Ted wanted to see me happy. My extra poundage was making me unhappy. In his mind, my complaint translated to, “Please fix the problem.”

Often the things we’re offended by aren’t meant as offensive.

If I’d stopped to consider that my Mr. Fix-It Man was trying to be helpful, not hurtful, I could have interpreted his words through the proper filter and determined not to be offended.

An offense doesn’t leave room for grace. When I’m operating in hurt and indignation — like I was that day — I don’t give Ted the benefit of the doubt. But imagine if I had.

When it comes to marriage, patience and grace go further than anger ever does.

Our Valentine’s Day could have gone well if I’d reminded myself that he was still new to this husband thing. That, as it is for all of us, learning to be a good spouse is a process of trial and error. Patience and grace, rather anger, would have been a gentler way to help him understand that most of the time I don’t want a quick fix.

Rescue One Day at a Time

Fifteen years later, Ted is now a member in good standing in the Seasoned Husbands Club. Well, for the most part. He at least knows better than to suggest a change in my diet, that is, not without offering to change his too.

And in those moments when he does still choose his words poorly, I’m a whole lot quicker to dismiss offense and embrace grace. Thankfully, he does the same for me in my not-so-great-moments.

As a result, many a day-off-to-a-rough-start has been salvaged over the years. I hope you can say the same. If not, maybe today can be your first of many.

Get More Practical Marriage Advice in Team Us