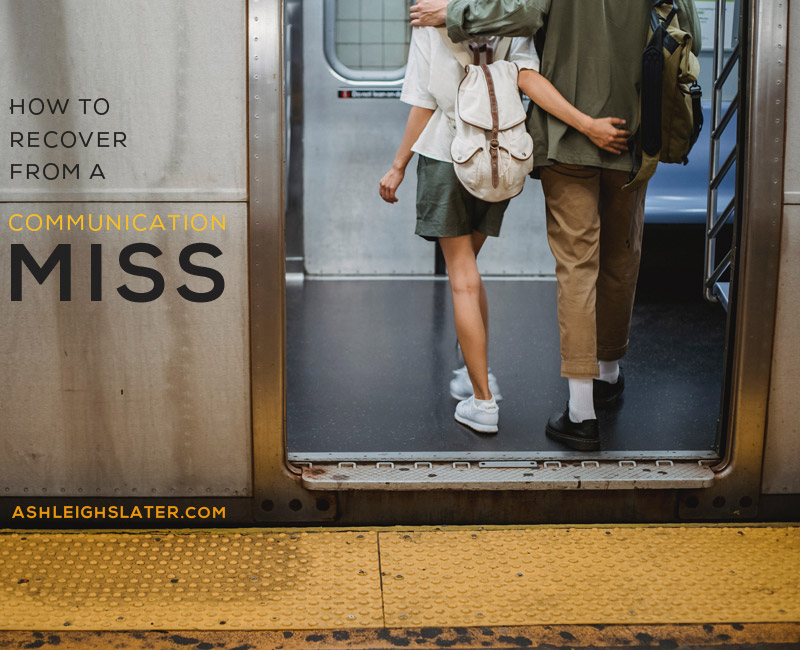 Our words can be misheard, misinterpreted, and misunderstood. Here are three practical ways you to recover from a communication miss in your marriage.

“Is this the local or the express?” my husband Ted asked. We’d just boarded the subway in Manhattan, and his face was etched with urgency and concern.

“It’s the blue A-line,” I responded, unsure what the issue was. The two maps I’d consulted hadn’t noted that there was more than one A train.

“But you do know there’s a difference between the local and the express, right?” This time, his urgency was marked by clear frustration. “If this is the express, it may not include the stop we want.”

This wasn’t the first time in our thirteen years of marriage that we’d ridden public transportation together. As a united team, we’d ventured hand-in-hand on the metro in both Paris and Washington, D.C. This was, however, the first time we’d gotten into an argument while navigating a subway system. It was an argument that would follow us even after we got off at the Madison Square Garden station – one that would result in raised voices, tears, and the desire to walk away.

Here’s the thing, though. This particular conflict could have been avoided if we’d have realized early on what was happening. We had encountered what’s called a “communication miss.”

When Your Communication Misses Its Mark

What exactly is a communication miss?

Say you have a bow and arrow. You aim at the target, but your arrow goes flying past it. Or, even worse, its dejected form ends up defeated on the grass several feet in front of the target. Embarrassing, right? Sure. But also easy to do. It could be that you didn’t test your anchor points, or your posture was poor, or maybe you took your eyes off of the target for just a second.

Now imagine that your words are arrows. The target is your spouse. The objective is that your words and their intended meaning hit the bullseye. You want your spouse not only to hear what you’ve said but also to fully understand exactly what you meant to convey. Unfortunately, this doesn’t always happen. In fact, often it doesn’t. Our words can be misheard, misinterpreted, and misunderstood. When this occurs, we have what’s called a communication miss.

This is what happened to Ted and me that day on the New York City subway. Our communication missed its mark … by a longshot.

I didn’t understand what the issue was, so I felt like Ted was belittling my ability to read a map and was angry at me for no reason. Ted, however, felt like I wasn’t acknowledging the fact that yes, there are express and local trains – a fact I didn’t realize before then. As a result, he felt unheard and dismissed. Neither of us took the time to quickly and immediately ask questions, actively listen, and clarify.

3 Ways to Recover from a Communication Miss

So how can a couple like us or like you and your spouse recover from a communication miss, rather than allowing it to escalate? Here are three suggestions.

1. Recognize a Communication Miss for What It Is

I think most of us if we’re honest, have the natural tendency to assume that communication gone wrong indicates that our spouse is either being difficult or simply didn’t listen to us well. Sure, it’s possible this may be the case at times, but it’s also possible that you experienced a communication miss. Ted and I have found that it’s always better for our relationship if we begin with an assumption that miscommunication has occurred. Unfortunately, this is something we didn’t do that day on the subway.

How can you recognize a miss for what it is?

First, stop and take a moment to evaluate what really happened. Look at the timing and delivery. Think about the situation and surrounding environment. Is it possible that where and when you communicated may have worked against clear understanding? In our case, we were on a crowded and noisy subway train.

Second, ask yourself questions that give your spouse the benefit of the doubt. For example, “Did I say what I wanted to say clearly? Could there have been a misunderstanding? Is it possible that my spouse misinterpreted my meaning and I need to explain?”

One of my favorite communication techniques is called reflecting. It requires that you take the time in a conversation to paraphrase back what you’ve heard. This gives the other person the opportunity to either verify that you’ve correctly understood their meaning or to clarify. When you stop and reflect – when you engage in active listening – it can prevent an already tense conflict from unnecessarily escalating.

Take, for example, that day on the subway. I could have responded to Ted with, “So what I hear you saying is that there’s a local and an express train. I didn’t realize that. How can we find out which one this is?” Or, he could have said, “Am I correct in understanding that the map didn’t specify whether this was a local or express? Is that what you’re saying?”

After Ted and I worked through our communication miss on the subway, it was difficult for me to let it go. Rather than move on and start over, I allowed it to influence how I interacted with him the remainder of the trip. This put a damper on our time there, causing me to not enjoy Central Park, Ellis Island, or the Broadway show Finding Neverland as much as I could have.

This incident reminds me of how important it is to let a conflict go once it’s over. As I wrote about in my book Team Us, if we want to have what I term a “lighthearted marriage” – one characterized by unburdened hearts that aren’t weighed down by grudges – we have to choose to forgive, learn from conflict, and not allow past offenses to affect current and future interactions. I’m not talking about sweeping the mess under the rug, but instead actively forgiving, letting go, and freely moving on. I was slow to do this in New York and our trip suffered because of it.

Getting Back on the Same Team

So did the A-line get us where we needed to go?

It turns out it was an express train, but one that did indeed include our stop. And the good news is, Ted and I can now laugh about riding the New York City subway together. On any future subway rides, we’ll be on the same page, reading the map together. If I can help it, there’ll be no more public transportation communication misses for us!

Get More Practical Marriage Advice in Team Us