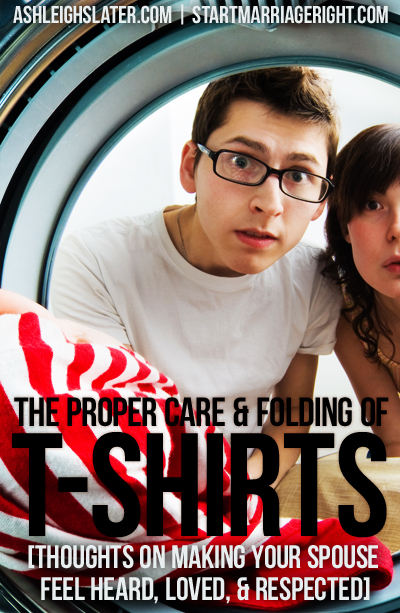 When Ted and I got married, he had a very specific way he liked his T-shirts folded. That would be front side out.

The rationale being that he could easily see from the closet shelf which T-shirt he was grabbing. He didn’t need to unfold them in order to figure out if he’d correctly pulled out the Williamsburg Scottish Festival shirt or if he’d accidentally snatched the Brony one instead. (Okay, so maybe he didn’t have a Brony shirt back then … but now that he’s the dad of four girls, he wears one proudly.)

Honestly, his reasoning made sense to me. It did.

And it was all well and good if he was the one doing the laundry. Which, by the way, he often did. But for me it was an adjustment to change my T-shirt-folding ways.

The truth is, I couldn’t care less how my T-shirts – or any piece of clothing, for that matter – were folded. As long as they didn’t end up wrinkled and require me to go buy an iron that I actually had to use, all was well in my laundry world. As a full-time graduate student who was also holding down a full-time job, I was fairly low-maintenance in the clothes-laundering department.

I still remember when Ted initially informed me of his shirt folding preferences. I’m fairly confident it was mid-fold.

First, I felt like rolling my eyes. But I didn’t. Next, I wanted to toss the shirt to him and say, “Here, you fold it.” I didn’t do that either.

You see, at that point we hadn’t been married very long. Probably less than a month. My desire to please my new husband and be a good new wife overrode any and all eye rolling or laundry tossing desires.

So, yep, you guessed it. Mid-fold, I changed the direction of my fold to front side out. And I’m glad I did.