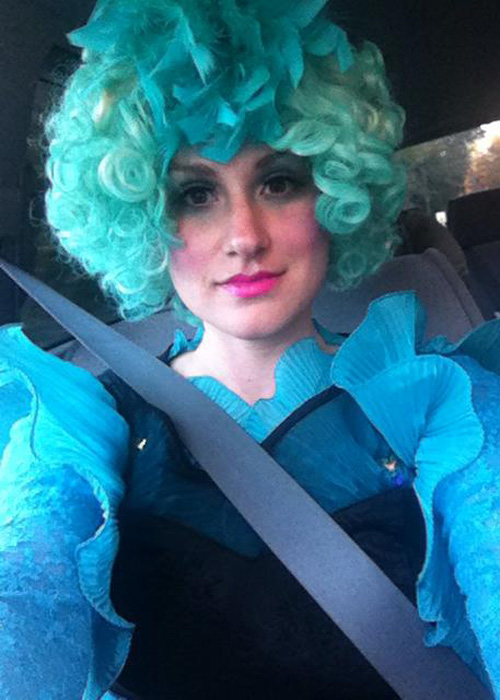 Last night, I rode through Buckhead — or as I like to call it, “the Beverly Hills of Atlanta” — looking like this. It’s not everyday I decide to sport a turquoise wig, false eyelashes, and makeup that’s sure to earn a “circus approved” seal. So why would I decide to do that in one of our area’s most affluent neighborhoods?

It all started when I randomly saw this on Facebook: 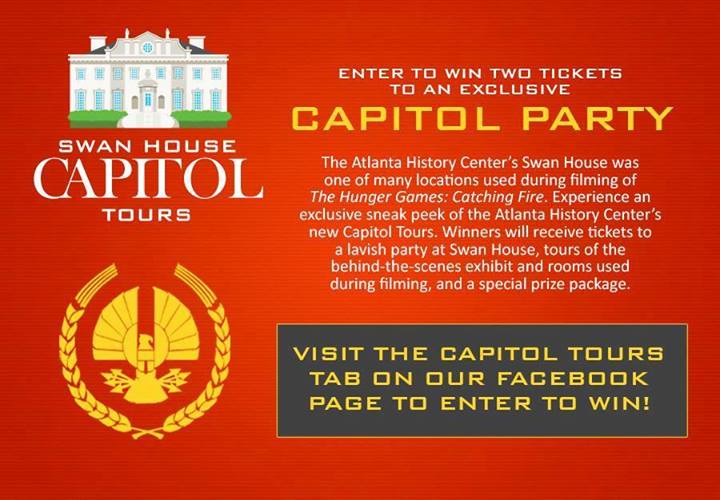 As a member of the Atlanta History Center, a Hunger Games’ enthusiast, and someone who loves film locations, I decided to enter. You see, even though I’d toured the Swan House before and knew it served as the location for President Snow’s mansion in Catching Fire, I’d never been privy to details of the filming. What fun that would be to learn more! As I entered, my thought was: “Someone has to win.”

And then, well … I forgot all about it. That is, until I received an email last Friday saying I had won a set of tickets.

The invitation noted that Capitol attire was recommended, but not mandatory. The word “recommended” was all I needed to hear. Ted and I immediately set to work on our costumes. Research into the “Capital Couture” revealed that we needed to strive for Steampunk meets Oriental. I couldn’t find the perfect dress, so I decided to create my own. I took this turquoise “mermaid” dress from the local Goodwill and this black one from Target … 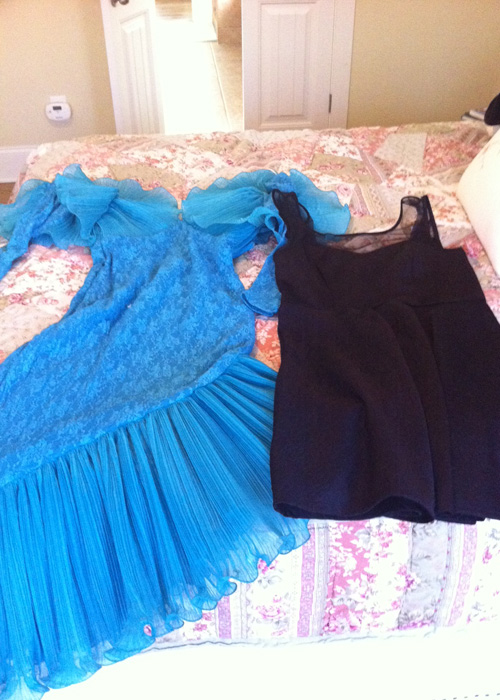 … and combined them to create this. I felt a bit like a “mad seamstress” as I worked to create my Capitol-inspired dress. The lace and sleeves gave it the Steampunk feel, while the floral design on the black dress (which you can’t really see in the pictures) added that Asian flare. 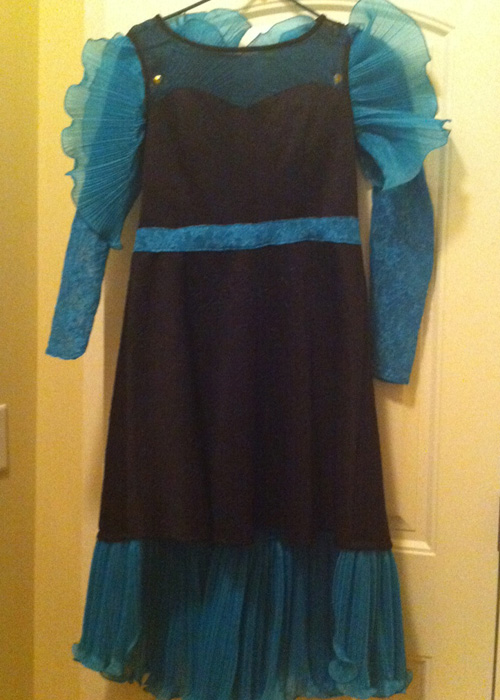 I then combined these two “hair products” with some feather barrettes from Michaels to get the crazy, Effie-inspired “do.” 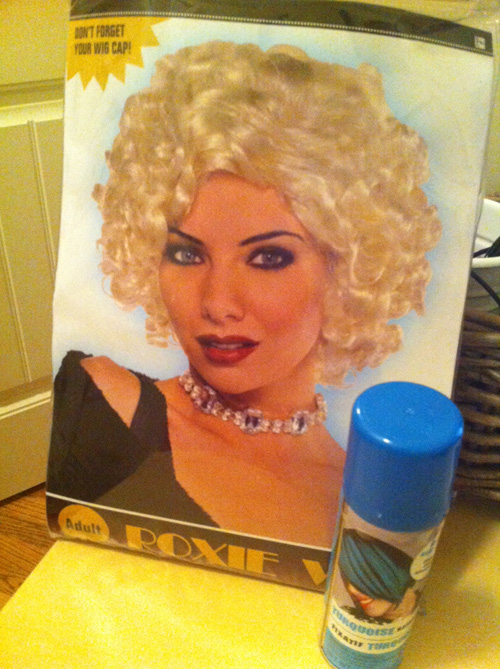 Next, came these great five-inch heeled ankle boots and that make-up job my daughters said qualified me to work at the salon show at Silver Dollar City. Um … 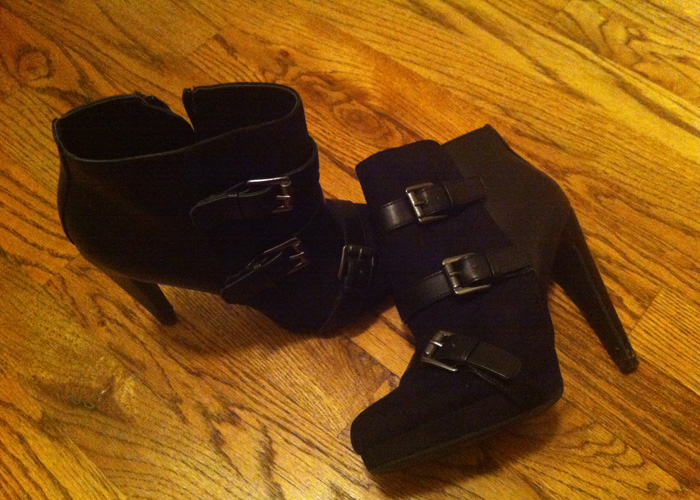 Ted put together a funky gray shirt, black vest, and one of my glittery scarfs. But the best part of his look was the Seneca Crane-inspired beard and his flat top hair. I love that I have a husband who not only agreed to dress up, but was excited about it! In the end, we looked like this: 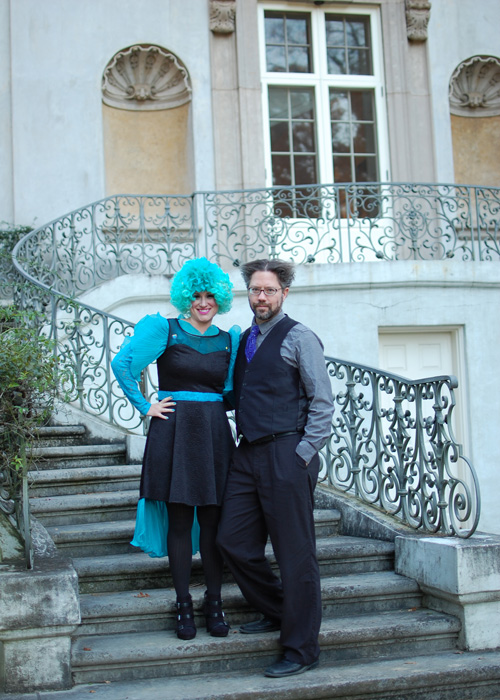 We had a great time! The Atlanta History Center definitely knows how to do an event right. We started with drinks in the Boxwood Garden, followed by hors d’oeuvre in the Boxwood Porch. Both the garden and the porch are featured in the film. Look at this elegant spread! I believe I was about to grab a lamb shank when Ted snapped this picture. 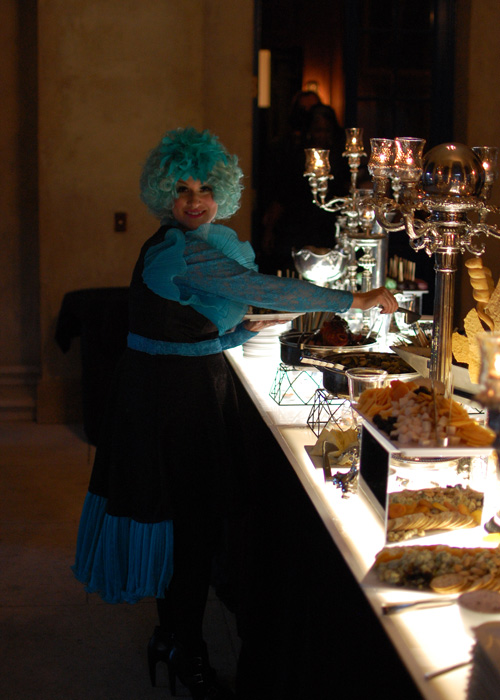 Obviously the table settings at President Snow’s mansion wouldn’t be complete without some white roses. 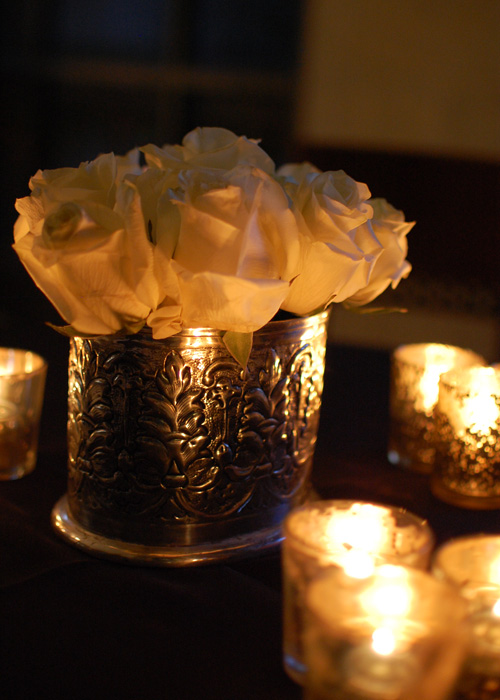 Here we are after enjoying the delicious food! 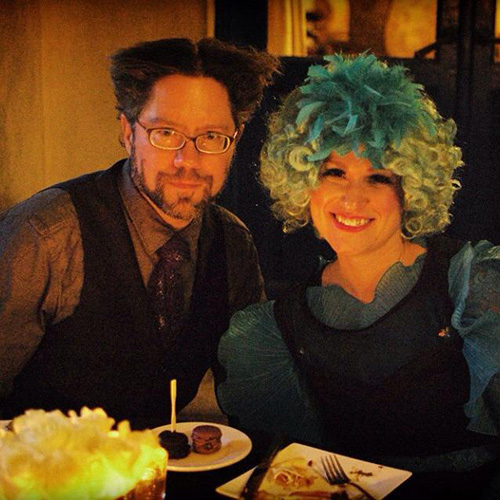 After dinner, we were taken on the Capitol Tour — which doesn’t officially start until next week. We saw three of the rooms used during filming — the library, the morning room, and the dining room. I’d seen them before, but this time it was different because were able to actually take pictures inside the Swan House for the first time. Not only that, but we were able to walk into the dining room — which is normally roped off — and sit in a chair at President Snow’s table. Here’s Ted doing just that! 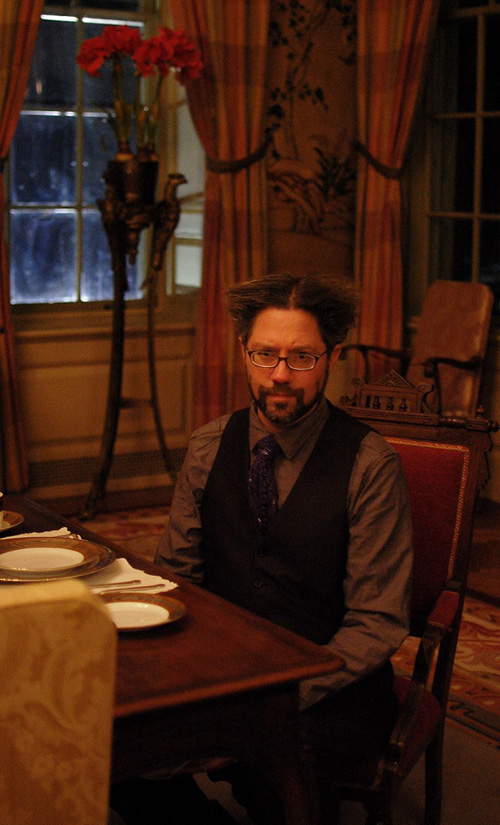 Upstairs, the staff also recreated President Snow’s office (which was originally filmed in the morning room, I believe). It’s a photo opt spot on the tour. Here’s Ted with some of the models hired to pose as Capitol citizens. 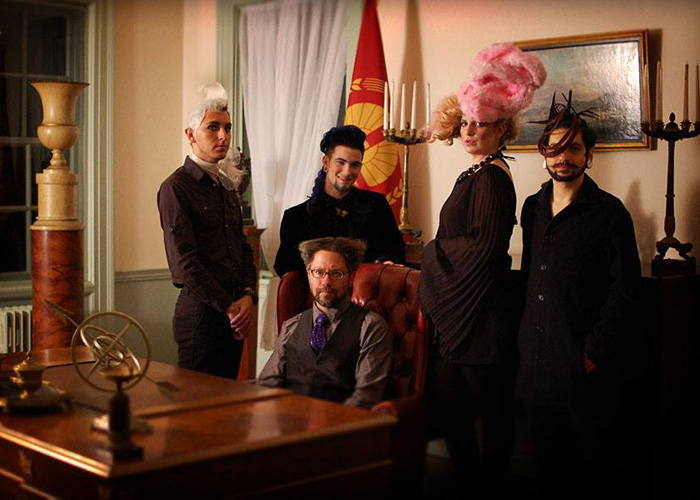 As you can see, we fit right in. 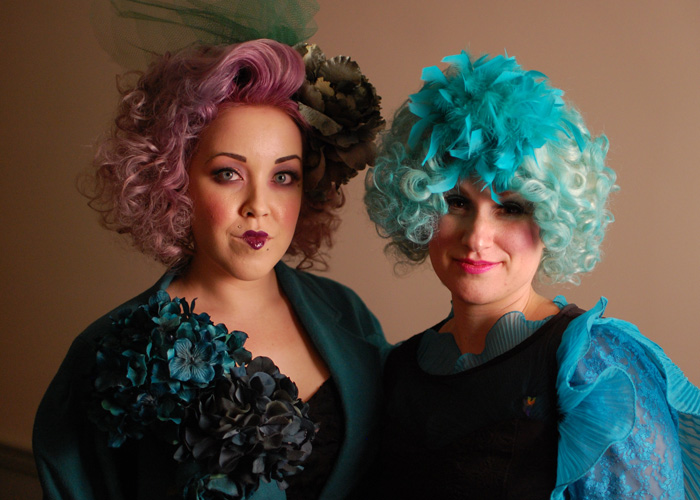 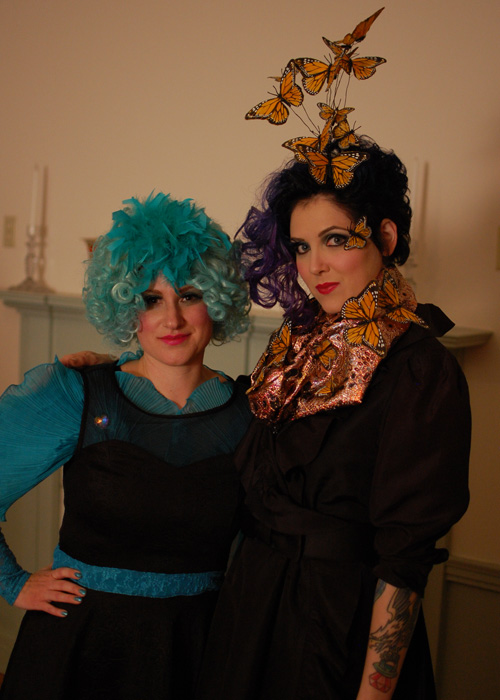 We also ended up having other guests ask to either take our picture or to take their pictures with us — the effort we put into our costumes resulted in them being a big hit. Here’s a picture I pulled off Twitter from Atlanta Movie Tours! 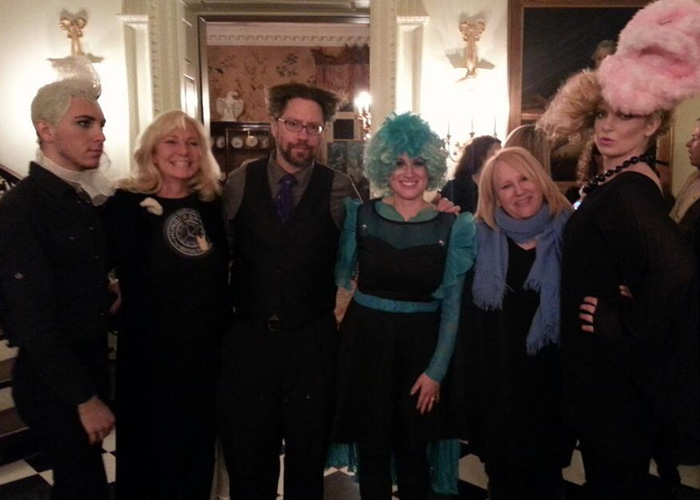 It was such a fun experience. If you live in Atlanta or are ever in the area, I highly recommend you add this historical beauty to your list of must sees. When it comes to its importance to Atlanta and her history, it’s much, much more than just a movie location. But you’ll just have to take a tour of it to find that out for yourself … 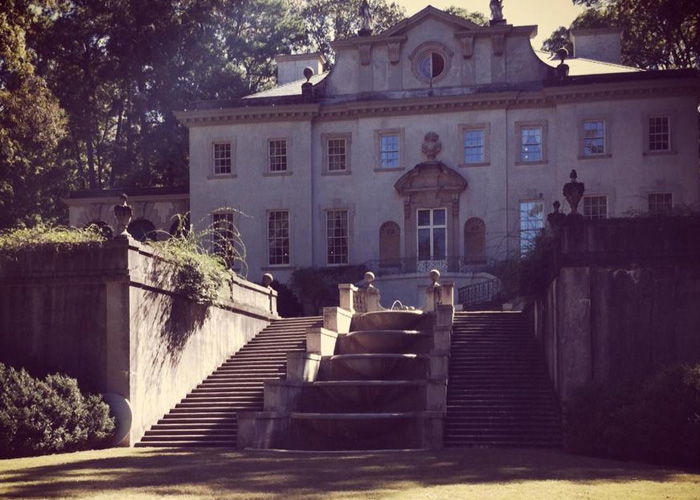