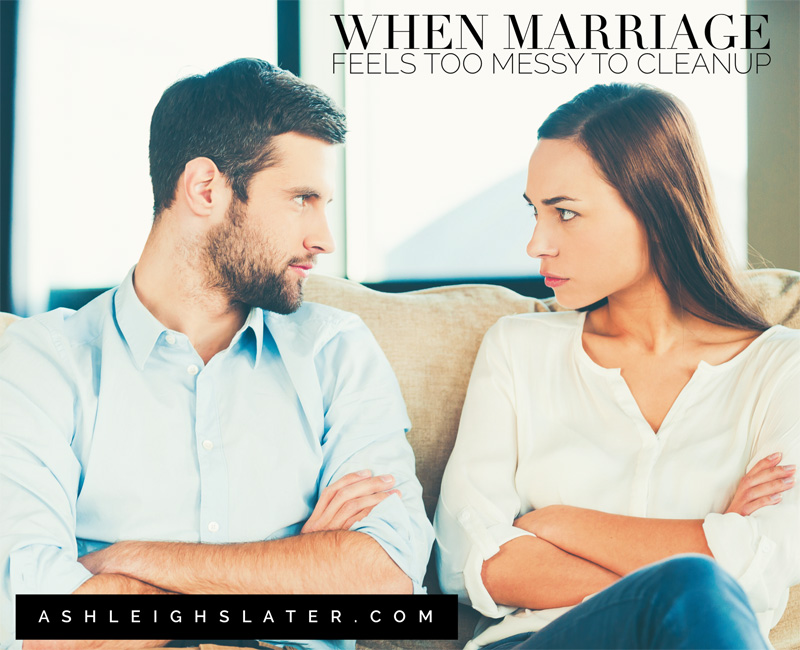 Sometimes marriage can feel too messy for cleanup. But here’s why we shouldn’t give up.

Yearly house decluttering and me, we have a love-hate relationship.

You see, I love that this process spawns a clean, organized, and clutter-free house. Well, as clutter-free as the lived-in home of four kids ages 9 and under can be.

What I don’t so much like is that whatever space I’m tackling always looks worse before it looks better.

Always. And I’m talking without fail.

My current project is our unfinished basement. The one that’s littered with rows of storage bins and cardboard boxes, mounds of clothes our daughters have either outgrown or are waiting to grow into, and a sea of tools, screws, and thingamajigs that my husband Ted emptied all over the floor almost 24 months ago with the intention of organizing. Yeah, you could say it’s a project indefinitely on his to-do list. It’s located right next to the IKEA spice rack turned child’s bookshelf I started to paint about the same time. Another effort still pending.

Sometimes It Gets Messier Before It Gets Cleaner

Why tackle this out-of-sight, out-of-mind location? The one we only venture to when we need a light bulb or stuffed animal gone MIA two moves ago?

Well, long term, we hope to finish it. Short term, we decided it would be nice to have a cozy underground room to retreat to during tornado watches. One with throw rugs and bean bags chairs and old school board games. To accomplish this, though, I have to figure out what to do with all the “treasures” that currently inhabit these living quarters. And, unfortunately, simply stuffing them into a jumbled mess won’t do.

Several weeks ago, I spent three hours in the bowels of our house. Sorting, consolidating, purging. At the end of that 180 minutes, rather than looking tidier, it looked like tornado season had come early. It wasn’t pretty. Or encouraging.

Frankly, it was downright discouraging.

Do you know what I was tempted to do?

One, throw everything back into the boxes, walk up those basement stairs, shut the door, and hope we don’t face any twister warnings anytime soon. Forget the cozy space. Forget the bean bag chairs and board games. We could make cold concrete work for an hour here and there if need be. After all, my kids could do with more “roughing it.”

Or, two, simply get rid of everything. Pack it all up, load the lot into our mini-van, and drive with determination to our local Goodwill. No sorting. No consolidating. Only purging. And unlike Lot’s wife, I wouldn’t look back. Okay, so maybe I would when I realized I thoughtlessly gave away something with sentimental value. Oops.

When Marriage Feels Too Messy to Cleanup

As I’ve reflected on my basement woes, I’ve realized that sometimes marriage can feel like my yearly decluttering.

For Ted and me, it’s happened in those moments when we’ve decided to stop ignoring an issue in our relationship that needed to be addressed. When we’ve determined to sort through and purge things that we’ve tucked away in a box in that metaphorical basement of our marriage.

In the process we’ve discovered that unpacking the junk, emptying it all over the relational floor, and methodically working through it is messy. It makes our relationship look worse before it looks better.

Always. And I’m talking without fail.

But you know what? As messy as it’s gotten and as hard as it’s been at times, we’ve never once regretted devoting our time and energy to marital cleanup.

Maybe your marriage is in need of some decluttering of its own.

Perhaps for you it’s a series of hurtful words whose wounds you’ve left undressed and unhealed.

Or cutting actions you’ve felt the sting of, but never actually talked through with your spouse.

Some seemingly insurmountable foe like pornography that needs to be rooted out, or infidelity you thought you’d forgiven, but you’re having a hard time moving past.

Whatever it is that needs addressing, maybe just the thought of it makes you want to give up. To continue to ignore things, rather than work through them. It could even be that getting out seems like your best course of action. Literally walking away from your relationship and cutting your losses.

God Is Bigger Than Our Marriage Messes

If that’s you, I encourage you not to let the mess deter you. Don’t let it discourage you. Don’t give up and get out. (And please note that I’m not referring to abuse here. That is a different issue for which you should seek outside help.)

Because there’s a truth that trumps all the emotions you may be feeling. All the mess you may be wading through. It’s this…

God is bigger than the mess. Always. And I’m talking without fail.

He is stronger than the sin and the pain that separates you and your spouse. He wants to see your marriage succeed. You are not in this alone.

And, even though it may seem too difficult for you to clean up, I believe He asks the same question of us that He asked of Israel when He spoke through the prophet Jeremiah: “Is there anything too hard for Me?”

The answer is the same now as it was then. No, there’s not.

What should you expect?

Expect things to get messier than they are now.

As you unpack issues tightly tucked away or brushed under the rug, you may find yourself overwhelmed by the clutter. You may feel discouraged. You may even wish you’d never started in the first place.

But know this: Just as a good decluttering of your home is worth it, the same can be said when it comes to our marriages. The reward is a cleaner, more organized, more clutter-free relationship. And that reward’s worth all the hassle.

So, if you are facing the daunting task of cleanup in your marriage, take heart that when things get messier, it’s a sign that you’re probably making progress. Stick with it and trust that God is big enough and strong enough to help you.

[A version of this post first appeared at The Time-Warp Wife.]