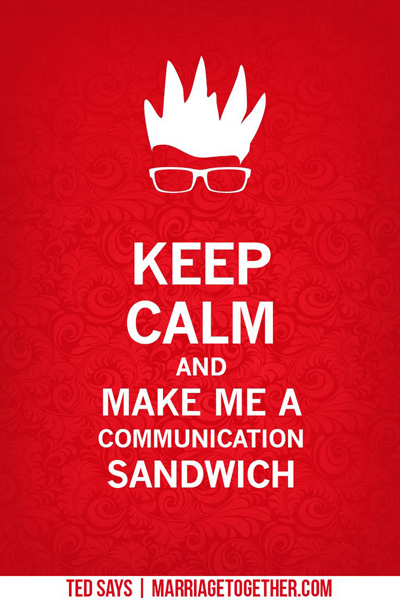 This morning Ted told me to make him a sandwich. A communication sandwich, to be exact.

If you’ve read my new book, Team Us, you already know what that is. If you haven’t, it’s a great communication technique. It simply means that when you have criticism to share with your spouse — or anyone, for that matter — you sandwich it between praise. Much like you’d layer sourdough, ham, sourdough in an actual, mouth-watering sandwich, you layer praise, criticism, praise in this communication one.

You’d think that at this point in our marriage, Ted wouldn’t have to remind me to serve him a sandwich. After all, I’ve written about this technique a number of times. But he did.

For the past two weeks, I’ve been seeing a chiropractor. All thanks to some persistent neck pain I’ve been experiencing. Today I had my fourth appointment. Instead of leaving me to take all four of our girls with me, on my own, while I received an adjustment, Ted offered to come too on his way to work. Without me even having to ask.

The only problem was, Ted has a way of winding up our girls. Which, honestly, isn’t a bad thing necessarily … well, except maybe when you’re supposed to be sitting quietly in a chiropractor’s office.

As we left, I made this comment to Ted: “I had a hard time hearing my chiropractor’s instructions over the girls’ noise. It was distracting.”

We kissed goodbye. Ted walked to his car. Me and the girls to our van. A minute later, I noticed that he wasn’t in his car, driving off, but instead was coming back toward me.

“So what I hear you saying,” came Ted’s words, “is that you’d like me to keep the girls quieter next time?”

“I should have just been direct, huh?” I asked. “It’s hard because I really appreciated you coming to watch the girls, so I didn’t want you to feel like I was criticizing you.”

Ted smiled and responded, “Well, that’s when you make me a sandwich.”

So if you and your spouse are struggling to be direct with one another today, just like me with Ted, I encourage you too to take the time to serve up a sandwich. A communication sandwich, to be exact.