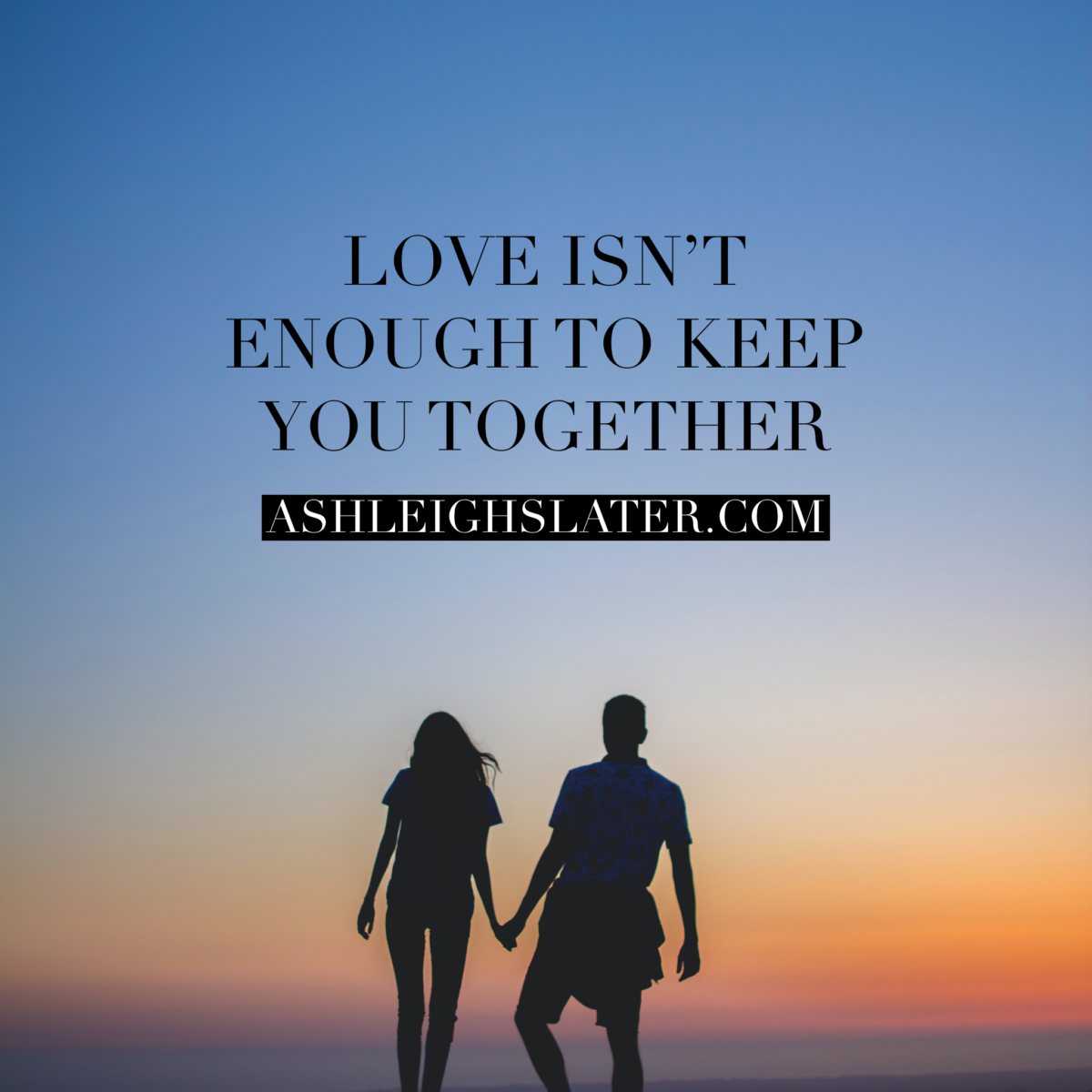 If you want your marriage to go the distance, it requires a lot more than being in love.

In 1975 the musical duo Captain and Tennille recorded the song “Love Will Keep Us Together.”

The song quickly struck a chord with listeners. It spent four weeks at #1 on Billboard’s Hot 100 and went on to become the #1 song that year.

But what does this song from the 1970s have to do with you and your marriage today?

Well, this idea that those feelings of intense romantic love that brought a couple together will keep them together long-term has pervaded our culture. Maybe you’re one of those couples who approached the altar with the expectation that “being in love” is the foundation for a strong, healthy, until-death-do-us-part marriage.

It’s true that these in-love emotions are exhilarating and worth savoring. I know because I’ve felt them too. But as someone who’s now been married almost 20 years — and quite happily, I should note — can I get real with you? And I mean uncomfortably, in-your-business real?

Captain and Tennille, along with a myriad of songs, movies, books, and TV shows you’ve grown up with, are wrong. While these “I’m in love with you” feelings may have brought you together, you need more than feelings to keep you together long-term.

Contrary to the widespread cultural belief that true love never loses its intensity, these euphoric “in love” feelings don’t have the lifespan of the oldest living giant tortoise. Instead, the longevity of these my-partner-is-perfect and life-couldn’t-be-better emotions is closer to that of a mosquitofish. In case you’re wondering, that’s about two years.

According to author and seasoned marriage counselor Dr. Gary Chapman, it’s after this period that “we all descend from the clouds and plant our feet on earth again. Our eyes are open, and we see the warts of the other person.” And, when we do return to earth, we experience what I call “marital culture shock.”

This culture shock happens when, for example, our partner insists we have the car’s oil changed ourselves, or asks that we not touch their shower towel. Or perhaps their work schedule starts to intrude upon our expectation of respectable times to eat dinner.

Worse, we discover they don’t get excited about holidays as we do, and we may have very well married the Grinch — albeit a much more handsome version than the small-hearted, green-furred, mountain-dwelling recluse.

You get the idea. When the daily grind of life takes over, when the annoying habits surface and when hardships happen, our spouse is no longer without blemish in our eyes. We may even have moments when we aren’t sure if we like them, let alone love them.

All of the marital culture shock examples above are real moments Ted and I experienced in our first few years of marriage. Yet in spite of engine oil, shower towels, dinner schedules and holiday enthusiasm or a lack thereof, we have a happy, healthy and love-filled long-term marriage — and, you can too.

Why Obligation Isn’t a Dirty Word

Ted likes to jokingly say it’s his “obligation” to love me. That sounds anything but romantic, right? But, the truth is, it’s actually quite romantic.

Because what he’s really saying is, “In those moments when my feelings aren’t drawing me toward Ashleigh, the covenant I made with her and the commitment I made to her is.”

In our marriage, we’ve had beautiful, happy, very good days, weeks and months. But we’ve also had our share of what a fictional boy named Alexander called “terrible, no good, very bad” ones too. We’ve walked through seasons where our feelings no longer served to bring us together, but attempted to push us apart.

Because of this, we haven’t built the foundation of our marriage on how we feel about each other in any given moment. After all, “the heart is deceitful above all things” (Jeremiah 17:9) and feelings are fickle. Instead, Ted and I determined early on that our mutual commitment would always trump our emotions.

It’s been in those difficult moments that Ted and I have clung tightly to the promise we made for better and for worse. Because ultimately it is the commitment to live out this promise “to have and to hold no matter what” that makes a marriage strong, healthy and enduring.

And here’s what’s interesting: We’ve found that in the rough patches, when we respond with right action even when our feelings aren’t inclined to, it’s often the first step to reconciliation. The funny thing is that eventually our emotions follow where we choose to lead them, and we come out of even the hardest situations with a deeper, more endearing love for one another.

How can you successfully navigate marriage even in those moments when you don’t feel “in love”?

Here are three expectations I encourage you to bring to your relationship. They’ve helped Ted and me, and I think they’ll help you too.

1. You Won’t Break If You Bend

When Ted and I got married, he had a very specific way he liked his T-shirts folded. I still remember when he initially informed me of his shirt-folding preferences. I’m fairly confident it was as I was mid-fold.

His words did little to evoke feelings of love and appreciation toward him. Instead, they made me want to roll my eyes and throw unfolded laundry in his direction. I felt annoyance and indignation.

Yet instead of expressing these negative emotions, I decided to demonstrate my love for him — even though I wasn’t feeling it in the moment — by changing the direction of my fold to accommodate him.

Ted and I have since faced situations that were less trivial and a lot more difficult than T-shirt folding differences. In the last several years, we walked through significant loss and had to learn to accept the individual way each of us grieves, even though we may not have understood it.

In marriage, choosing to love will sometimes require you go against your preferred ways of doing things, whether it’s how a household task is accomplished or how you emotionally react to difficulty.

How can you bend?

Start small. For example, choose to love your spouse when they load the dishwasher differently than you do, or when they respond to a work situation in a way that’s opposite from how you would.

“Is this the local or the express line?” Ted urgently asked me. We’d just boarded the subway in Manhattan, and it had been my job to decipher the map.

“It’s the blue A line,” I responded, unsure what the issue was. The two maps I’d consulted hadn’t noted that there was more than one A train.

“You do know there’s a difference between the local and the express, right?” This time, his urgency was marked by clear frustration. “If this is the express, it may not include the stop we want.”

“Um … I read the maps,” came my flustered reply.

This wasn’t the first time Ted and I had ridden public transportation together, but this was the first time we’d gotten into an argument while navigating it. It was a fight that continued after we got off the train, and it resulted in raised voices, tears and the desire to walk away.

Make it your goal to work through and resolve disagreements together — hand-in-hand rather than back-to-back. You can do this by adopting an “us-first” approach rather than a “me-first” one. This means striving to understand each other’s perspectives, extending grace, and holding loosely your need to be right.

In the weeks that led up to our wedding, Ted excitedly informed our friends, family and anyone who would listen of his impending death. Death, that is, to his single self. He proclaimed this with a smile on his face and a twinkle in his eye. He was genuinely excited and ready to kiss the old life and its habits goodbye — and me hello. (Yep, between proclamations of death and obligations to love, I married me a romantic one.)

What I don’t think Ted anticipated, though, was that the death of old habits takes a while. Just like it takes time to form a habit, letting go of ingrained behaviors isn’t a quick and easy process. It’s not instantaneous; sometimes it takes years.

When those annoying habits don’t change immediately or in the manner we desire, we tend to embrace a “Goldilocks” attitude toward our spouse. No amount of “in love” feelings can squelch our frustration when their change isn’t “just right.”

How can you be patient with those old habits when change is slow in coming?

Take a moment to put the habit in perspective. A helpful way to do this is to think about your own bad habits. Maybe you have one or two (or ten) that bug your spouse. When you realize, Wait, I’ll bet that is annoying, it’s easier to show grace and patience with each other as you both work toward change.

Love+ Will Keep You Together

I’ve got to admit, when I first read the lyrics to “Love Will Keep Us Together,” I didn’t walk away with a lot to chew on; let’s just say there isn’t much depth to its message.

Even so, I didn’t close the browser window on these lyrics empty-handed. You see, reading them brought to mind the words of another song: one that, incidentally, was played at my wedding.

“I will be true to the promise I have made to you and to the One who gave you to me.”

While “being in love” certainly brings us together as couples, it’s this kind of true-to-our-promise love that serves as the best foundation for a strong, healthy, until-death-do-us-part marriage.