This year the International Christian Retail Show (ICRS) just so happened to be in my backyard (a.k.a. Atlanta). Kind of a crazy coincidence, if you ask me. You know, considering it’s also the year — not too mention, exact month — my first book released. So when Moody asked me if I was interested in attending, I didn’t hesitate to say, “Yes!”

I headed down to the World Congress Center on Sunday for two interviews. I was so excited that the first one on my schedule was a video interview with my iBelieve.com editor Kelly. 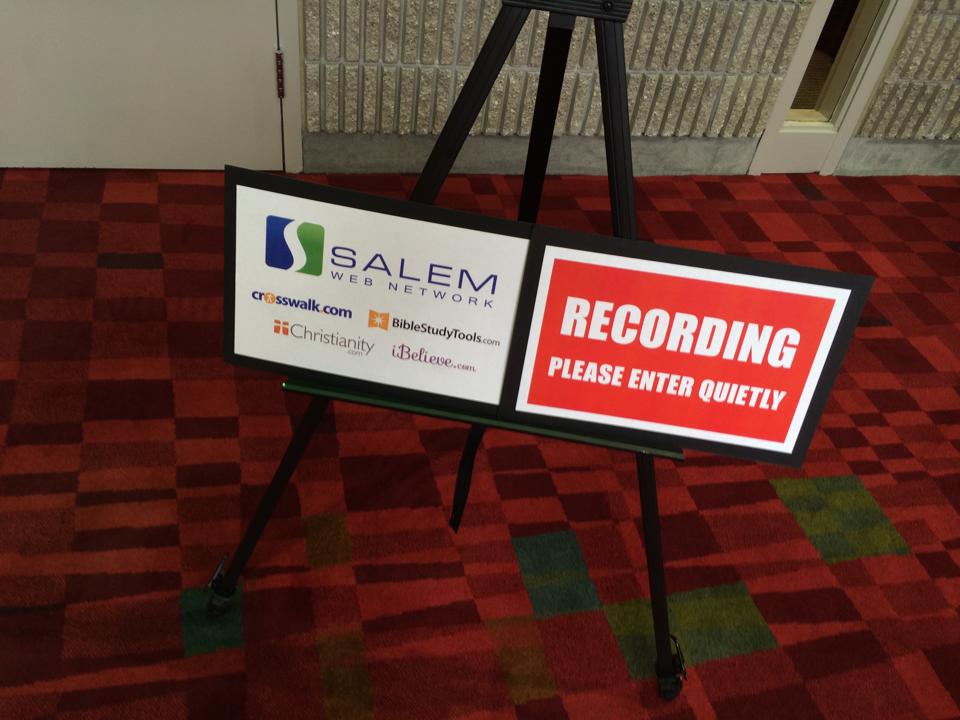 It was such fun to meet her in person and be introduced to the other folks from Salem Web Network. I left the interview feeling like Kelly and I were old friends. How could we not be after discovering that I gave birth to our oldest daughter at the exact same hospital Kelly was born at? Small world! 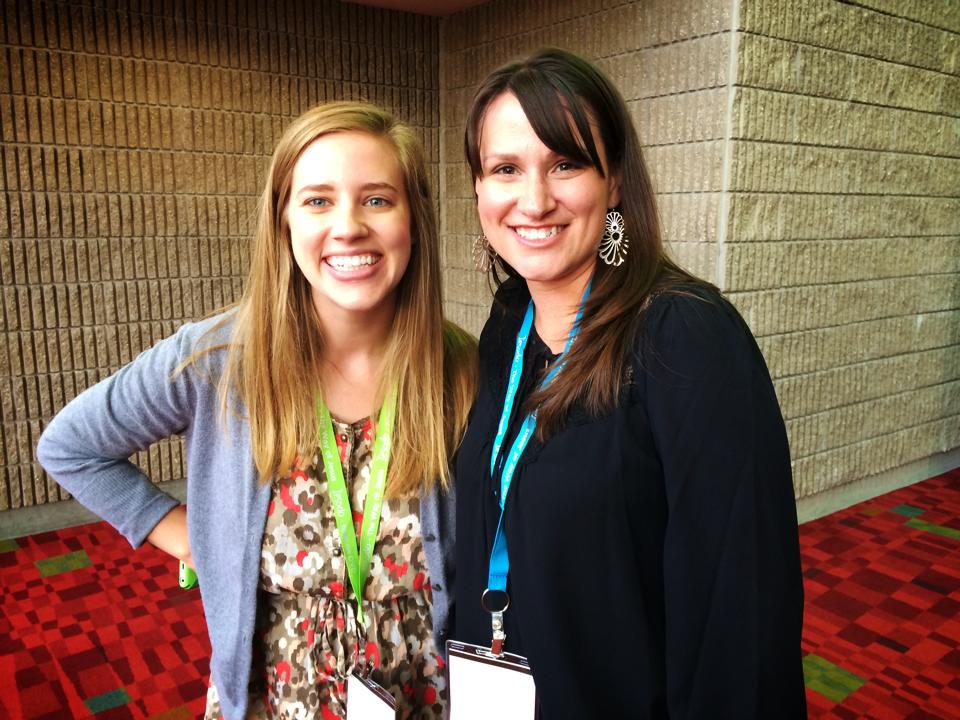 On the way to my second interview with David Yanez for Rev Network (which I forgot to take a picture at), I ran into author Arlene Pellicane. I’ve known Arlene for years. But, while we’ve kept in touch via email and Arlene even endorsed my book, I haven’t seen her since our oldest kids — who are now 10 — were babies. We both had appointments, so we couldn’t talk long, but were able to snap this picture. And yes, those are what I call my “crazy selfie eyes.” I still don’t know where to look when taking a selfie. 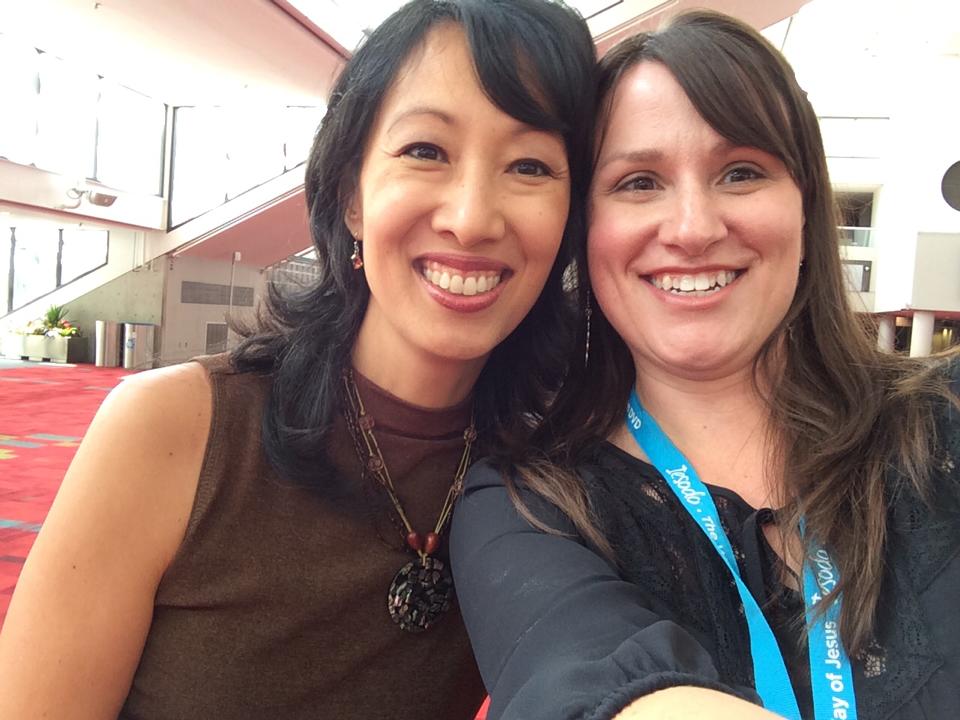 Monday morning I hit the ground running with this handsome guy at my side. 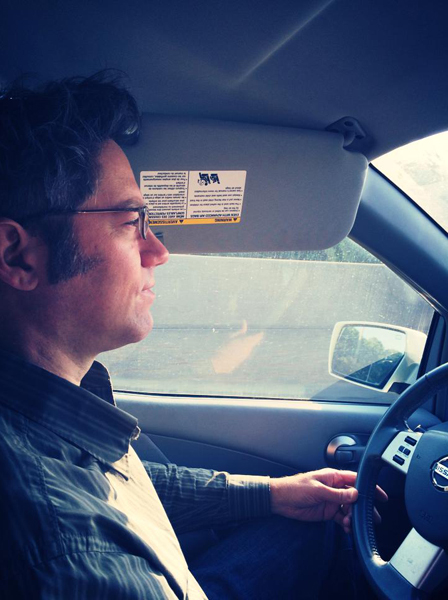 As soon as Ted and I walked the half mile from the parking garage to the exhibit hall, we made our second mistake of the day. The first? Well, it was really just mine and it came down to my shoe choice. The boots I picked where super cute, but by 2 p.m. my feet ached so much I could hardly walk.

Anyway, back to that second mistake. Here’s what happened. We found ourselves standing about six feet away from Phil Robertson and Miss Kay from Duck Dynasty. There they were, just sitting at a booth signing books. And the line wasn’t even long yet. But instead of stopping and meeting them, we hurried off to our appointment — even though we had a few minutes to spare. We later kicked ourselves for not stopping. And kicked. And kicked. And kicked.

We then reached the Moody Booth and met Janis. She’s the in-house publicist I’ve been working with on Team Us. It was so fun to meet her in person. She took wonderful care of us all day long. It was such a pleasure to get to know her better. 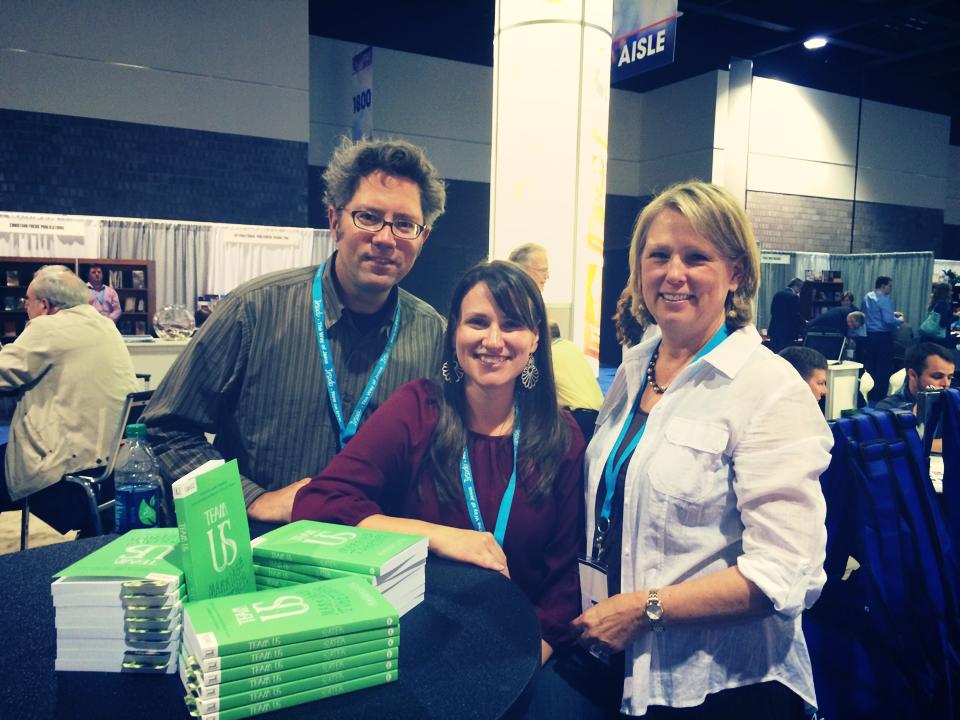 Our first item on the schedule was a book signing at the Send the Light Distribution booth. 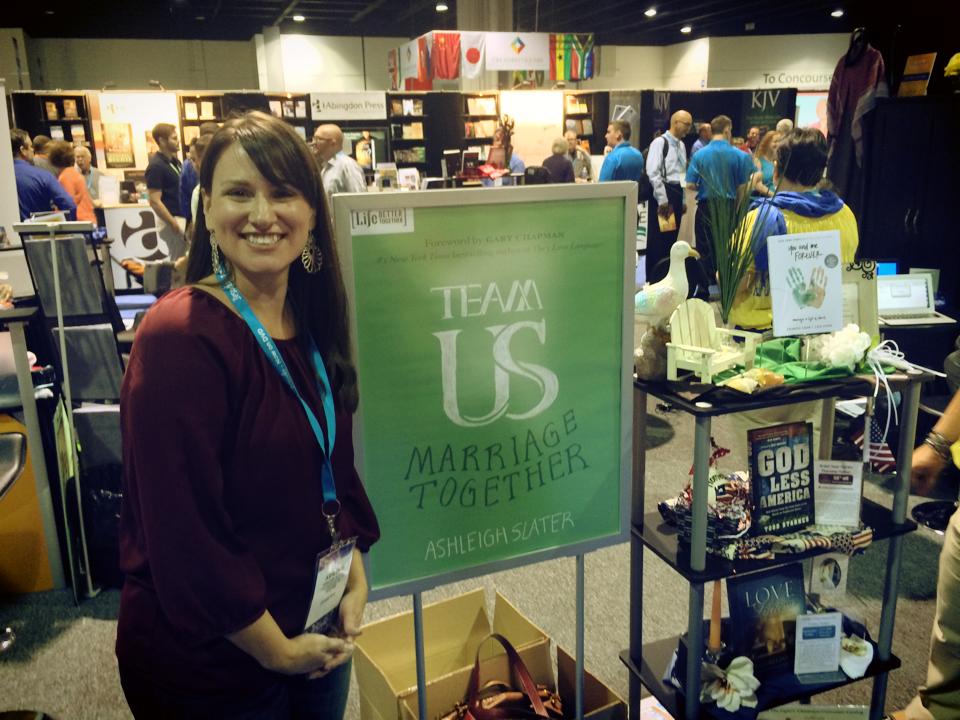 Before arriving, Ted and I had joked that we’d be happy if five people showed up. I mean, I am a new author, after all. But we had such a great turnout! There was actually a line and I ended up signing books and talking to exhibitors and buyers for the entire hour non-stop. I met people from all over the U.S., as well as from England, Norway, and even China. I’m hoping that many of them connect with Team Us and decide to offer it in their bookstores. 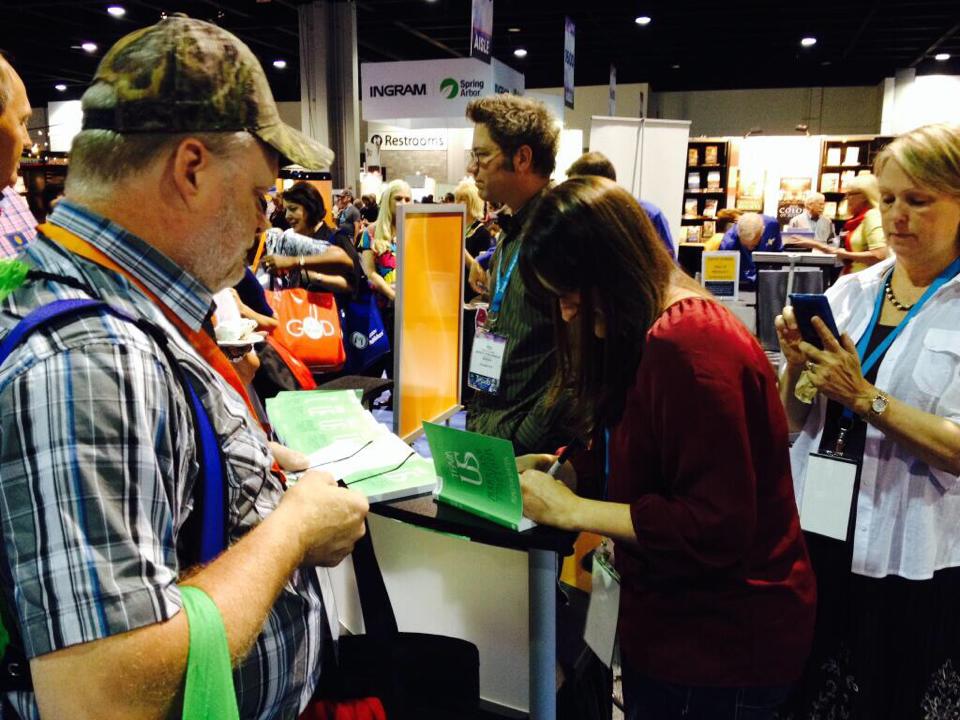 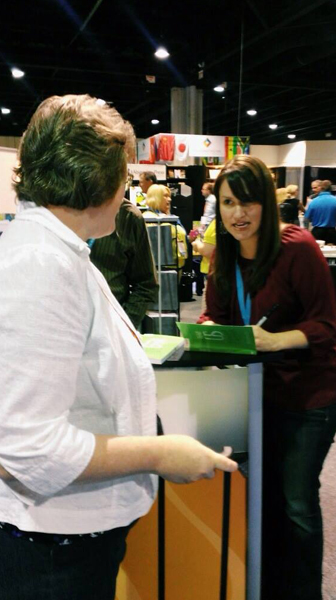 Following the signing, we headed to an interview with Deb Haggerty at the blog Positive Grace. Again, I forgot to snap a picture. She chatted with both Ted and me. She has a great sense of humor and we laughed a lot during the interview.

Next was some good ole’ Georgia BBQ for lunch and then an interview with Pete from New Life FM. It was fun to connect with a local radio station. 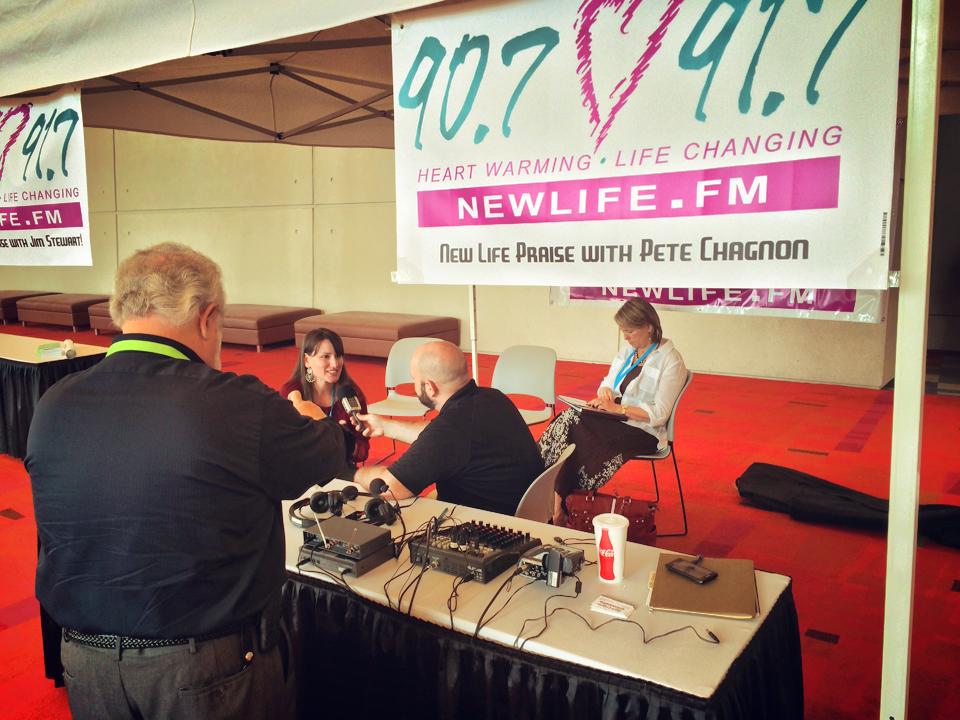 The last item on our schedule was a signing at the Moody booth. It was pretty exciting — and very, very, very surreal — to see my book featured within the booth’s design. Here’s Ted and me standing in front of that part of the booth. The camera was having a hard time with the illuminated product sign, but it’s a fun picture even so. 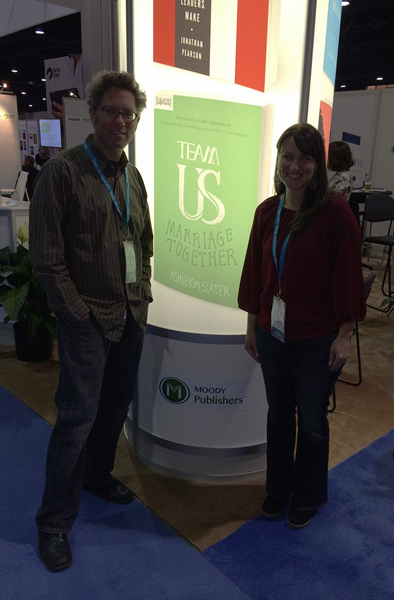 One of my favorite parts of ICRS was meeting some of the folks I’ve been working with at Moody and running into old friends. Ted seemed to see someone he knew — whether from time in Virginia, Colorado, or Chicago — around every corner. Here we are with our friend and fellow writer Rachel. 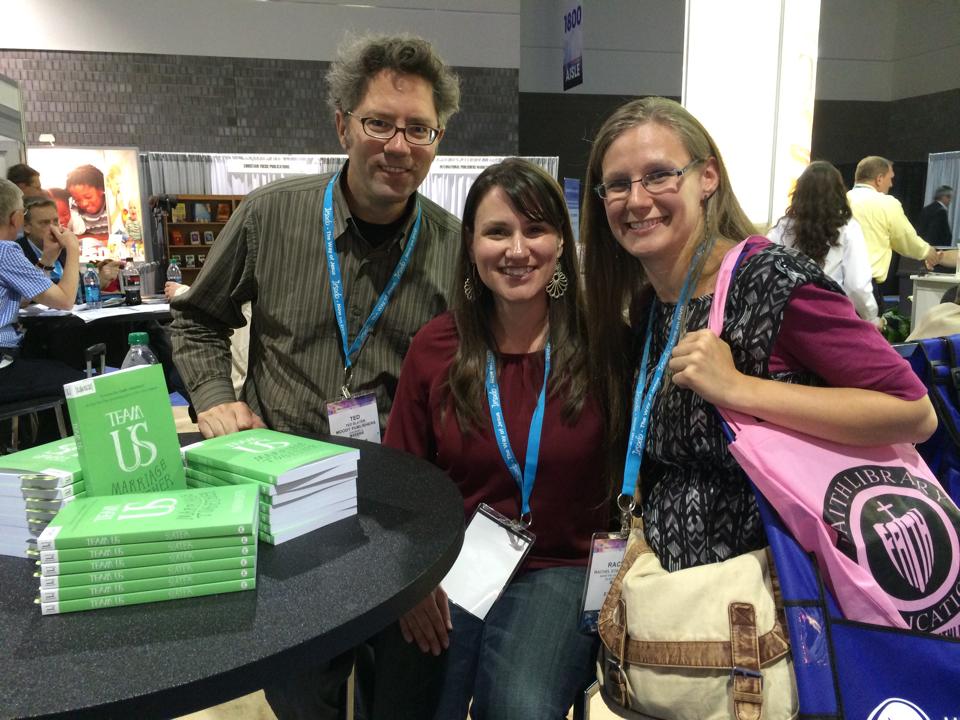 We had a fun, whirlwind-sort-of-adventure at ICRS! It was definitely an experience Ted and I will be talking about for sometime. Thank you again to Moody for asking me to attend!

And BTW, if you’ve read this far, you’ve probably found a typo at some point. My excuse? I’m writing this in a fairly exhausted state. So please excuse any spelling or grammatical errors.