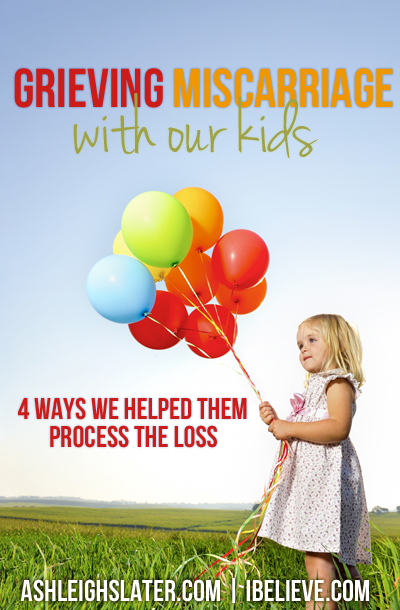 The gel felt cold on my first trimester belly. I was too excited to care, though. We were about to eavesdrop on our fourth child, to listen to his or her tiny heartbeat for the very first time.

As Kathy, my nurse, expertly moved the Doppler across my skin, my ears strained to catch that “galloping horse” sound among the static.

One minute, two. Only static.

“It can be hard to find this early,” Kathy comforted.

The minutes ticked on. My concern grew. My husband Ted and I exchanged glances. And when our OB ushered us into the ultrasound room to “take a look,” I knew something was wrong.

Through it all, our five-year-old daughter Olivia watched.

We left the office that morning devastated to learn that our preborn baby, whom we later named Noah, had died in the womb five weeks earlier. And we found ourselves assigned the task of not only grieving personally, but of walking our three young children through the death of a sibling they’d never met.

Why We Grieved with Our Kids

Not all families approach a miscarriage the same. Many parents decide not to include their children in the grief process, while others do. I have friends and family who’ve approached this difficult season in both ways. I don’t assume to know what’s best in each individual situation or to prescribe one approach as “the right way.”

I think we have a strong inclination as parents to protect our kids from pain. Yet in the process, sometimes we forget that “a person’s a person no matter how small,” as Dr. Seuss reminds us. And these little people have very real feelings. Even though they’re young, they sense that something’s going on. While we obviously need to use discretion as a parent, I’ve noticed that when I don’t bring my children into a process and guide them – in an age-appropriate manner – they can feel lost and unsure. It can be more unsettling for them to realize that something’s wrong, but have me pretend that everything’s okay.

For us, grieving with our kids felt natural. We had included them in the anticipation of this new life early on. When that life ended here on earth, simply glossing over it wasn’t healthy for any of us, especially the kids. They needed a sense of “closure” as much as we did.

Our kids’ ages ranged from 5-years-old to 18-months, so there wasn’t a one-size-fits-all approach to guide them through grief. Here are four things we did:

1. We Named Our Baby

When we chose the name Noah and called our baby by it, this unseen child became more real to our kids. As Jenny Schroedel writes, “To speak a baby’s name is to move the child from the abstract into the concrete … you’re no longer talking about ‘pregnancy loss’ or ‘infant loss,’ but an unrepeatable human being that had already begun to have a relationship with his or her parents and siblings, even in the womb.” This was true for us.