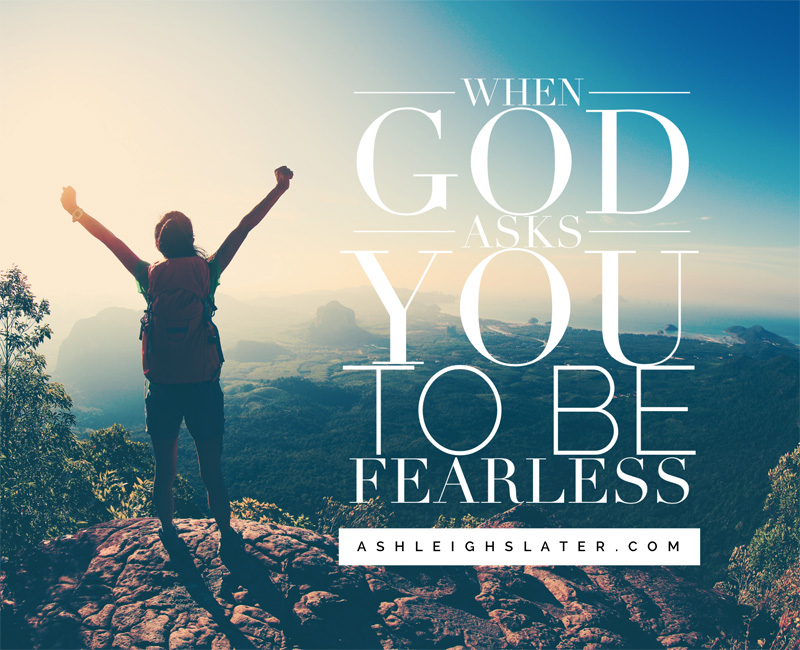 Is there an area of life in which God is asking you to be fearless? If so, I get it. Lately, He’s been asking me to be brave too.

It was dark and the clock read 4 a.m., but I couldn’t sleep.

Perhaps it was the hotel bed. Or maybe all the coffee I’d downed the day before. Whatever the case was, slumber was far from me.

For a while, I fought the awakeness, lying quietly so as not to disturb my two roommates.

But over an hour later, nothing had changed. It was still dark and I still couldn’t sleep. So I gave up. I quietly slipped out of bed, got dressed, and made my way downstairs to the hotel lobby.

My friends and I were staying there for a blogging conference. I knew that a mere left turn, followed by a right, would lead me to a room the conference dubbed “The Lounge.” There I’d find coffee, as well as a cozy spot to curl up and read while I waited for daylight and breakfast to come.

Not long after I settled down with my book, a young woman, probably no older than nineteen or twenty and in a hotel uniform, approached me.

“Is there a place where hotel staff can ask for prayer?”

My first instinct was to send her to the prayer room.

After all, that’s what the “prayer” room was for, right? Plus, I was confident that, unlike me, the women there felt equipped to pray. So that’s exactly what I did.

As she walked away though, I sensed the Lord speaking to my heart. “Ashleigh, you pray for her. You’re right here. She’s right here. It’s no coincidence that she asked you.”

In that moment, ready or not, He was calling me to be fearless. To step out of insecurity and into courage. Even if I didn’t feel equipped or adequate or ready.

The Call to Be Fearless

But this wasn’t an isolated moment for me. Prior to this, God had already been revealing to me that He wanted me to be fearless, to bravely approach life. Fearless in my marriage, fearless in my parenting, fearless in fostering closer community, fearless in every opportunity He gives me.

Obviously, learning to be fearless isn’t anything new. Just google it and it’s clear that many have written on it, including the Apostle Paul. In one of his letters to Timothy, Paul challenged his young friend to be brave. He wrote:

I am reminded of your sincere faith, a faith that dwelt first in your grandmother Lois and your mother Eunice and now, I am sure, dwells in you as well. For this reason I remind you to fan into flame the gift of God, which is in you through the laying on of my hands, for God gave us a spirit not of fear but of power and love and self-control. (2 Timothy 1:5-7)

I love how Matthew Henry in his commentary unpacks these words from Paul. He explains that this is “an exhortation and excitation of Timothy to his duty.” According to Henry, Paul was telling Timothy that “whether the gift of God in Timothy was ordinary or extraordinary . . . he must stir it up, otherwise it would decay.” Henry goes on to note that “the great hindrance of usefulness in the increase of our gifts is slavish fear. Paul therefore warns Timothy against this.”

Slavish fear. Fear that enslaves. That keeps me from an adventure, from the fullness of life.

In the face of it is where bravery and courage can shine the brightest, where it blazes the most glorious.

Where Does God Want You to Be Fearless?

What about you? Like me, is God calling you to be fearless in a particular area?

To say “yes” in the moments you feel afraid, and embrace the opportunities He places in front of you? To fan into flame the gift of God in you?

The truth is, I don’t choose well in every moment. But that day in The Lounge, I chose braveness over feelings of inadequacy and fear.

Nervously, I put my book down, stood up, and walked after this young woman.

And so, with my words I prayed a blessing of bravery over this pre-dawn stranger now made friend. As I did, I bore witness to my own prayer to become a more fearless woman of God.

P.S. A version of this post first appeared on FaithLife Women in 2014. You can find that here.