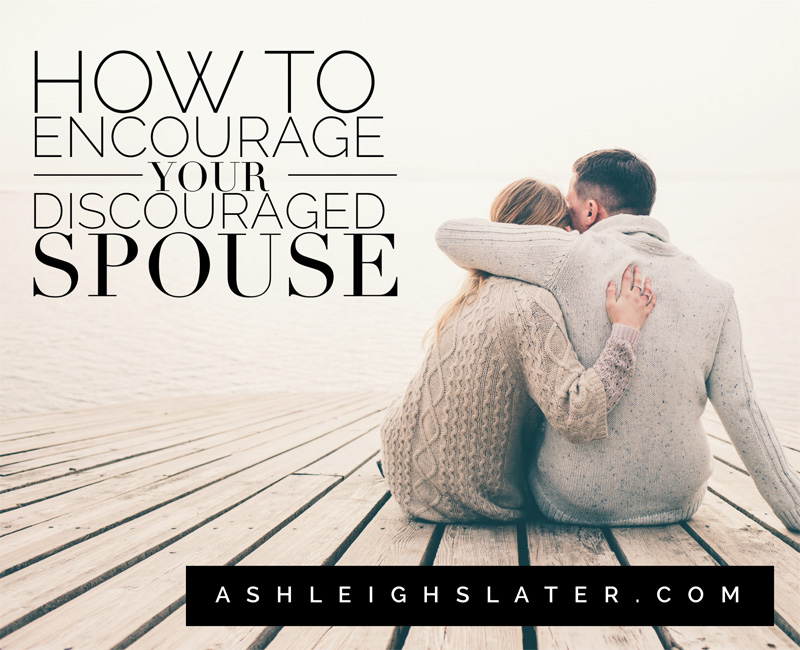 When it comes to your discouraged spouse, here’s how you can become a great voice of encouragement.

It was during a Wednesday night episode of American Idol that our fourth daughter, Dorothy Jane, took her first glimpse of this world.

This inaugural look was filled with the sights and sounds of a hospital delivery room nestled in the chilly suburbs of Chicago. Our home away from home that March day in 2011.

It came after eight hours of labor with little to no progress. It seems that Dot was in no hurry to make an appearance. Yet, as soon as we resigned to simply watch TV, she changed her mind. Within 30 minutes, there she was. Her dark hair and expressive eyes stealing the show from that year’s Top 10 finalists.

Ten minutes after her birth, Dorothy struck up a conversation with her papa. Her side all in soft coos, the only language other than “whaa!” that she could articulate back then. Our American Idol show stopper was off to a talkative start.

Two days later, Ted was handed a pink slip. Talk about a metaphorical rain on our parade of newborn joy.

It was the second time in less than 12 months.

Blame it on reductions in force. On the economy. On poor person–job fit. Blame it on whatever you will.

Regardless of the reasons behind it, this job loss suddenly clamored for the attention we longed to devote entirely to getting to know our littlest family member.

Our focus was now divided between enjoying our newborn to thoughts of how will we feed the mouths of her and her sisters? Not to mention pay rent. And heat. Oh, yeah, and that mortgage on our unsold house a few states southwest of the Windy City. The one we’d put on the market four months earlier and had yet to sell.

It also left Ted broken. Here he was, a man with two master’s degrees, over 20 years of work experience, and a mad skill set. Yet suddenly he couldn’t seem to hold a job. He wondered just exactly when had he become such a loser.

But that’s where I came in. And you can bet I took my role seriously.

You see, I became a megaphone. What do I mean by that?

Well, let’s break down the word “megaphone.” According to the Online Etymology Dictionary, “mega” comes from the Greek word megas which means “great,” while phone means “voice.” So a megaphone is a “great voice.”

In those weeks following Dorothy’s birth, I became a “great voice” of encouragement to Ted.

When he felt like a failure, post-partum me reminded him he wasn’t. Not in my eyes, the eyes of his four little girls, or in those of our loving Father.

Rather, he was a hardworking, loyal husband and papa who happened to hit a rough spot in his career. And this thing called a job — whether he had one or not at the moment — wasn’t emblematic of his identity and worth. Those were found in Christ alone.

Yep, that was me. His cheering section of one.

I believed in him when he couldn’t believe in himself. I fed him hope and courage when it seemed elusive. Not always perfectly. I had my Oscar the Grouch moments. But I think Ted would give me an “A” for overall effort.

Maybe your spouse — assuming we have a few husbands reading this also — has hit a rough season too. Maybe it’s unemployment like Ted, or perhaps it’s something else.

Whatever the source may be, it’s a time period when the odds don’t seem in his or her favor and discouragement is plentiful.

When it comes to your down-trodden spouse, you too can be a megaphone — or “great voice” — of biblical encouragement. You can cheer your spouse on so loudly and passionately and consistently with scriptural truth that you drown out the discouraging voices that whisper things like “loser.” Your life-giving words can inspire confidence and hope to well up in your spouse when it’s most needed.

You won’t always do it perfectly. I didn’t. You may even feel discouraged yourself at times. I know I did. But it will make a difference. At least it did for Ted.

Encouragement is for All Seasons of Marriage

Over three years later, we’re no longer worried how we’ll feed the mouths of Dorothy and her sisters. Or pay the mortgage and heat.

Thankfully, Ted has happily settled into a position that may be the best person–job fit for him yet. And while he doesn’t need as much encouragement as he did back then, that doesn’t mean my megaphone days are behind me.

After all, every season needs good cheer … even the pleasant ones.