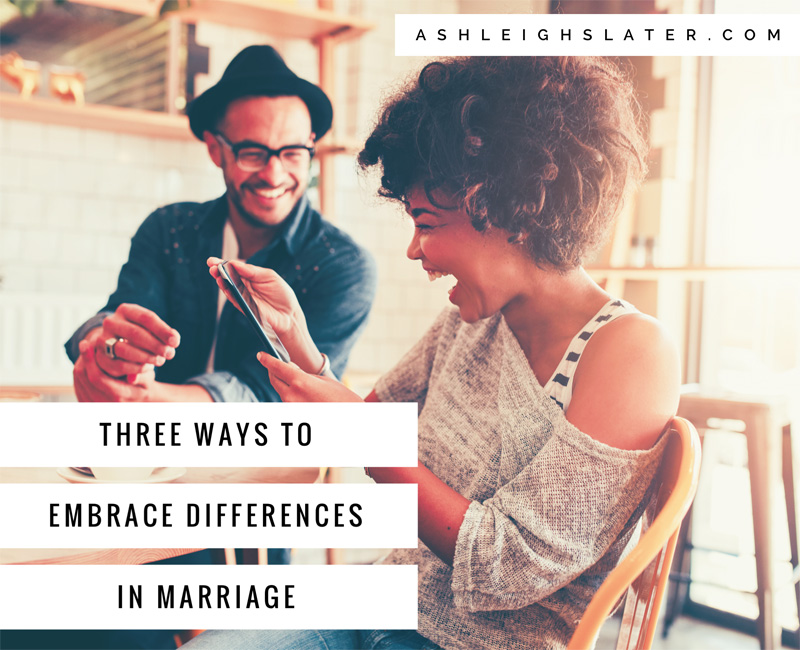 Every couple has areas where they aren’t identical in their likes and dislikes. Here are three ways to embrace those differences in marriage.

When Ted and I tied the knot, we definitely had common interests. At the same time, though, we weren’t identical in our likes and dislikes.

Sound familiar? I bet you can relate.

Me … not so much. I really preferred a visit to the dentist over watching coverage of the latest crime case or hearing conspiracy theories about Area 51. And sushi, well, unlike Ted and Tolkien’s Gollum, I didn’t care for “raw and wriggling” food.

I’ve had to ban him from all Hallmark movies except The Magic of Ordinary Days. He heckles. The mall, it gives him a headache after thirty minutes. And he finds the dialogue in Gilmore Girls unrealistically witty.

The good thing is our common interests outnumbered our differences, but that doesn’t mean those differences haven’t provided challenges at times.

A friend once told me, “The balancing act of being allowed to be two separate people inside of a one-flesh marriage” can be hard. She’s right.

So how exactly do we band together when sometimes it’s difficult to even agree on whether we’ll watch a romantic comedy or psychological thriller on Saturday night? What does this look like in the practical day-to-day of our relationship?

Here are three tactics that work well in our marriage.

1. We Build on Common Interests

When Ted and I first met, I was writing music reviews. This caught the interest of Ted, a piano, synthesizer, and organ player, who regularly served on the worship team at church. Music was an interest we built on. It still is today.

While our musical tastes aren’t exact, our love for music is an area we continue to grow in together. And because we do have common “likes,” the places where our interests diverge don’t divide us. We don’t feel the need to force the other person to enjoy all the same things.

2. We Don’t Force Change Where It Doesn’t Matter

Now and then, Ted, the political junkie that he is, offers to let me read the Free Republic threads he comments on. For those of you who are unfamiliar with this website, it’s a gathering place for the politically conservative to discuss the latest in politics. I’ve taken him up on this a few times, but mostly just to humor him. Honestly, it doesn’t intrigue me or get my blood boiling the way it does for him. As he’s come to realize this, he still sometimes points me to certain discussions, but he doesn’t push them on me.

Whether we read all the same websites or books isn’t marriage-shattering for us. It’s fine that we don’t always favor the same things since we are confident in our connection at a deeper level. While we may have day-to-day differences, we’re on common ground heart-to-heart. We’ve learned to respect, not ridicule, the other’s interests.

3. We Learn to Stretch

Sure, Ted doesn’t push Free Republic on me and I don’t ask him to shop clearance racks at Macy’s, but that doesn’t mean we don’t at least try to take an interest in what the other likes. We’ve both learned to stretch ourselves.

While I don’t think Ted will ever like Gilmore Girls, he’s given other shows that tend to have a more female viewership, such as Downton Abbey, a chance.

I’m now listening to talk radio in the form of NPR — and gasp! — actually enjoying it. The other day I even asked Google about an author who was interviewed on All Things Considered.

But perhaps the most unexpected area I’ve learned to stretch in is when it comes to that raw and wriggling food. Now, I actually get excited about eating sushi — that is, as long as I stick with spicy tuna or salmon rolls and stay away from creatures that sport suction cups or that have the texture of a bike tire.

The years have shown us that Ted’s tastes are more like a sledge hammer: scream-o, blisteringly hot Thai food, dark dystopian films. Mine are more subtle: JJ Heller, chicken noodle soup over mashed potatoes, and Cary Grant screwball comedies. But that’s okay. Oil and vinegar may not blend, but they do make for a tasty dressing.

Within our one-flesh marriage, we’ve found a happy balance. It allows “yours,” “mine,” and “ours” to coexist quite nicely. I think you can do the same. 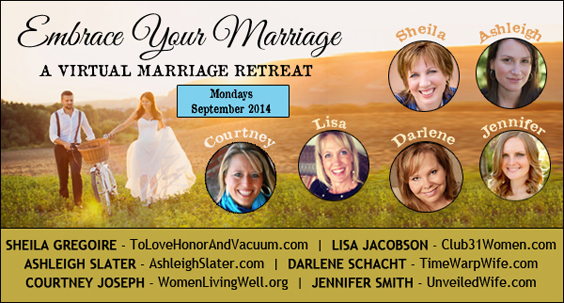 This is Part 3 in the “Embrace Your Marriage: A Virtual Marriage Retreat” series. It runs each Monday this September. Read my post “Phone Wars: The Day I Hung Up on My Husband” from September 1st here and “How to Change Together in Marriage, Not Grow Apart from September 8th here.

This week, as you strive to embrace differences in your marriage, let me encourage you to consider with this week’s challenge:

Don’t just tell your husband that you love him today. Tell him some of the reasons you love him.

Also, don’t miss my team members’ posts on embracing differences in marriage. You can find them here:

Be sure to come back here the next two Mondays for my other posts in the “Embrace Your Marriage: A Virtual Marriage Retreat” series. I’ll be talking about:

If you enjoyed this post, it’s been excerpted and adapted from my book, Team Us: Marriage Together and used with permission from Moody Publishers © 2014.