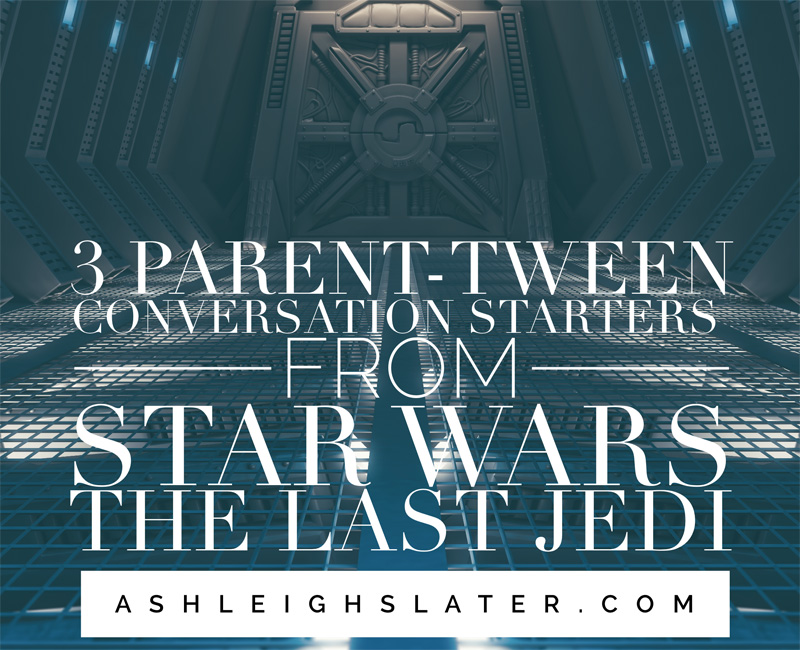 Do you have a tween who’s excited about Star Wars: The Last Jedi? If so, here are three parent-tween conversation starters from the film that are sure to get you talking.

One of the earliest films I remember watching as a child was Star Wars: A New Hope. I was around six years old, and it was on VHS on a small 1980’s TV. Think Stranger Things era, without … well, the stranger things.

While I was just a mild enthusiast (who may have envied Princess Leia’s hair), my husband Ted was a bit of a fanatic as a kid. I have twin Star Wars-themed sheets in the closet and a plethora of memorabilia in the garage to support that statement.

Over thirty years later, Ted and I have now introduced our four girls to Star Wars.

It’s been fun to watch them experience these old stories for the first time. And, perhaps even more fun, to enjoy brand new Star Wars’ adventures with them.

This week, one of my daughters and I had the opportunity to see this year’s Star Wars’ film, The Last Jedi. While The Force Awakens still ranks as my favorite, this film gave us a lot of great things to talk about afterward.

If you see Star Wars: The Last Jedi with your tween, here are three conversation starters you can talk about afterward over pizza or sushi.

1. Save What You Love

In a galactic war movie such as The Last Jedi, it’s easy for characters to get caught up in fighting what they hate. Yet, this film presents us with this idea instead: Save what you love.

It’s a great conversation starter with your tween on what motivates the battles we choose and the choices we make in those battles.

2. Failure Is a Good Teacher

Several of the characters struggle with a sense of failure. They feel defeated by their past choices. I think we can all relate to this on some level. At the same time, though, these characters are challenged to view failure as a teacher.

This film presents us with a great opportunity to talk to our tweens about failure. We can encourage them to, as some of these characters, choose to learn and grow as a result of failing.

In this film, sometimes a hero is easy to recognize. Other times, he or she isn’t. Heroes don’t always fit into a mold or even do what we expect them to. As I watched, I kept thinking, “Anyone can be a hero,” and I found that inspiring.

The Last Jedi is a great conversation starter with your tween on what a true hero is. It offers you a beginning point to talk to them about what being a hero in their everyday life may look like.

Make the Most of Your Viewing Experience

Sure, Star Wars: The Last Jedi is an edge-of-the-seat (and funny, at times too) film to enjoy with your tween. Yet, with some intention, you can go beyond that and let this new film be an opportunity to have meaningful conversations with your tween.

[Disclosure: Tickets were provided for review, but all thoughts are my own.]