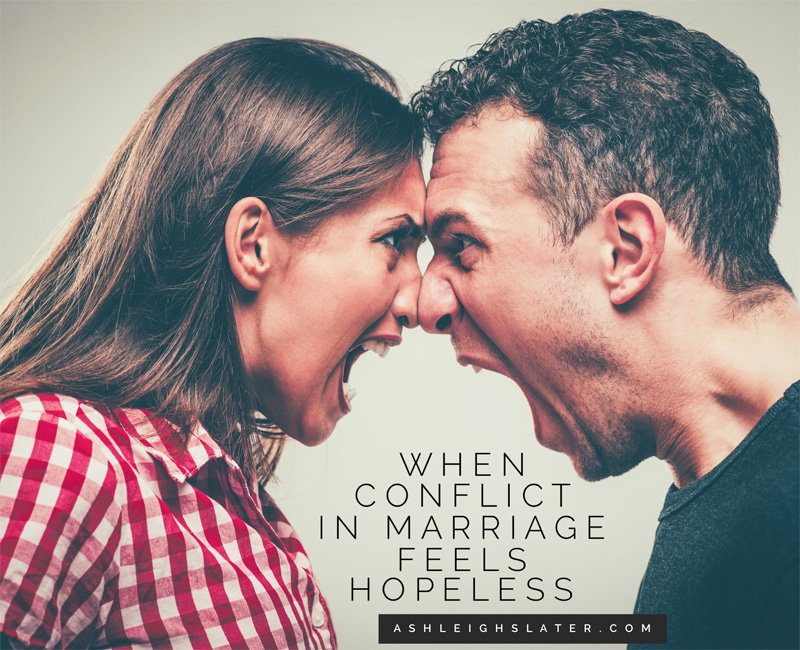 Conflict in marriage doesn’t need to feel hopeless. Here are ways you can work through it together and come out stronger.

“Is this the local train or the express?” Ted asked.

We’d just boarded a crowded Manhattan subway car, and his face was etched with urgency and concern.

“It’s the blue A line,” I responded, not sure what the issue was. The two maps I’d consulted hadn’t noted that there was more than one A train.

“But you do know there’s a difference between the local and the express, right?” Now his urgency was marked by clear frustration. “If this is the express, it may not include the stop we want.”

This wasn’t the first time in our fifteen years of marriage that we’d ridden public transportation together. We’d ventured hand-in-hand on the metro in both Paris and Washington, D.C. This was, however, the first time we’d gotten into a heated argument while navigating a subway system.

It was an argument that would follow us even after we got off at the Madison Square Garden station, and one that would result in raised voices, tears, and the desire to walk away.

Have you ever experienced similar conflict in marriage? An argument that not only left you feeling at a loss on how to reconcile, but maybe even hopeless?

Here’s the thing about conflict, it’s uncomfortable. It just is. There’s no doubt about it. However, if you and your spouse are committed to working through conflict in marriage together as a united team, it’s never hopeless.

Strategies for Resolving Conflict in Marriage

What are some ways you can do this? Here are a few strategies that have worked for Ted and I over the years.

If you and your spouse are having trouble resolving conflict in marriage, take a break and give yourself some space to individually process. Then come back and work through the conflict.

First, tell your spouse, “I need some time by myself to think about this. Let’s take a break and give each other a little room. After that, let’s continue this discussion.”

Be careful not to use a break room as an excuse to avoid dealing with an issue. The purpose of a break room —whether the literal one in an office or the metaphorical one in marriage — is to allow you to temporarily step away from the stress of your current environment, and then get back to the work at hand. Notice the word “temporarily.”

When you use a break room in marriage, it should always be with the full intention of coming back together to work through the conflict in a way that benefits the long-term health of your relationship.

Identify If a Communication Miss Has Occurred

When conflict in marriage happens, it’s best to determine whether it stems from a legitimate issue or if a “communication miss” has occurred.

What exactly is a communication miss?

Say you have a bow and arrow. You aim at the target, but your arrow goes flying past it. Or, even worse, its dejected form ends up defeated on the grass several feet in front of the target. Embarrassing, right? Sure. But it’s also easy to do.

Now imagine that your words are arrows and the target is your spouse. The objective is that your words and their intended meaning hit the bull’s-eye. You want your spouse not only to hear what you’ve said, but also to fully understand exactly what you meant to convey.

Unfortunately, this doesn’t always happen. In fact, often it doesn’t. Our words can be misheard, misinterpreted, and misunderstood. When this occurs, we have what’s called a communication miss.

How can you recover from one?

While in your break room, take a moment to evaluate what really happened. Look at the timing and delivery, as well as the situation and surrounding environment. Perhaps the where and when of how you communicated worked against clear understanding.

Also, be sure to ask yourself questions that give your spouse the benefit of the doubt, even if you really don’t feel like doing so. For example:

If you start to believe you’ve suffered a communication miss, then it’s time to rejoin your spouse. Once you do, take some time to practice one of my favorite communicate techniques: reflecting.

Reflecting requires that you take the time in a conversation to paraphrase back what you’ve heard. This gives the other person the opportunity to either verify that you’ve correctly understood their meaning, or to clarify. When you engage in the active listening of reflecting, it can prevent an already tense conflict in marriage from unnecessarily escalating.

What does it mean to face conflict in marriage as a team? After all, conflict is naturally divisive, not unifying, right?

Simply put, it requires that you and I die to ourselves. Yeah, it’s as drastic, as painful, and as humiliating as it sounds.

James, in his letter to the first-century Christians, pinpointed selfishness as what causes fights in relationships (James 4:1-3). The root of our problems being our need to have things our own way. Our natural inclination to think of “me” first and foremost.

But what would happen if, in our arguments, we decided to rebel against that? What if we approached conflict with a team-first, rather than a me-first, perspective?

A team-first perspective requires we work together for our united good as a couple, not merely for our individual interests. As members of a team, we put the long-term health of our relationship and its mission ahead of our own personal agenda.

What are some practical ways you can do this and resolve conflict in marriage in the process?

One, by adopting an “other-first” attitude. What this means is you choose not to focus on how the other person has acted poorly, but to carefully consider and take responsibility for your own attitudes and actions.

This doesn’t mean condoning or facilitating sin, or being a mere doormat. It means humbly owning our sin.

By doing so, we put the good of the relationship ahead of our individual need to be right. We also lay the groundwork in our own hearts for grace and understanding — groundwork that’s fertile soil for conflict resolution and relationship restoration.

Two, after we’ve admitted our part in a conflict, then we can consider what may have motivated the other person.

The best way to do this? Calmly ask. Get their side of the story. And, when they talk, actively listen. Use reflecting.

There’s a key to this, though. It’s this: We need to approach this with an attitude that’s bent on believing the best, not the worst of our loved one. If we bring negative assumptions and suspicions to the table, it’s going to hinder us from true reconciliation.

Conflict in marriage doesn’t need to feel hopeless. When you and your spouse are committed to working through it together in a relationship-building way, conflict can actually result in an even stronger union.

So did the A line get Ted and I where we needed to go?

It turns out it was an express train, but one that did indeed include our stop. And the good news is, Ted and I can now laugh about riding the New York City subway together. 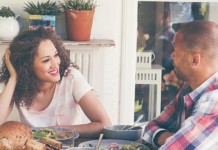 How to Serve Your Spouse a Communication Sandwich