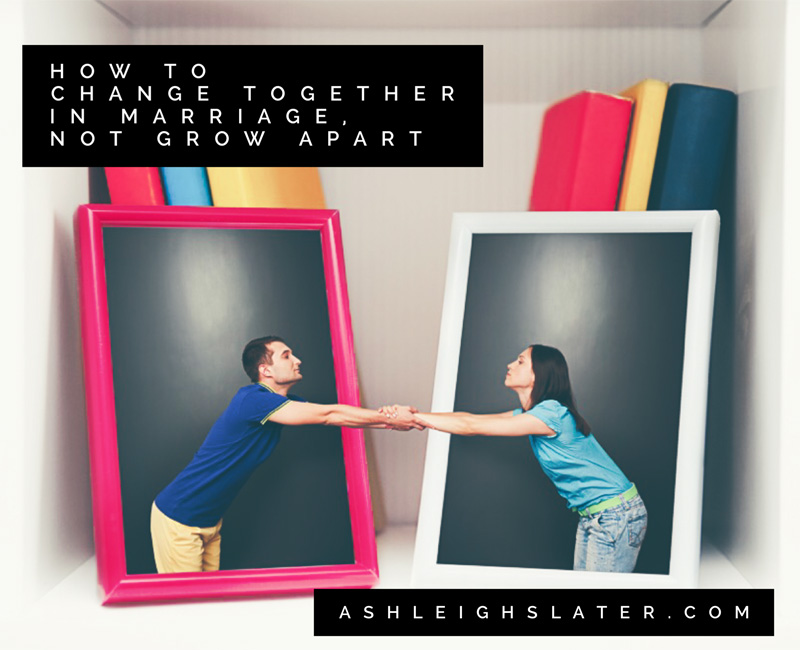 How can you change together in marriage, rather than grow apart? Here is one practical thing you can start practicing today.

The Ted I’m married to today isn’t the same Ted I married almost 12 years ago.

Sure, he has the same blue eyes. The same crazy hair worthy of his middle name Wolfgang. Yes, he still often stuns people with his dry, witty sense of humor. And, all these years later, his passion for soy sauce and politics (not necessarily in that order) remains rock solid.

But he’s also changed over the years.

He now eats leftovers instead of cereal for breakfast. He gets seriously excited to watch obscure black-and-white films like Crisis (all you Cary Grant fans out there may know that one). And, best of all, he now understands why adults go to Disney World … without their children. Although that one’s easier said than done.

The thing is, he’ll tell you the same thing about me. The Ashleigh he’s married to today isn’t the same Ashleigh he married almost 12 years ago. I’ve changed too.

Fortunately, our changes have brought us closer together. They’ve resulted in more points of connection. More shared interests. More mutual dreams. But I know that’s not always the case for couples.

I’d venture to guess that you and your husband have also changed since that day you promised “I do.” Because the reality is that none of us is static. So as long as we’re living, we all change. Without exception. (God, the Changeless One, is the only one who’s the same yesterday, today, and forever.) Which means none of our relationships is static. They change too. Including our marriages.

If change is inevitable, how can we better embrace it in our husbands and ultimately in our marriages?

One Way to Change Together in Marriage, Not Grow Apart

I believe by being intentional to change together. Side by side. Hand in hand. Over the years, that’s what Ted and I have sought to do.

This doesn’t mean you’ll both change in exactly all of the same ways. Ted and I haven’t.

When it comes to music, he didn’t like dub step or scream-o when we got married. These days, he plays both at high volumes. Me? I tolerate them because I love him. (Except when our kids are winding down for bed. Then, not so much.)

Yep, almost twelve years later, we’re still two different people with two different personalities. Because the truth is, marriage wouldn’t be quite as much fun (or perhaps as challenging at times either) if we were identical; if our personalities merged. But what changing, together, does mean is there’ll be less of a chance we’ll wake up one morning and wonder how we became strangers.

What’s one way you and your husband can be intentional to change together?

An easy place to start is by seeking out and developing new common interests. New things you love to do together. By taking the time to literally share in the other’s “joy” by stepping out of your comfort zone and trying something they like. Sushi, classic movies, camping, or perhaps even Dragon Con. You might just discover you like it too. Who knew?

Once again, we’ll have changed. But my hope is that we’ll have continued to change together. Side by side and hand in hand. A chapter or two later, our characters will change, the plot will develop, but we’ll still be co-starring in it together. 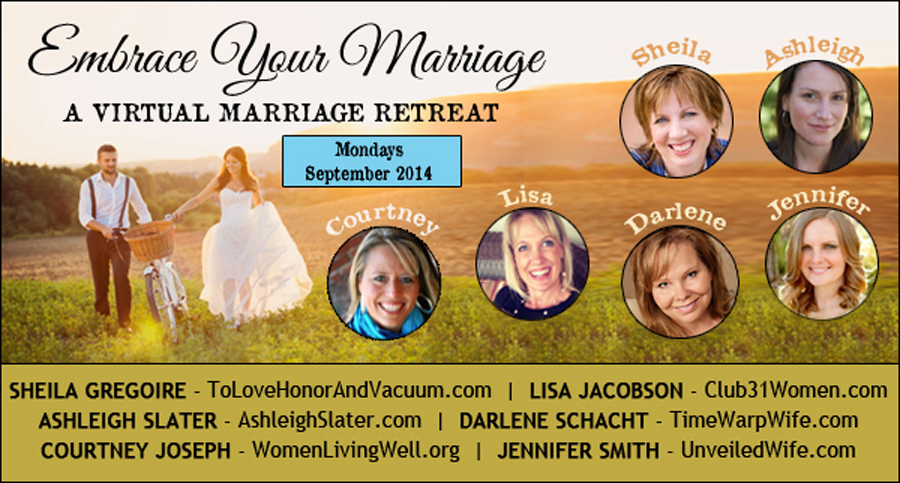 This is Part 2 in the “Embrace Your Marriage: A Virtual Marriage Retreat” series. It runs each Monday this September. Read my post “Phone Wars: The Day I Hung Up on My Husband” from September 1st here. This week, as you strive to embrace change in your marriage, let me encourage you to wrestle with this week’s challenge:

Consider some of the ways that your marriage has changed over time. Start counting the blessings that these changes have brought. Write them down.

Also, don’t miss my team members’ posts on embracing change in marriage. You can find them here:

Be sure to come back here the next three Mondays for my other posts in the “Embrace Your Marriage: A Virtual Marriage Retreat” series. I’ll be talking about: