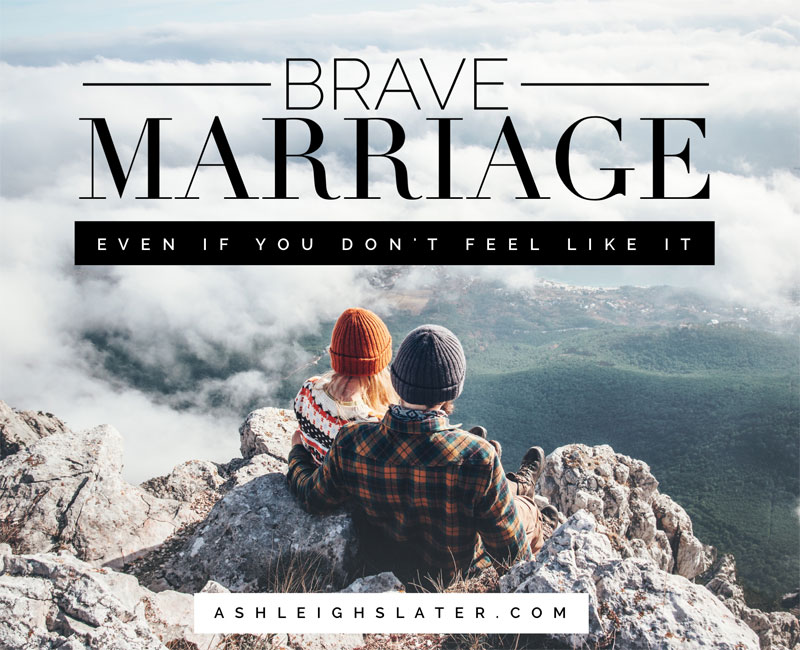 When your feelings direct you away from your spouse, determine to brave marriage … even if you don’t feel like it.

I felt my husband Ted’s fingers reach for mine as the sound of Bethel’s song, “You Make Me Brave,” filled the sanctuary.

This was Ted’s brave act of the day.

We’d had a rough month, he and I. Perhaps you could even say we felt a bit like Alexander. You know, the little boy who had the terrible, horrible, no good, very bad day.

Except our “terrible, horrible, no good, very bad” dragged on for weeks.

Why We Needed to Brave Marriage

It began with me, one of our daughters, and a car that overheated itself to death on a freeway off-ramp two hours from home.

What followed next was a series of frantic phone calls (which included me hanging up on Ted in frustration), a tow truck, a $60 taxi ride, and a rental car (I had to be in South Carolina … so there was no turning back home).

By the end of the day, I was physically, mentally, and emotionally beat.

Two days later, Ted and I returned the rental car. Not only were we over-charged, but one of the managers attempted to pit Ted and me against each other as we tried to resolve the billing issue. Both of us returned home exhausted.

It then took two weeks for the shop to even diagnose our car’s problem.

And once they did?

The bill was enough to fund a weekend getaway for our family of six.

Three weeks after the car over-heated, we made the two-hour trek to pick it up. Twenty minutes after leaving the garage, we discovered that the problem still existed. Once again, our car needed a Mater-like lift back to the shop.

Frustrated and defeated, we drove home with one less car than we’d planned.

On the heels of the rental car fiasco, came a family-wide stomach virus, Ted’s blood pressure skyrocketed into dangerous levels, and I discovered “slightly abnormal” moles that had to be removed.

It was stressful to say the least. Both on us individually and on our relationship.

The Decision to Brave Marriage Together

I wish I could say that during this time Ted and I actively put into practice the words of James. The ones about “counting it all joy when you meet trials of various kinds” (James 1:2). Instead, we both got grumpy with each other. Very.

But that morning, as we sang that song, Ted bravely reached across the frustrations and the grumpiness and the poor communication for my hand. Our relationship still strained, he put himself out there for rejection.

Would I – his wife who wasn’t currently feeling connected with him – reach back? Or would I ignore his attempt? Would I shut him out?

As I felt his touch, I did reach back. I went against my feelings of hurt, irritation, and disconnectedness and I interlocked my fingers with his.

If those terrible, horrible, no good, very bad weeks reminded me of anything, it was this: my feelings are fickle. They aren’t reliable.

Sure, they can be convincing when I’m stressed and tired and grumpy. Yep, they seem real in those moments when I look at Ted and think, “Hmm … I don’t really like you all that much right now.” But they aren’t really.

The Bible confirms this. In the Old Testament, we read as God – through the weeping prophet Jeremiah – told the people of Judah:

“The heart is deceitful above all things and desperately sick; who can understand it?” (Jeremiah 17:9)

How true this is. How much I need to be continually reminded of this truth about the heart. Ted’s heart. My heart.

You see, it’s in those moments when my feelings point me away from Ted, that I need to cling tightly to that promise I made for better and for worse. The promise that is weightier than dead cars and stomach viruses and weeks when we both could wear the shirt, “I’m with Grumpy.” It’s that promise that can and should trump my fickle feelings.

And here’s what’s interesting. I’m finding that when I do accept Ted’s hand – that is, when I respond with right action even if my feelings aren’t inclined to – that’s often the first step to reconciliation when we hit rough patches.

Because my feelings? They’re fickle, remember?

The funny thing about them is they’ll eventually follow where I choose to lead them. They’re good that way.

You Can Brave Marriage Too

Maybe like Alexander, you’ve had a terrible, horrible, no good, very bad day recently. Or like Ted and me, a not-so-great month. Maybe it’s left you grumpy with your spouse too. If so, why not choose to be brave today? To reach across your own frustrations and take the other’s hand.

You may just find, like us, that with time, your feelings will soon remember how much you really do love each other, even like each other … bad days and all.

P.S. This post was taken from my 2014 archives, updated slightly, and republished here.

How a Shared Activity Helps Your Marriage