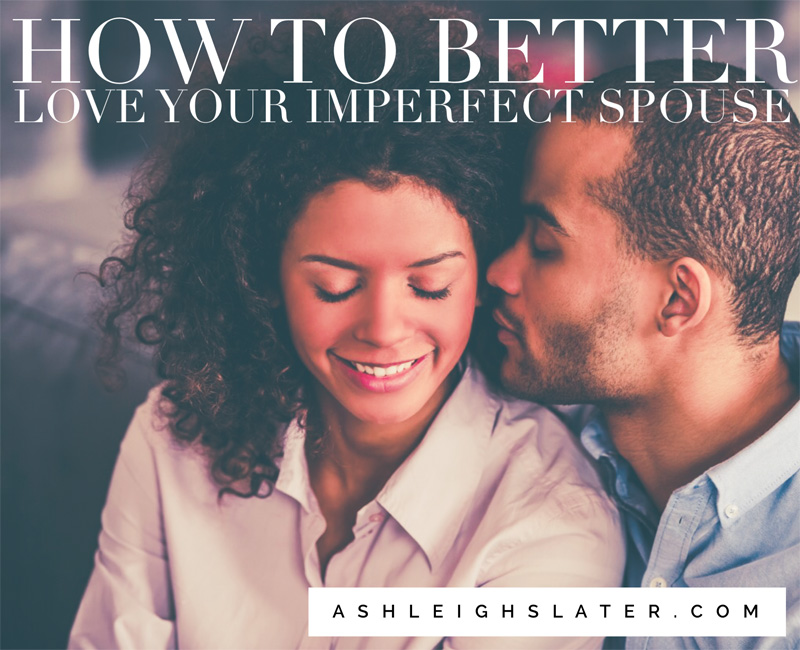 Are you struggling to love your imperfect spouse well? If so, here’s one secret to overlooking flaws and building your spouse up in the process.

Well, I’ve been asked about them more than once … including on live radio. I suppose that’s what comes from devoting an entire chapter in my book Team Us to the “killing” of old habits in marriage.

And do you know what happens? Every. Single. Time.

My mind goes blank. After which, I end up muttering something about Ted’s time management issues. A flaw for which with every additional interview I do, I think he’s slowly earning the reputation as poster boy. You see, in that Bill-Murray-Groundhog-Day-type-moment of mine, it’s all I can come up with.

It’s not that Ted doesn’t have any other flaws. Of course, he does. He’d probably be the first to list them off for you. So my blank mind isn’t the result of a lack of flaws. Instead, it’s a happy outcome of my focus. A focus that has come about after years of practice.

You see, I choose to overlook Ted’s faults. To let them go.

But this isn’t a quality I naturally brought to our marriage. It’s the result of years of intentionally training myself to do so.

It’s only easier now because it’s a habit that’s been formed with time; something that’s slowly becoming a natural reflex as I make an effort to be forgetful where it matters most.

Thankfully, Ted has learned to do the same when it comes to my failings.

And just for clarity’s sake, I’m not referring to excusing sin patterns Ted may have where there’s no improvement or desire to change on his part. You know, those things that could prove destructive not only to our marriage, but to Ted personally. I’m talking about those areas where he knows he could do better, but his progress might be slower than I’d like.

So how do I overlook flaws?

And no, it doesn’t involve dramatically breaking into a certain charting-top Disney song. Well, not too often.

The Secret to Loving an Imperfect Spouse Better

Here’s the thing, though. While I do think about what I admire about him, I don’t always tell him. At least, not enough. In her book, Women Living Well, Courtney Joseph reminds me that I should really be more intentional to do so. She writes:

Showing your admiration to him is so important. You may think he already knows the things you admire about him, but in reality, we don’t tell our husbands often enough how much we do. So take the opportunity today!

What a great idea!

While she suggests actually sitting down and writing out a list of ten things, for me, I think sharing “10 Things I Love About You” to Ted in one sitting might feel unnatural.

But what I can do is spread these words of affirmation over the course of a week or two – a text here, a magnetic letters on the fridge note there.

It’s true that a surge is sometimes necessary – in a Middle East skirmish or a struggling first-world marriage – but in Ted and my just-fine marriage, spreading the love over a few days is perfect. I can take the heart of this much-needed encouragement and flesh it out in a way that works well for our marriage.

Perhaps in my next book-related interview, I’ll even throw one of those things I admire about Ted in too … yes, on live radio.

I predict that after days and weeks and months of intentionally sharing those things I love about Ted with Ted, I’ll find that speaking them out loud has become – just like living well, forgetfully has – another natural reflex.