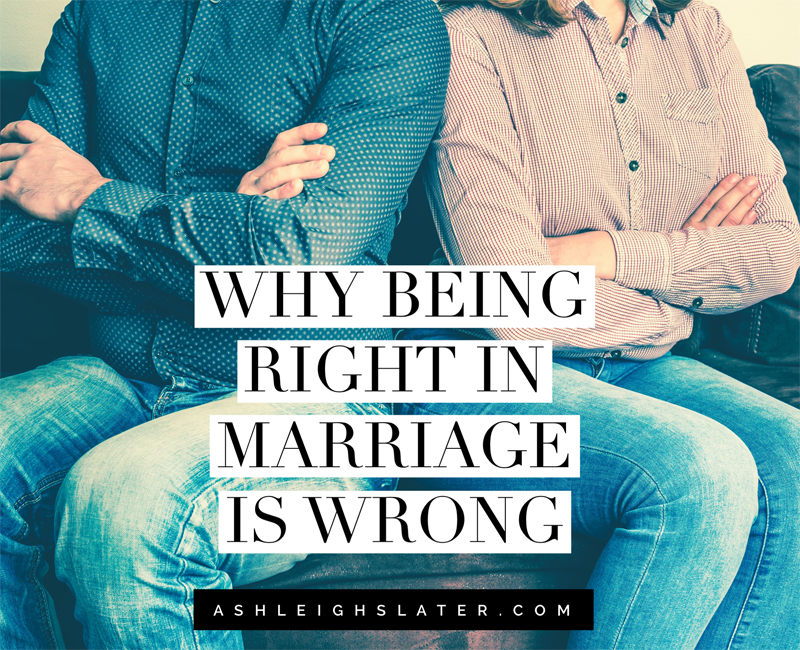 Do you or your spouse always need to be right in your marriage? If so, being right in marriage is the wrong goal to have. Here’s why.

Truth be told, I don’t know much about him. You know, other than the obvious like sometimes his work uniform is wolverine wear.

Recently, however, I heard something interesting about his personal life.

Did you know he’s been married 18 years and counting?

He and his wife must be doing something right to stay married that long while working in an industry that isn’t known for long-term marriages.

Because, let’s face it, this husband-wife thing is hard enough when you work a regular nine to five and have a handful of kids to raise.

Throw in travel, production schedules, and Hollywood magic, and I’m sure it only complicates the relationship more.

Hugh Jackman’s Best Marriage Advice About Being Right in Marriage

Well, O: The Oprah Magazine asked him just that back in December 2012.

“Your wife is always right,” he answered. “Very simple. I think I’m going to get it tattooed on my forehead.”

It isn’t just actors like Jackman or mainstream magazines like O that offer this as an ingredient for marital bliss, though. Just the other day I heard a female radio host on my local Christian station ask a guest, “So who’s always right in your marriage?”

“My wife,” replied the husband of three months.

To which the host laughed in response, “Smart man.”

I don’t know how many husbands actually subscribe to this mantra in order to keep peace in their marriages, but I can tell you that my husband Ted isn’t one of them.

And you know what?

As frustrating as it is sometimes when he doesn’t always agree with me, I can honestly say I’m glad that’s the case.

Why Being Right in Marriage is Overrated

You see, as a Jesus-loving woman and wife, I’m not called to be right. No matter how much I may want to be at times.
Rather, for the sake of unity in our marriage, I’m called to be humble.

The same applies to Ted. He’s not called to be right either. He too is called to humility.

Seems like I pulled that one out of the air right?

Why not “respectful”? Or “truthful”?

Well, in Ephesians 4:1-3, the apostle Paul reminds us to:

Walk in a manner worthy of the calling to which you have been called, with all humility and gentleness, with patience, bearing with one another in love, eager to maintain the unity of the Spirit in the bond of peace.

What exactly does this mean? Matthew Henry, in his commentary on this passage, wrote:

The first step towards unity is humility; without this there will be no meekness, no patience, or forbearance; and without these no unity. Pride and passion break the peace, and make all the mischief. Humility and meekness restore the peace, and keep it.

When it comes our marriages, we can help maintain the peace not by hoping that our husbands, if ever asked, applaud us as always right. But instead by:

If I Ever Meet Hugh Jackman

I doubt I’ll ever meet Hugh Jackman and his wife. But, on the off chance that I do, I’m going to congratulate them on 18 years and counting of marriage.

And, I may even ask, “So, what’s your second best piece of marital advice?”

A version of this post originally appeared at Faithlife Women on October 29, 2014.