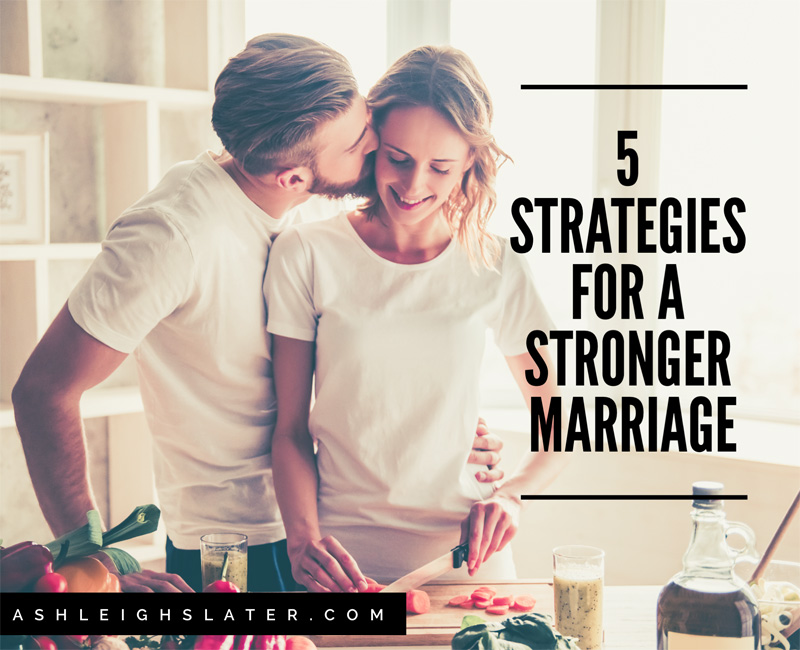 If you and your spouse are struggling to be a united team, here are five strategies you can put into practice for a stronger marriage.

Some brides and grooms faithfully plan for their first dance as husband and wife. Song choices are carefully considered and dance lessons taken.

Not my husband Ted and me.

Instead, we unintentionally adopted a drastically different approach. You see, in all of our wedding preparation, we forgot to think about our first dance.

So we winged it. It was “first dance” improv, all the way.

As you can tell from this reception picture, our first dance was fun and memorable, but it certainly wasn’t World of Dance worthy. We were no Keone and Mari. Not even close.

It’s been almost fifteen years since Ted and I walked hand-in-hand onto that dance floor. What have I learned about marriage since then?

Marriage requires much of the same teamwork and interdependence that dancing does.

Yet, much like Ted and I did for our first dance, many of us “wing it” when it comes to our marriages. Before we know it, our relationship becomes an extended game of improv.

Communication misses. Conflict. Days, or weeks even, when we don’t feel like braving our marriage.

Maybe you and your spouse are currently experiencing this. If so, here are five strategies to help you build a stronger marriage.

5 Strategies for a Stronger Marriage

When Ted and I first got married, he was a night owl. I, on the other hand, was an early bird.

Most mornings, I left for work before he’d even eaten breakfast or showered. Then, in the evenings, I was ready for bed not long after he got home from work. With time, the differences in our schedules left us feeling disconnected.

Perhaps you can relate. It could be that you’ve also discovered that syncing your routines is a challenge. If so, I’m here to encourage you. Almost fifteen years later, Ted and I now go to bed almost every night at the same time.

How did we get from there to here?

With one simple change: We now end each day with a shared activity. For us, this activity is binge-watching on Netflix and then drowsily discussing the characters and plots.

Pursuing shared activities doesn’t mean you have to go to bed at the same time. What it does mean is that you’re purposeful to carve out time each day to do something with each other.

Maybe you have coffee together in the morning. Perhaps it’s hitting the gym together or talking over dinner. Make a plan and start putting it into action this week. If you find that the shared activity you decide on doesn’t work after all, pick something else and give it another try.

Sometimes I agree to watch what turns out to be a painful sci-fi flick with Ted. After the film ends, he slowly turns his head toward me apologetically and says, “I owe you.”

Whenever Ted says this following a movie, it means I’m entitled to pick the next two or maybe three movies we watch. And, just for the record, when it comes to bad sci-fi flicks, the “I owe you” is all in fun.

There are times, though, that I carry this idea of “you owe me” into other things. For example, those mornings I let Ted sleep in while I care for the kids on my own. Moments when I’m tempted to take a sacrifice I’ve willingly made and add strings to it.

Do you ever do the same?

While there’s nothing innately wrong with quid pro quo, carrying around an attitude of “you owe me” can easily led to disappointment and ultimately grudges and resentment.

One way you can avoid this in your relationship is by clearly communicating your expectations to your other half. If you’re anticipating payback for something you do, be direct and up front about it. Just be sure that you do so in a gracious manner. Otherwise, let your act of love come freely, without strings attached.

3. For a Stronger Marriage … Cater to the “Silly” Preferences

In our first few months of marriage, I quickly learned that Ted had a very specific way he liked his T-shirts folded. This was all well and good if he was the one doing the laundry, which he often did. But for me, it was an adjustment to change my T-shirt folding ways.

Yet, instead of rolling my eyes or refusing to do his laundry along with mine, I changed the direction of my fold.

I’m glad I did. Through this, I learned that sometimes loving Ted is as easy as folding T-shirts a particular way.

Each time I put the energy into catering to one of his seemingly random preferences, rather than lazily resorting to mine, he feels heard, loved, and respected. I feel the same way when he caters to one of mine.
What about your other half? Is there a preference that seems silly to you?

Maybe like me, it’s how T-shirts are folded. Perhaps it even leaves you wanting to roll your eyes or shake your head.

If so, I encourage you to consider catering to your loved one instead. You might just be surprised how something so simple makes your spouse feel heard, loved, and respected. And, as a result, strengthens your connection with each other.

4. For a Stronger Marriage … Choose Lightheartedness

Ted and I ended a recent year with much coughing and sneezing. A week before Christmas, our entire family was hit by an upper respiratory infection that lingered … and lingered. It was miserable.

Do you know what we decided to do?

We chose to hear the chorus of coughs that resounded through our house not as an inconvenience that threatened to ruin our holidays, but as part of our end-of-the-year story. A chapter that we decided would be marked by chicken noodle soup and family movie nights snuggled on the couch together rather than frustration.

Decide together to approach life with a sense of lightheartedness. With a heart that’s light, not heavy. While this points to the ability to laugh together at things like colds and coughs, don’t stop there.

Also choose to practice a lightheartedness that comes from what I call in my book Team Us an “unburdened heart.” Or, in other words, a heart that’s not weighed down by grudges toward one another.

If you’ve kept a list of the ways your spouse has failed, disappointed, or hurt you in the past, determine to let these things go – either personally or, if they are deeper issues, through the help of a trusted counselor – and determine that you won’t keep a “record of wrongs.” That instead, you will strive to not be so easily offended, to do your best to overlook offenses, and to seek to be a team.

5. For a Stronger Marriage … Determine to Fight as Allies

For us, conflict over the years has been inevitable. It’s never been about whether we will fight – because we do and we will butt heads – but about how and when we fight.

We’ve learned that in order to maintain that “us vs. the problem” attitude rather than the “me vs. you” mentality, we’ve had to determine to fight as allies, not as enemies. This means doing our best to work through conflict with each other in a way that serves to unite us and benefit the long-term health of our marriage.

How can you do the same in your relationship?

Dictionary.com defines allies as “a person who associates or cooperates with another; supporter.” When we cooperate with someone, we work together for a common purpose. In this case, to resolve conflict in a healthy way. This can be tricky though when tempers and heightened emotions are involved.

The next time you find yourself in a heated argument, consider temporarily (and calmly, if possible) stepping away from the conflict to give yourself room to calm down and think through the fight. As you do, make an effort to attempt to understand where your loved one is coming from.

Also, be sure to consider those things for which you need to own and offer an apology. Taking responsibility for your part in a fight can go far in facilitating reconciliation and strengthening your team.

Work Toward a Stronger Marriage Now

Ted and I may have winged our first dance as husband and wife, but we’re doing our best not to improv when it comes to our relationship.

I hope the same can be said of you. If not, it’s not to late to start working toward a stronger marriage.