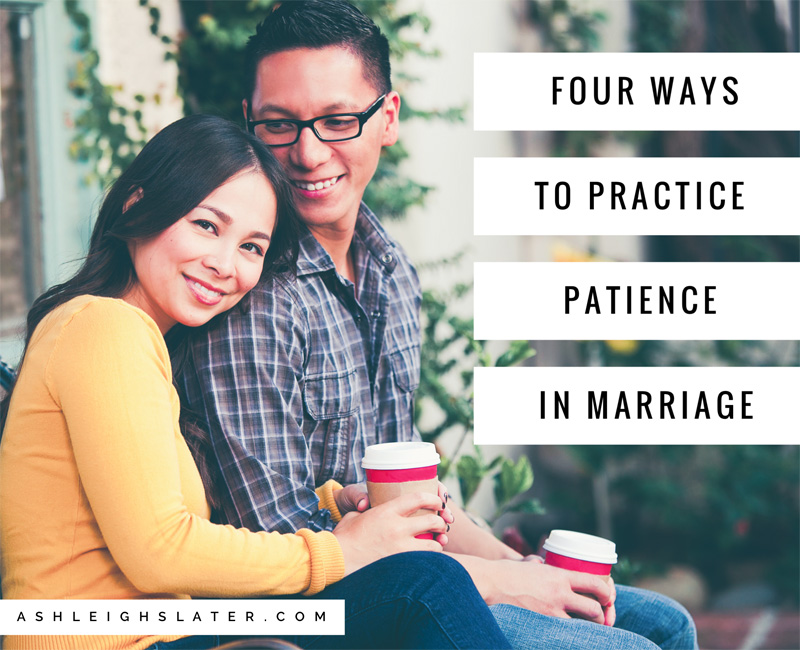 Are you struggling to practice patience in marriage? Here are four things you can do.

In the weeks that led up to our wedding, my husband Ted informed our friends, family, and anyone who would listen of his impending death.

Yep, death. Death, that is, to his single self.

The self that could buy a new Nord Electro on a whim. Or stay up until two in the morning on a regular basis. That guy who worked late into the evening because he didn’t have a wife waiting at home.

Sure, death isn’t the most romantic thing to broadcast prior to one’s nuptials, but Ted was right. Marriage doesn’t jibe well with many of the single habits brought to it. What I don’t think he anticipated, though, was that the death of old patterns takes a while.

In the last eleven years, here are four practical ways we’ve learned to practice patience in marriage for the old habits as we work together toward the new. You may find them helpful too.

1. We Pick Our Battles

I’ve come to realize that not all of Ted’s old habits are necessarily sinful. Now, before I address a behavior of his, I first stop and categorize it.

Sin means to “miss the mark.” So I ask myself: Is Ted missing God’s mark? Or is he simply missing mine? Is it a quirk I find grating, or is it offensive to God and hurtful to our relationship? If it’s a matter of annoyance, not destructiveness, then maybe I — and not Ted — am the one who needs to change.

Sometimes the bothersome things simply aren’t worth the battle. Often when I choose to move a bothersome thing to the conversational front burner, it doesn’t improve my marriage, it simply feeds my need to have things a certain way. The majority of the time it’s better for me to apply the wisdom of Proverbs 19:11 here, which says, “Good sense makes one slow to anger, and it is his glory to overlook an offense.”

2. We Have a Realistic View of Ourselves

Sometimes my habits don’t seem as bad as Ted’s do. There are instances when I’m inclined to give myself a break, but not so quick to give him one too.

The problem is, though, drawing comparisons between our habits masks the reality that I’m no better than he is. While, yes, some behaviors are more destructive than others, we can both use growth. When I put my own behavior into perspective, it gives me more patience for Ted in the areas he struggles.

3. We Sandwich Our Criticism

Ted and I both earned master’s degrees in communication. One of our favorite techniques we picked up in our studies is what’s termed the “communication sandwich.” For those of you unfamiliar with this, it basically boils down to using praise and affirmation to sandwich criticism.

What I love about this approach is that it doesn’t put Ted on the defensive. When I use it, not only do I speak well of him, pointing out the ways I recognize and appreciate him, but I’ve also made it about me. I’ve focused on a “this is how I feel,” rather than a “you did this” approach.

4. We Focus on Progress, Not Perfection

Nowadays, Ted doesn’t buy a Nord Electro on a whim. He also doesn’t stay up until two in the morning on a regular basis. But time management is still an area under construction that could easily leave me frustrated.

But I’ve determined not to focus on his failings, rather on his successes. When frustration sets in, I stop myself and focus on all the ways Ted has grown and improved in this area over the years. It’s hard to be angry when I realize just how far he’s come.

At times, it has seemed inconceivable that some of those pesky single behaviors Ted and I both brought to our marriage would change. But we’re finding that we can kill old habits with time. Ted’s not where he was ten years ago, and I know he won’t be where he is now in another decade. He can say the same for me.

I’m excited to join Lisa at Club 31 Women, Darlene at The Time-Warp Wife, Courtney at Women Living Well, and Jennifer at Unveiled Wife for this week’s Summer Marriage Splash! 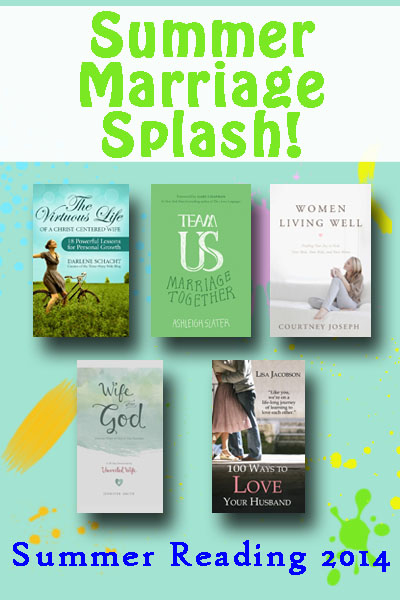 Today’s post is part 5 of the series. It’s an excerpt for you from Team Us and is used with permission from Moody Publishers © 2014. If you missed the other posts, here’s a recap:

Monday: The First 5 Steps Toward a Loving Marriage from Lisa Jacobson at Club 31 Women
Tuesday: I’m Not a Perfect Wife, But I am Perfected by Grace from Darlene Schacht at Time-Warp Wife
Wednesday: How to Banish Bitterness in Marriage from Courtney Joseph at Women Living Well
Thursday: Drawing Closer To God & Your Husband When The World Says DON’T! from Jennifer Smith at Unveiled Wife

Five days. Five bloggers. Five books. Each one — including my new book Team Us: Marriage Together which just released June 1st — would make a great addition to your summer reading list.

100 Ways to Love Your Husband by Lisa Jacobson

“This is a ‘must have’ little book for every married woman or yet to be married woman! It comprises 100 practical little thoughts, well laid out and each one profound and challenging in its own way.” — Amazon review

Club 31 Women: Sharing a Passion for Husband, Home and Family

The Virtuous Life of a Christ Centered Wife by Darlene Schacht

“Powerful, is right. This is such an encouraging and challenging book for any wife to pick up — whether she’s newly married or been married for many years.” — Amazon review

Time-Warp Wife: Keeping Christ at the Center of Marriage

“I came away from the book with practical tips to loving my family better, making my home a haven and strengthening my relationship with Christ.” — Amazon review

Women Living Well: Finding Joy in God, Your Man, Your Kids and Your Home

Wife After God by Jennifer Smith

“Whether you are going through a rough patch in your marriage (like we all do!) or your marriage is doing wonderfully, there is something in here to encourage, challenge you and help you improve your marriage and your walk with The Lord.” — Amazon review

Team Us: Marriage Together by Ashleigh Slater

“Team Us is a lighthearted, encouraging read with a poignant message: marriage is one of the greatest adventures God gives us in this life. Make the most of it!” — Amazon review

Ashleigh Slater: Encouraging Couples to Do Marriage Together