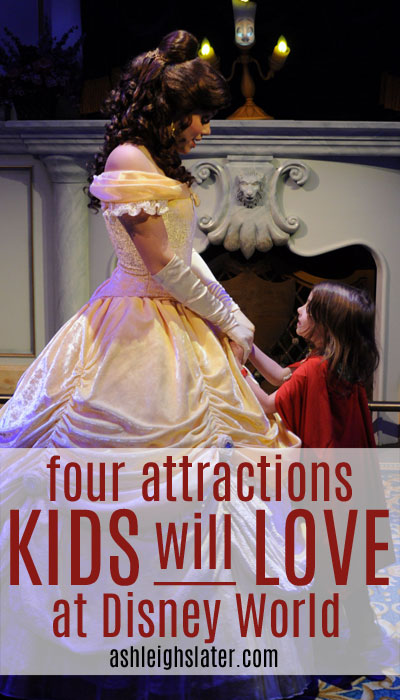 A few weeks before Christmas, Ted and I packed our four kids into our mini-van and drove the almost eight hours to central Florida.

After a year of dreaming as a family and months of planning, we couldn’t wait to spend ten days staying on property at Fort Wilderness and park hopping between the Magic Kingdom, Epcot, Hollywood Studios, and Animal Kingdom..

Our trip did not disappoint. We made the most of our ten days there and did a ton. During that time, my kids and I did have a few favorites that stood out.

If you are currently planning a trip to visit Mickey and friends, here are four attractions I’m confident your kids will love at Disney World too.

Four Attractions Your Kids Will Love at Disney World

#1. Enchanted Tales with Belle at the Magic Kingdom

When the new Fantsyland was added to the Magic Kingdom in 2012, with it came Enchanted Tales with Belle.

With this one, Disney outdid themselves!. It is not to be missed.

This attraction provides an intimate venue for children and parents to become part of a classic Disney tale.

The line starts in Maurice’s cottage. However, visitors are soon transported through a magic mirror into the Beast’s castle. There, they are invited to play roles in a story told with Belle. On this visit, our four girls were cast as the Beast, Phillipe, Mrs. Potts, and Chip.

A word of advice, though: Get in line for it early — it’s popular.

Afterward, be sure to eat lunch at the Be Our Guest Restaurant. During the day, it’s causal dining. Don’t let a long line for the restaurant’s quick serve deter you, it moves fast and is worth the wait.

Honestly, I never fully appreciated Disney’s Animal Kingdom until this trip. And I had been there several times over the years.

It’s all because the girls set out to become Wilderness Explorers there. You know, like Russell in the Pixar film, Up.

Participants are given a Wilderness Explorers Handbook and are able to earn 30 badges (a.k.a. stickers) throughout the park at a variety of stations.

This activity (which we did over a two-day period) helped us slow down and ease our way through the park, taking us places we had overlooked in the past as we raced from ride to ride or show to show. One of our favorites was the bat badge.

Even though it is time-consuming, this is an activity that’s at the top of my list for the next time we go. I’m not sure who enjoyed it more — the kids or me!

If your kids are anything like mine, they love Star Wars. At Disney’s Hollywood Studios, kids ages 4-12 can sign up for the Jedi Training Academy.

They’ll learn how to operate a lightsaber as they train to be a padawan — and, they’ll even get to battle against Darth Vadar. This was the second time our kids participated. They had a blast … although, our five-year-old was a bit scared of Darth Vadar, not that you can tell that from the picture below!

This is another attraction that you have to head to early, but it’s worth it. Like Enchanted Tales with Belle, the Jedi Training Academy makes Walt Disney World feel a bit smaller and more personal.

As a homeschool mom, I’m constantly on the lookout for opportunities to reinforce what we’ve learned in our daily studies — whether it’s with films, museums, theatrical plays, or historic sites. Epcot’s World Showcase fit into our World History lessons perfectly!

Many of the countries there — such as Norway, China, Japan, Germany, Italy, France, and England — are ones we’ve covered in the last year or two. While I realize that these areas are just “snapshots” of culturally rich and diverse nations, they are a great way to give kids an overview of these countries.

To help us make the most of our time there, we bought a World Showcase Passport to share as a family. It’s available at stores throughout the World Showcase.

Then, at the Kidcot Fun Stops in each country, we met one or two individuals from that homeland, had them write a special note in our passport in their native tongue, and got the passport stamped.

This was another activity, like the Wilderness Explorers Program, that helped us slow down. We also loved the Kidcot Fun Stop activities. We did this along with the passport.

Like my kids did, I’m confident these four attractions are ones your kids will love at Disney.