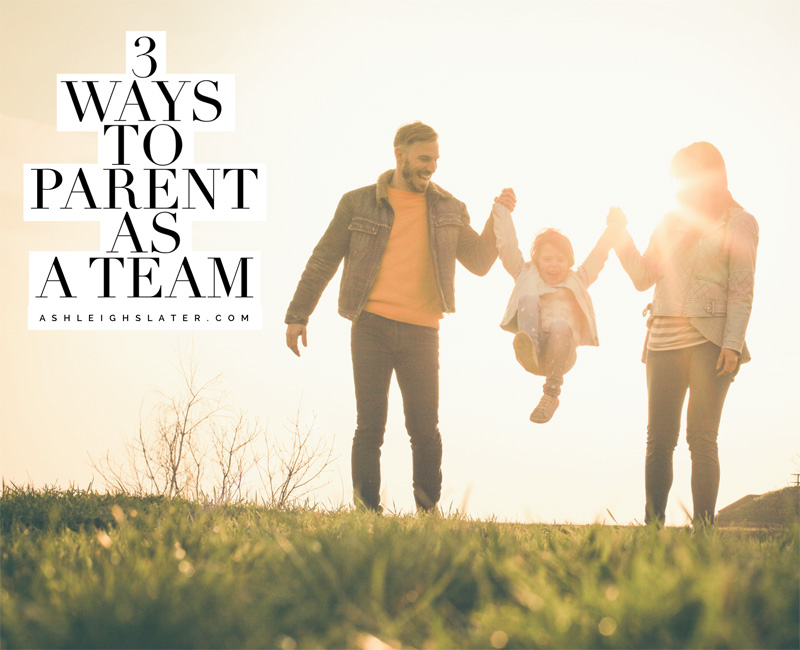 Here are three things to help you and your spouse better parent as a team.

When our first baby was born, my husband Ted and I discovered that teamwork during pregnancy was the simple part.

It didn’t take much for Ted to hop in the car and make a food run for me. But getting up in the middle of the night to help me with a screaming newborn? That required more sacrifice. It wasn’t much easier for me. At two in the morning, neither of us was thinking “teamwork.” We were thinking, “Ugh …. it has to be his turn to get up and change her diaper, not mine.”

Years later, we’ll tell you that having kids is well worth the effort. Yet uniting together to raise kids certainly hasn’t been easy.

One reason is that we don’t approach it in exactly the same way. Sure, we agree on all the essentials, but we differ in the ways we live out many of the smaller areas. And at times, we’ve let this complicate rather than contribute to and enrich our parenting.

We’ve found, though, that even if we differ in some of our approaches, it is possible for us to parent as a united team. We just have to work hard not to allow those areas of difference to divide us.

How do we do this?

Here are three things I’ve discovered go a long way toward helping Ted and I better parent as a team.

I’m a writer and homeschooling mom. As much as I love our children, by the end of the day, I’m tired.

Unlike me, Ted isn’t home all day long. For him, the evening hours equal quality time with the girls. So when it comes to bedtime, he’s more lax. For a while, I got on his case about this. That is until I realized that criticizing a later bedtime meant I was questioning his decision to spend more time with our girls. Once I saw this clearly, I shifted my focus.

Instead of being upset that they aren’t in bed as early as I’d like, I’ve come to appreciate that this man I married loves spending time with his daughters. He doesn’t run from that at the end of a long day, he runs to it. If I’d stayed so stuck in my strict perceptions of what bedtime should be, I’d have missed the beauty of this.

“Oh, Papa, look at that Lego set! I really want it!” is the common cry heard whenever we venture into any store that carries the coveted blocks. “Let’s go look!” Ted replies in excitement. “Tell me what you like about it.”

I used to get frustrated by Ted’s response. How could he fuel excitement that I knew would be quickly extinguished? Couldn’t he see that he was setting them up for disappointment? But he wouldn’t alter. I finally figured I had one good option left: give up trying to teach Ted and instead learn from him.

So the other night, I did something he would do. Rather than reading a storybook to our third daughter before bed, I spent a half-hour perusing the American Girl catalogue with her. It was like window shopping from the comfort of her bedroom. We ended up having a great time.

“Ugh,” I complained, “why did your papa pull the car in at an angle?”

I was attempting to back our minivan out of our garage. We have one of those two-car garages that’s divided into individual, narrow doors. If we don’t pull our van in just right, backing out is a logistical nightmare. Ted and I both have different solutions for this. I pull in straight; Ted drives in at an angle.

As I bemoaned the task in front of me, I suddenly remembered I had an audience. Four sets of little ears were listening as I griped about their papa. I stopped short. You see, I’d broken one of my primary rules: do not speak badly of Ted to our kids.

Since I’m with them more than he is, I have a lot of influence when it comes to shaping how they view him. When I choose to speak well of him to our kids and support the decisions he makes, I’m being a team player.

How Well Do You Parent as a Team?

What are specific ways can you appreciate, learn, and support the unique things your unique spouse brings to the parenting of your kids?

Parts of this article have been excerpted from Team Us by Ashleigh Slater. Used with permission from Moody Publishers © 2014.