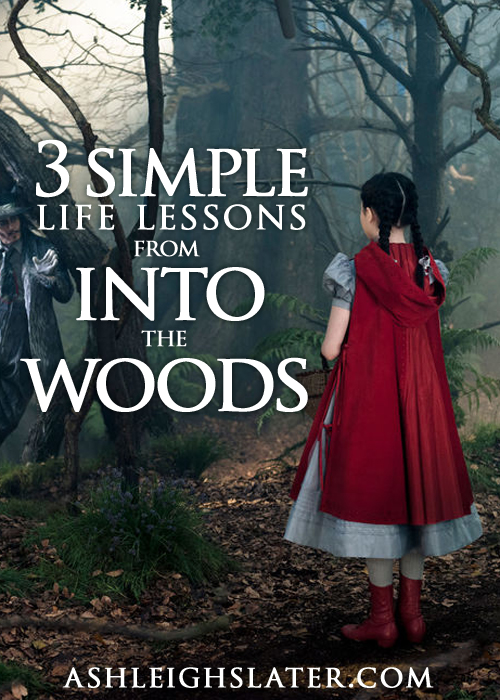 Here are three simple, but important life lessons you and I can take away from the film, Into the Woods.

“The wolf is really creepy,” my 9-year-old daughter whispered to me.

She and I sat side-by-side in a dark theater watching Disney’s film version of the Tony Award winning Broadway musical, Into the Woods.

Good, I thought at her words. After all, I’m not the kind of mom who wants the moral of the Grimm Brother’s Little Red Cap to escape my children. Yes, be wary of strangers. Please, obey your mother. Absolutely, stay on the path.

If you’re unfamiliar with Into the Woods, Little Red Riding Hood and the Wolf are only two of a handful of classic fairy tale characters it features. This mash-up also includes Cinderella, Rapunzel, Jack and the Beanstalk, and an original story of a baker and his wife. In it, each character has a deeply held wish that they long to see fulfilled.

My three older daughters and I had first seen previews for the film a few months ago. Since I’d already introduced them to the original Broadway Cast Recording, they’d been anxiously waiting to see it. Pending the reading of reviews, of course. (The Broadway production’s content isn’t entirely kid-friendly.)

And how exactly was I originally introduced to the show myself? After all, I’m discovering that it’s a new musical to many. Well, you see, Into the Woods and I have a history.

My relationship with it dates back to my undergrad days at the University of Hawaii at Hilo. And the truth is, just typing that makes me feel old. After all, it’s been a good 15 years. But it was back then that I took a stage makeup class the year our theater department decided to perform this Sondheim musical. My end-of-the-semester project was to design and apply Cinderella’s makeup.

Because it has been more than a baker’s dozen in years since I saw the stage production, I don’t remember the original version in all its details. Which for me, is a positive when it comes to the film. Unlike some, I’m not of the opinion that Disney ruined it. Rather, I absolutely loved what they’ve done with it.

So, as I now reflect on the film, I realize there are three simple, but important life lessons we can take away from it. I think they are worth sharing here.

“The spell is on my house. Only I can lift the spell,” the Baker tells his wife, refusing to let her travel into the woods with him. Later, though, he realizes that it “takes two” to accomplish the daunting task of breaking the spell that’s left them barren and wishing desperately for a child. Throughout the story, additional characters come to see that they also need each other. That they are indeed better together than they are apart.

Just like the cast of characters in Into the Woods, we aren’t meant to live solitary lives. Solomon stated in Ecclesiastes 4:9-10:

Two are better than one, because they have a good reward for their toil. For if they fall, one will lift up his fellow.

We need each other. We need community. As Shauna Niequest writes in her book, Bittersweet: Thoughts on Change, Grace, and Learning the Hard Way, we need a “home team … your middle-of-the-night, no-matter-what people.”

Into the Woods is a great reminder that life – especially when it involves breaking curses made by witches who live next door – isn’t meant to be tackled alone.

2. Nice Is Different Than Good

After Little Red Riding Hood is rescued by the Baker from the Wolf’s belly, she sings one of my favorite songs in the musical, “I Know Things Now.” A big reason it’s my favorite is because my 9-year-old sings a mean version of it. In it, Red thoughtfully reflects, “Nice is different than good.” She realizes that the Wolf may have seemed nice, but his intentions were ultimately selfish … and, well, indeed creepy.

This is a great reminder to examine our own lives. Are we just playing “nice” with people to get something we want, rather than genuinely loving them? Jesus told his disciples that “no one has greater love than to lay down his life for his friends” (John 15:13). When it comes to the relationships in our lives, how are we being “nice” rather than good? Insincere and selfish rather than honest and unselfish?

3. Life Is Made Up of Moments … Fill Them Well

While the Baker and his wife discover that yes, they are better together, they often find themselves apart in the woods. It’s in one of these moments, that the Baker’s Wife shares a few passionate kisses (in the actual stage production, it goes further) with Cinderella’s prince. As she wrestles with her unfaithfulness, she sings, “Oh, if life were made of moments.”

Her song can serve as a challenge to always be aware that life is made of moments. Small ones and big ones that come together to form our life experiences and ultimately shape our character. As I watched the Baker’s Wife and the Prince choose poorly, I was reminded again of the importance of filling my moments well. Of choosing wisely and allowing Scripture and the Holy Spirit to guide my choices. As I write about in Team Us, the direction of our lives is determined by the here and now decisions.

What about you? Have you seen the film version of Into the Woods? What takeaways did you have? I’d love to hear your thoughts.