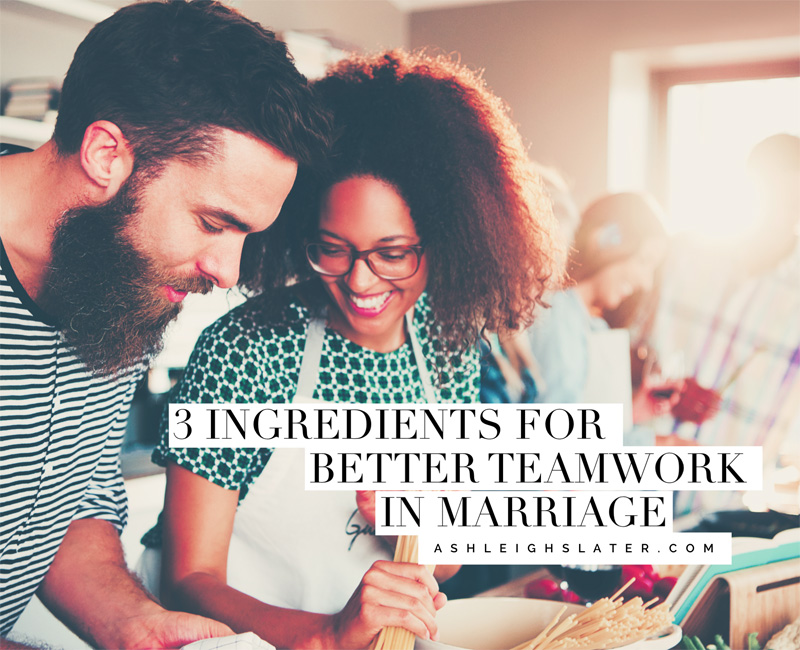 Are you struggling with teamwork in marriage? If so, here are three essential ingredients to improve your unity and togetherness.

In my single years, it never occurred to me how involved the simple task of cooking a meal could be in marriage. But perhaps that’s because I had yet to meet my out-of-the-box thinking, joy-is-in-the-journey husband, Ted.

It didn’t take long for me to discover that when it came to dinner time – or breakfast or lunch for that matter – his interests didn’t solely lie in the finished product. Ted wasn’t one of those meat and potato guys who was satisfied being offered a sirloin and some baby reds at the end of a long day of work. Sure, he appreciated it, but he wanted more.

Now when I say “more,” I’m not talking about a side of green bean casserole and some pecan pie. Though, of course, he’d eagerly welcome those additions.

You see, Ted cared about the process that went into making the dish. He wasn’t about to be confined to merely eating it.

This man wanted to hear a detailed list of the ingredients and was always willing to help chop, dice, and slice our way to a perfect mirepoix.

When it came to whisks, slotted spoons, and spatulas, he enjoyed digging through our messy utensil drawer to help me find just the right “tool” for a particular cooking method.

And if boiling water was involved, well, he even had tips for me on how to do that more efficiently.

Overall, I loved his interest and participation. After all, wasn’t this what marriage was all about: cooperation and teamwork in everyday life?

Had it simply been a matter of slotted spoons and boiling water recommendations, I think we’d have gotten along splendidly in the kitchen.

When Teamwork in Marriage Gets Dicey

Here’s where it got dicey. While I clung tightly to recipes, Ted loved to explore the limits of culinary creativity.

For him, cooking – like everything else in life – was an adventure. This last-born, free-spirited man of mine saw a recipe as a mere framework, a set of guidelines from which you were expected to deviate. If a chili recipe called for one jalapeno, surely it would be better to put in two and add a soreno. The spicier the better.

Kick it up a notch, right?

Not me. I approached cooking as more of a precise science. I followed recipes to the teaspoon – especially when it came to that beautiful collection of Williams–Sonoma cookbooks we’d received as a wedding present. I was the typical Type A, rule-following, oldest-born daughter. Who was I to question the instructions someone had meticulously labored over in an effort to perfect?

What it came down to was that we approached the actual process of cooking differently. Which meant that working together wasn’t as easy as pie.

In our early years, every time Ted attempted to throw something in that a recipe didn’t call for, conflict seemed inevitable.

“Um … that’s not listed here,” I’d inform him, as if he didn’t already know. “Are you sure it’ll taste okay? Shouldn’t we just follow the recipe?”

But he’d just keep muttering something about the “spirit of Augie” – that would be his friend and culinary hero – inspiring him as he threw one more pepper into the pot.

Well, I threw something else. That would be my hands. Up they went into the air as I exited the kitchen in a not-so-graceful manner. Fine, I’d let him finish making the dish. I’d go watch the Food Network.

Yep, that first year or two of our marriage had its cutthroat kitchen moments.

3 Ingredients for Better Teamwork in Marriage

Fortunately, we’ve since learned how to work together and compromise when it comes to cooking. For us, it’s boiled
down to three ingredients.

My continual questioning of Ted showed him one thing: I respected a recipe writer more than I respected him and his ability to make decisions. Once I realized this, I decided to let my creative husband be creative in the kitchen – that is if he’s the executive chef.

You see this respect goes both ways. If Ted’s the sous chef to me that day, he’s learned to let me approach it my way – which includes following the recipe. We’ve both come to allow the other to have ownership over a particular dish.

After tasting more than one of Ted’s Chopped-like meals, I soon realized that he generally has great instincts when it comes to cooking.

His rate of success has taught me to trust his decisions when it comes to meandering from the recipe. Most of the time, my taste buds thank me.

Likewise, Ted has come to see that I can create a good dish too. He doesn’t need to “intervene” to ensure it turns out well.

There have been times when Ted’s adventurous spirit in the kitchen hasn’t served us well.

For example, he discovered it’s best to stick with the tried and true, classic green bean casserole recipe. And that a few drops of liquid smoke in lasagna doesn’t give it a rustic flavor, it gives it an inedible one.

Then there are the times when it would have served me well to go with my gut and deviate from a cookbook.

In both cases, we laugh about the culinary failure together, as we remind each other of all our successes.

Great Training for Teamwork in Marriage

While cooking provided its share of challenges for us early on, I’m glad we didn’t give up trying to tackle dishes together. For us, the kitchen has proved to be a great training ground for teamwork in our marriage.

A version of this post first appeared at iBelieve.com on May 28, 2014. You can read that here.